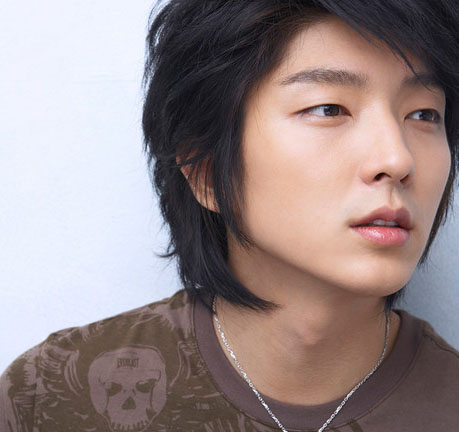 The festival continues through the 28th, and will be screening his latest project, Splendid Holiday (aka May 18), which won the Golden Orchid Award there. (His film King and the Clown was screened at the festival last year; his next release will be the joint Korea-Japan collaboration Virgin Snow on November 1.)

While I’m not a huuuge Lee Junki fan, I think it’s interesting that his film and drama careers seem to be taking off side-by-side. Okay, maybe his film work has the edge, but still; usually it’s one or the other. With the successes of My Girl and Time of Dog and Wolf, though, he’s building a drama resume along with his film one — which is a pretty good way of getting noticed overseas as well as at home. (Dramas tend to do well domestically and in Asia, while films generally have a more broad reach.)

Lee Junki announced that he’d be taking a short break after the festival before returning home to Korea. And hey, he’s in Hawaii — what better place to do it?

I know he's considered "pretty" but I have to say.. he's HOT as well ^^
I think he is also really talented. I have watched those two dramas as well as a couple of his films and my opinion is that he played his roles quite well -- as a new and rising actor. I especially enjoyed seeing the versatility displayed between his roles in King and the Clown and Time of Dog and Wolf!
So good luck to Lee Junki int he future hehe

I know he's considered "pretty" but I have to say.. he's HOT as well ^^
I think he is also really talented. I have watched those two dramas as well as a couple of his films and my opinion is that he played his roles quite well -- as a new and rising actor. I especially enjoyed seeing the versatility displayed between his roles in King and the Clown and Time of Dog and Wolf!
So good luck to Lee Junki in the future hehe

oh i so wish i was in hawaii right now.

I love the way you write (way too). Haha. Totally agree with you. I do understand why ppl say he's hot. But 'pretty' pops up in my mind first whenever I see him

what's the nationality of Blue Sorbet ? i really like their songs. thanks for posting it!

omg...If I had money for a plane ticket, I'd fly to Hawaii and stalk Junki! ;_; oooPppppAAAaa you're toooo pretty

Congrats to Jun Ki!
He's been the apple of the K-entertainment's eye for the last 2 years. Grabbing lotsa awards out there..
I think he's worked very hard to shed his feminine side (sorta) in MG..and I must say he's done quite a good job in TDAW (altho I didn't really like the drama). Hope he continues to shine ^^ BBASYA!

LJK is such a good actor and he definitely deserves the recognition. I absolutely loved him in Time Between Dog and Wolf. I haven't seen The King and the Clown though; I can't get hold of a copy of that movie. I might have to resort to downloading. Congrats to LJK!!! =D

This is one of the very few Korean outlets that accepts non-Korean credit cards.
Watch the shipping costs, though. DHL is the only realistic option if you live outside Korea, and only really economical if you order three items.

thanx for this post ^^
im a huge junki fan :D
i think he looks really good with the short hair he has now :)
can't wait to watch his new drama!

Congrats to Jun Ki!
im his huga fan too^^
he really deserves recognition for his part in the movie (The king and
the clown) nobody else could have done it better.
and thank Javabeans for the post^_^

Congrats, Jun Ki! Good for you!
I fell in love with him during My Girl. He has the looks, alright. And his hair is looking pretty good right now......
The project's he's been picking has been spot on as well....I can't wait to hear more about his new projects, but until then, a good break won't hurt anyone. He deserves it after working so hard!

Congrats to JunKi! =) And how I wish I'm in Hawaii to see him. XD But yeah, he really need a good break.

Congrats to Junki. He's a good actor who keeps getting better but more importantly he's a humble, grounded and hard-working guy with the sweetest, sunniest personality. His acting in Time of Dog and Wolf was just awesome.

congrats to Lee Junki... i'm not a fan of his either, but this is a huge achievement. he has a unique look to him :P

He is considered (way too) hot in Korea?

I thought he was the most talented actor in My Girl, cuz, to me, his crying/suffering seemed real, but, I thougth he was.......well......ugly!

but, im glad he won the award. hey, its not beauty but talent, right?

yeah im not one of legions of die hard jun ki fans. but i like his stuff just fine. just not the ohhhh he is so hot kind of fan. he's got looks i admit and i think his acting is fairly good. so kudos to him :)

Hey maybe be 80% pretty but at least doesn't look as pretty as some from Super Junior. He still has an air of masculinity that has been so hidden in this current metro sexual trend.

Is Lee Junki really a rising star? For some reason, I've always thought that he was Korea's #1 celebrity before Rain took over...
...maybe that's not right.

He's... got clean skin. Not saying ihave any dirty skin but i can't say he's very attractive and i cant say he aint. But the skin caught me.

My main suspicion is the agents or agency they are with.

I'm a MEGA-HUGE fan of him. But the first time I saw him, I thought he was a girl.....So maybe you're right. But way too....is a bit too much, don't you think? I mean, you can still tell he's a boy (when you take a closer look at his face.) It's just those really bright naturally pink luscious lips......*cough* Never mind. But he has everything. A lot of people call him pretty, but he's also very very hot. ^^ (Or maybe my opinion of him changed?) and he has such nice skin, I'm envious.

He's really hitting it off, isn't he? I think he might've been cast in the King and His Clown because of his girlish looks (I'd believe he'd pass for a girl if wears drag) but he definitely told everyone he's a good actor in there.

And also, no, he's a newcomer. Rain's been around a MUCH longer time than him. He might've done small things but he REALLY surfaced with the King and the Clown, which if you don't know was the highest grossing film in Korea EVER before The Host surpassed it in 2006. (it came out in 2005, so really close race there.) Lee Junki went up and up from there what with My Girl, Time of the Dog and Wolf and various other movies.