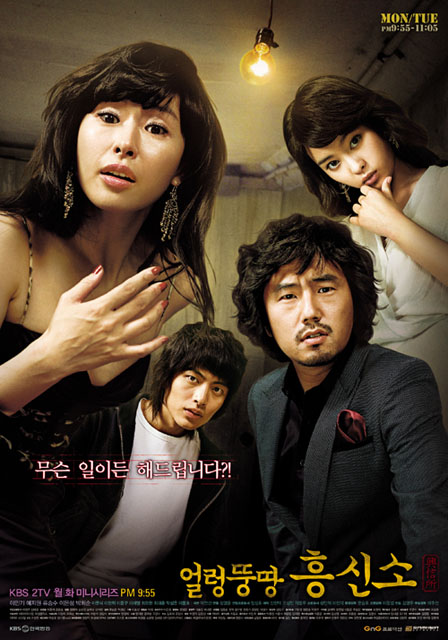 Lee Minki’s new drama actually sounds interesting (and not just because it’s Lee Minki’s new drama) — if a bit of question mark. It’s doing something different and, dare we say, risky? Who ever heard of a kdrama without romance? But I want to see if it works…

Note on the name: I’ve seen this drama titled on various sites as “Evasive Inquiry Agency.” I do not know what an evasive inquiry agency is. The way I interpret the Korean title is to mean an agency that’s bumbling, clumsy, comical. “Mixed-up” isn’t a perfect translation either, but I have my reasons for liking it the best out of all the other possibilities I’ve tossed around. (Extra props to you if you get my reference. 😉 )

Aside from Lee Minki, the drama also stars rising young actress Lee Eun Sung, whom you may remember as the young writer of macabre fairy tales and little sister Ji Soo in Que Sera Sera, or as the hot pre-op tranny in Dasepo Naughty Girls, or that psycho fangirl stalker chick in Epik High’s music video for “Fan.” Let’s just say homegirl has interesting taste in projects — but interesting in a cool, edgy way. 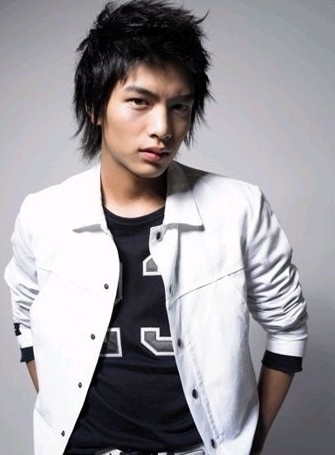 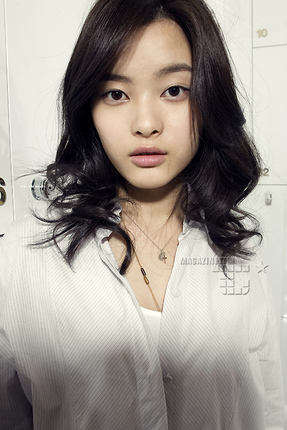 Here’s an article wondering the same thing I am (Source: OSEN):

KBS2 TV’s Monday-Tuesday drama I Am Sam ended on the 2nd with a lackluster 6.1% viewership rating (TNS Media). KBS hasn’t been able to put forth a buzzworthy drama all year. This has occurred one after another, when the expectations for these miniseries broadcasts have been at their greatest. Following the conclusion of I Am Sam comes Mixed-up Investigative Agency, notable because it leaves out the popular convention of a love triangle or rectangle relationship.

Beginning its broadcast on the 8th, Investigative Agency is a comic adventure unraveling around four young delinquents who happen to meet while treasure hunting. Differing from other dramas, the four leads don’t fall into a three- or four-way love story; rather, it focuses on their pursuit of the twelve golden treasure urns of Emperor Gojong. The drama aims to engage viewers along in the fun as its characters hunt for hidden treasure. 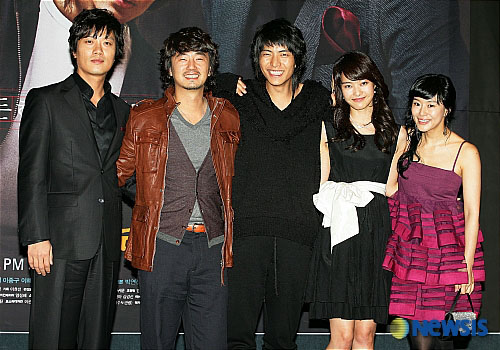 Writer Park Yeon Seon says, “While currently existing dramas focus on one or two people, this one depicts the four or five people as engaging in a game. Normally, when there are four or five characters, people think they’ll be paired up, but we treat melodramatic aspects with little importance.

“I was able to do this drama after achieving some measure of success with Alone in Love, which gave me the possibility of doing the drama that I wanted to do. I received a lot of support from KBS, who allowed me to to try my hand at this project without the large burden of ratings expectations.”

To date, many dramas have made sure not to leave out melodramatic story lines. Viewers are enthralled by love stories and romances that pull at heartstrings. Even in historical dramas, melodramatic stories are borrowed to add more entertainment to the drama.

Facing off in fierce competition on Mondays and Tuesdays, King and I and Yi San have both structured themselves around melodramatic stories. SBS’s King and I deals with one eunuch who’s been in love his whole life with the king’s woman, forming a love triangle with the characters played by Oh Man Seok, Gu Hye Sun, and Go Ju Won. MBC’s Yi San similarly employs a love triangle: Lee Seo Jin, Han Ji Min, and Lee Jong Su. Although the series weaves the dramatic events of Yi San’s life with the personal, it cannot solely indulge in the love lines.

It’ll be interesting to see whether the unique new Monday-Tuesday miniseries Mixed-up Investigative Agency, a comic adventure without love triangles and melodramas, can capture viewers’ hearts. The attempt at a new genre may attract attention, but if audiences return to their desire for love triangles, it’ll be tough for them to find the fun in Mixed-up Agency. Ye Ji Won, Lee Min Ki, Ryu Seung Soo, and Lee Eun Sung’s wild dash to hunt treasure now begins.

COuld you mean "The Mixed-Up Files of Mrs. Basil E. Franweiler"? I never got to read it as a kid but I hear it's a good book. Maybe I'll pick it up now. =)

At least Lee Minki looks kind of presentable now. I really couldn't take him as the love interest in I Really Really Like You. He was such a goof ball.

The title Lee Minki’s Mixed-Up Investigative Agency reminds me of a book I read as a kid, "From the Mixed-up Files of Mrs. Basil E. Frankweiler" :D

Me too it reminds me of that book. Which i acutally liked for a somewhat children fiction book. The movie was on HBO i think. It was fun.

But http://www.dramabeans.com/wp-content/images/act/Minki01.jpg
oh my Lee Minki!! he looks hot there. aside from the tragic hair.

Anyhoo, im glad too see something other than a saeguk. I hope they can succeed. Looks like fun. Im gonna catch this, if not for Lee Min Ki it for the writer's story. AIL was well written by Writer Park.

They have to have at least some type of romance right? I don't think I've ever seen a show without romance.

wow...i am so glad i get to see lee min ki and the girl from que sera sera in the same drama. I LOVED her in Que Sera Sera and Lee Min Ki can be such a goof ball when he wants to..This drama sounds fun! I dont really care that there is no melodrama or love triangles. It might be a good change...I am ok with trying new things and this project sounds really fun. I hope they are able to deliver well. At least I am almost positive Lee Min Ki and Lee Eun Sung will do a great job because they cracked me up in their previous projects.

I am really looking forward to it. None of the other upcoming dramas seem interesting to me...I have yet to find something to watch and this might just be it :D

Why arent there any good dramas to watch right now? I am so bored that i am actually watching Golden Bride. Now dont get me wrong, the drama is interesting by man does it draaaaaaag.....

haha. remember the story she wrote in QSS? How the wolf and Red Riding Hood fall in love and kill the Grandma coz she opposes the match? Hilarious!

oh god.. its by de same writer as Alone In Love... den i'm definitely going to pay full attention to dis.. though AIL was succesful due to their simple n touching love story i wonder hw a story without focus on love relationship is going to be... =)

Romance or not, so long the story/drama is good and the main leads are good looking, it's fine with me. Lee Min Ki....he is ok, goofy though. Ha..ha..

this seems so interesting, hopefully someone subs it so I can see it ^^

LIAR GAME is a jdorama without romance and i loved it, if the storyline is interresting why people wouldn't watch it? Hope it will be good.

I think it's about time that romance take a step back, and comedy a big step forward :D It does seem as if romance somehow gets in the way in most kdrama.

so true! especially when they throw in ridiculous angst-fests just to keep the story-line going.

Hi Dear Javabeans
this new series sounds interesting.
Last night I heared about it and Lee min ki and Lee eun sung.
I'm not sure but I think it's genre in http://www.koreandrama.org was Romance/Comedy.
but who care about it's genre? with or without Romance?
Thank You again.

I'm suppose to be working but what the heck the supervisor is not here so might as well take a well deserve break. Lets see treasure hunt, no love triangles, a little mystery, deductive reasoning, I think I will buy this series just for the novelty of it. Hope the subtitles turns out okay with this one.

Will tune in to this one for sure, not just because LMK is here...ofcourse that's the main reason I'll check it out ;-) Format is different & so it might just be the next d-series that will keep us glued to our tv sets.... after coffee prince, our taste for k-drama just went up a notch higher...

That dress, bottom pic. to the left, Marc Jacobs - LOVE IT!
And seems like its a good series too...=)

Although this isn't a new concept, I'm sure it's pretty unheard of, so I'm super excited about this series. I mean, no romance? Not even a hidden one?!

I miss Kang Tae Bong! I missed Minki!! ^ ^
"KBS hasn’t been able to put forth a buzzworthy drama all year."

I think KBS has underrated dramas! Dalja's Spring is my top1 drama this year then Capital Scandal.. both are really watch worthy dramas, just underrated I think.

Thanks for this post Javabeans.
Hunt for treasure without any romance between the leads? Err....don't know how well this will be received. I personally would like to see some romance in dramas. =)

HAHAHAHAHA!!! You're the best. I was thinking the exact same thing!
Can't wait for the next batch of summaries! Which drama will have the good fortune of being covered by you?

I love Lee Min Ki also, specially roles like this... :)

"...doing the drama that I wanted to do"
Does that mean this drama had been planned for a pretty long time? It seems as if Mixed-up Investigative Agency was a personal/pet project of the writer's?

Oh, I do hope Min Ki's degenerative arthritis doesn't affect his performance in the drama, his condition was noticeable in the interview he did for KBS' Entertainment Relay.

ooooh, lee minki!! thoroughly enjoyed mrs. basil e. frankweiler as a kid, so this ought to be interesting (hehe loose comparison but anyway not sure if making sense). looking forward... :)

I haven't watch it but the still pics on your synopsis of DJS just dont hit it well for me. I think one has to be too thin to look that thin on screen. I remembered having seen Jae Hee in Witch... and I thought if that's the fad in korean young men now I'd rather wait for 2008 when they've buffed. Not that I want too heavily built men, but just enough fat tissues in their faces won't hurt. I was bored watching Chae Rim's face on all about eve. But I like her face in DJS. After all the reviews I read about MIA, I think I'll watch it. I love romance but a good laugh would make one feel even better.

Hi Lee Min Ki ,
I am one of your audience. And I watched one of your TV series .
That is Dal Ja’s Spring . I do like that TV series. And you are so handsome .
And I do like your style. I want to be like you. I am from Myanmar Country.
May you success in your life as you want !
I will be your audience forever.
I will love you forever .
TRY HARD, Li Min Ki !
Your audience,,,,
Thut Htet Aung

I want a Kang Tae Bong.

where can I get one? huhu!

I love your posts!