Lee Da Hae is expanding her horizons — as a singer. More specifically, a rocker chick.

I’d seen these photos when they were first released about a month ago and just assumed they were for a run-of-the-mill photo spread. But apparently, they elicited enough interest from the public to merit a digital single to go along with them.

The cute and sexy actress became a household name in last year’s My Girl (she was also notably in the 2005 thriller drama Green Rose and this year’s romantic comedy Hello Miss, but the latter was a sore waste of her talent. She’s also in the upcoming drama Bandits (or Robbers) co-starring Jang Hyuk). Now, she’ll be unveiling her single, “I Love Rock & Roll” (the Joan Jett cover, I presume?, but with new Korean lyrics) at the 2007 Mnet KM Music Festival on the 12th. The proceeds of the digital single will go entirely to funds like the Donors Camp and to benefit underprivileged children. 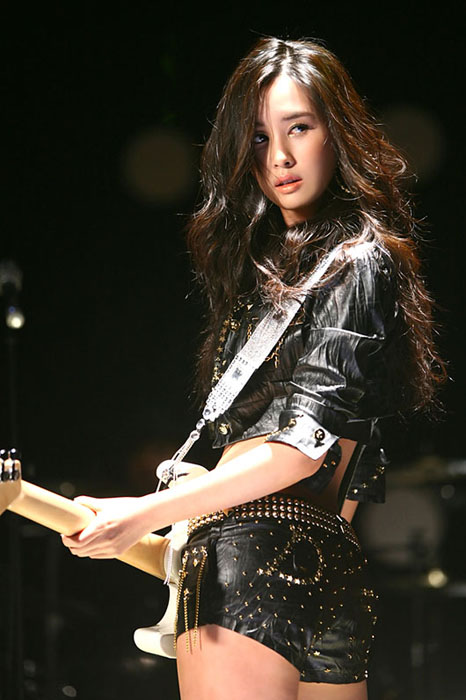 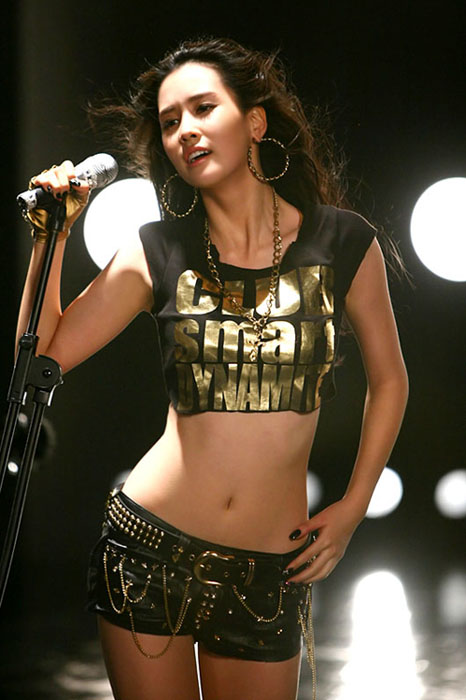 She actually looks as young as she's suppose to be....and the booty shot is nice. :)

Shucks! she's so sexy. Her long torso really complements or fits to low waist shorts. I think this is the first time i saw somebody that can really carry that low waist shorts perfectly and sexily without looking like a cheap girl (shucks i'm so lost for words, saying it in tagalog will give a better description: bagay na bagay sa kanya). I loving her more that ever.

the question for me is....can she sing? I mean, Ive been her fan for a long time, but ACTING and SINGING is different. Well, if she's bad, at least her face and body will make up for it. (like most "singers" these days....)

I don't know, I don't think she can sing. Here's hoping for the best...cause I just LOVE this girl, and I'm hoping to see her rock as an MC this year for KMMF. But singing?......good luck Da-hae!

And no dancing sexy, please. In front of all those male gasoos, damn it, I'm going to be so jealous! Definitely not like the CF, please!

She does look sexy, but she looks so thin in those photos!

I think she looked prettier in My Girl.

yay, da hae!!! i'm not a fan of her singing voice, but she's incredibly pretty... so her single might do well. :D

p.s. javabeans, i love the new comment preview feature... (and the new headers, and the other tweaks on your site)

actually I'm not a really big fan of hers...but damn! I didn't know that she would wear sometihng like this...I mean, I thought she's the kind of lady who's conservative..I didn't think that she would go this far...not that I'm complaining..come on..the girl's hot..who would dare complain..haha -_-

thanx for the news chinggu! =)
I didn't know she was going to release a digital single for this event. So excited now!!
Well, as a fan of hers, I really honestly don't know if she can sing. I've seen 3 different versions of her rocker chic CF, and if that's her voice, I'm sorry to say that singing's not for her. And I'm quite weary for her performance.. cos I don't think the rocker/sexy dance fits the song.. she was quite stiff and doesn't exude the sexy appeal altho she's in a sexy outfit. But she does look good in still pics tho..

haha.. i saw the vid and it wasnt that pretty! hahaha

Thanks javabeans for the news... ive seen these pictures from her thread at soompi... i like her in these shots... anyways i'm really excited on her upcoming drama... but has she confirmed yet? Given the main plot line, would you care to give us your initial thoughts about it? Thanks again!!!

ooh. i don't know if i like this outfit. actually, i'm pretty sure i don't like this outfit. its giving me some britney spears flashbacks. hopefully after this she'll have gotten the "rock star diva" out of her system for a while.

=] I don't think her face is too pretty but her body is nice. She has a good balance of her torso and legs. Cute butt too! Lol, I sound like such a perv. I loved her in My Girl, I just wanted her to lose the side ponytail. She had the same hair ALL THE TIME!!!

she's pretty but the mv was a bit embarrassing..

i saw the video for this and the only thing i could say while watching it was..."WTF?" O_O

it is so AWKWARD! lol...the woman cannot dance...she looked so confused! lol...I felt embarrassed for her ...

she should definitely stick to acting...

My thoughts exactly!! People keep raving about actresses like Song Hye Gyo, who is also very pretty, but I think Lee Da Hae is absolute gorgeousness wrapped in a package.

she can't be all perfect can she? I'm semi-glad she can't sing...the video was horibly awkward though - didn't they screen test her before letting her do it -__-;;

To all,
I enjoyed and appreciated Lee Da Hae's cover of my song "I love rock n roll."
When I wrote it, it was intended as a song of playfull seduction, and as an actress this young lady has interpreted the lyric and original concept of the song perfectly.
Those of you who are so knee jerk snap-critical, please don't be so judgemental of this pretty lady, who in my opinion has got it right on my song!
For me this is personal. I have also done recording in two languages (English and Japanese) and I repect anyone with the guts and ambition to do the same.
She should be applauded for her bright life spark!
Those who are critical of her are probably either jealous, blind or deaf.
All the best,
Alan Merrill

whoooa..your so sexy!! nice trans4mation!! i like it..im one of lee da hae's fan!

Please excuse me, can anyone enlighten me the address of Miss Lee Da Hae's official website?

i thought they are couple in true life *whispher* (giggle)

SHE'S CUTE! I LIKE HER ROLE IN MY GIRL! WHEN WILL LEE DA HAE AND LEE DONG WOOK BE PAIRED UP AGAIN IN A TV SERIES OR MOVIE??????

AFTER MY GIRL, I HAVEN'T HEARD FROM THEM ANYMORE. IS SHE AND LEE DONG WOOK STILL TOGETHER, I MEAN ARE THEY STILL CLOSE TOGETHER UP TO NOW, EVENTHOUGH WOOKIE IS STILL IN THE MILITARY????
I LOVE BOTH OF THEM AS A COUPLE