And the first celebrity couple outing of 2008 is… 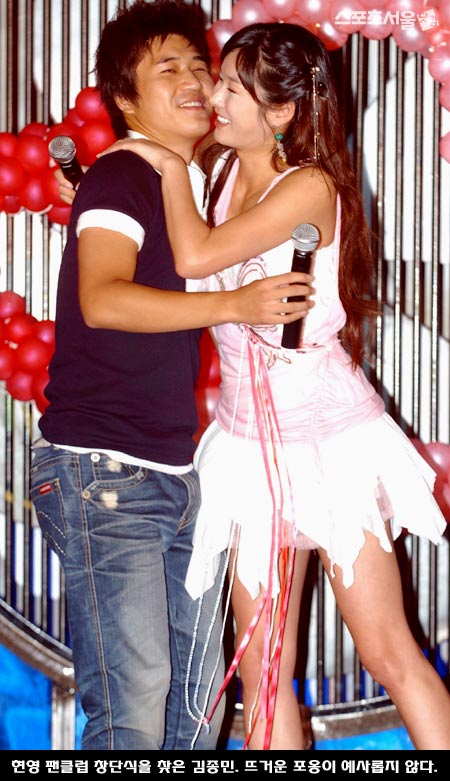 It’s still 2007 here in the States, but it’s the new year for Koreans, and the first celebrity couple of 2008 have confirmed their relationship. It’s one that may seem a bit odd at first — sexy, leggy Hyun Young (31) with the high-pitched voice, and the always-laughing jokester Kim Jong Min (28).

Both are television personalities who have made numerous appearances on variety shows like Heroine 6 and X Man. Both are also singers — Kim Jong Min’s with the pop group Koyote and Hyun Young released her own dance-poppy album, although I really think of her more as a novelty singer than a serious pop star (oxymoron?). And, of course, Hyun Young is also an actress/comedian (which is the role I think suits her best), from dramas like Bad Family and movies like My Wife is a Gangster 3 and the action romantic comedy co-starring Lee Dong Wook, Choi Kang Romance (aka The Strongest Romance, aka Perfect Couple).

They met while both appearing on KBS2’s Happy Sunday Heroine 6 program, and have kept their dating on the downlow for the past year.

Kim Jong Min just began his military duties at the end of November 2007, but had time off to spend the end of the year with his girlfriend; cameras caught the couple at the end of a date; check out the pics below the cut. 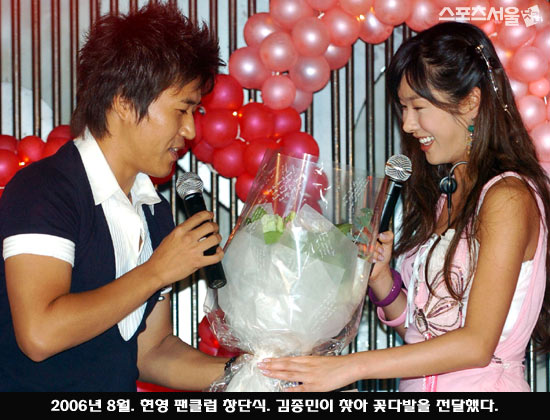 Sugarbowl – “오늘밤” (Tonight). This song reminds me of Jamiroquai’s mix of funk and rhythm — if ever a Korean movie wanted to capture their own brand of Napoleon Dynamite-esque dance brilliance, they oughtta use this tune. [ zShare download ]

“On her way to meeting Kim Jong Min, Hyun Young
enters the parking lot of a certain apartment complex in Samsungdong” 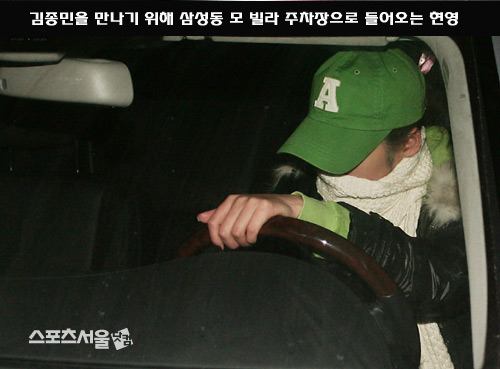 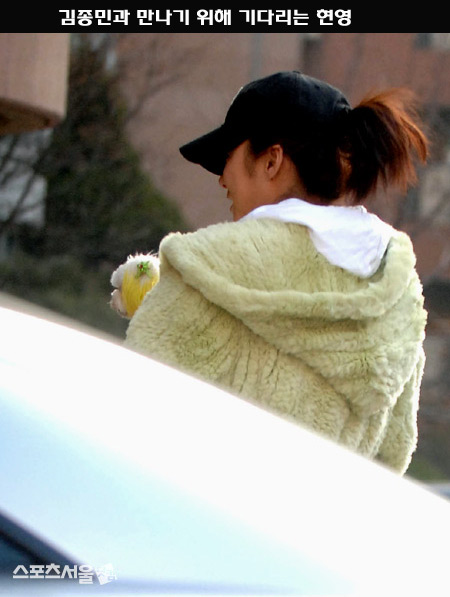 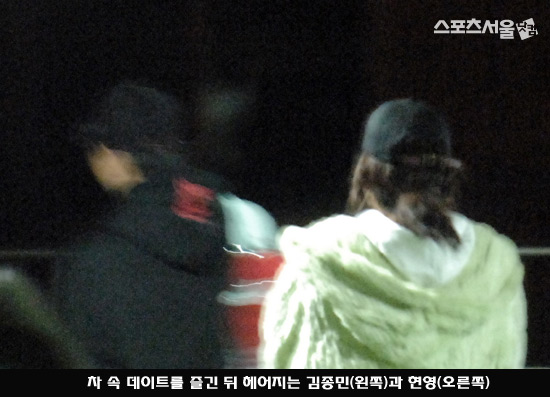 Despite seeming incompatible on first glance, a friend of Hyun Young’s said, “Hyun Young fell for Kim Jong Min’s reserved charm.” Apparently the laughing, joking energetic pop singer we see on television programs is really much more quiet in his personal life. Also: “Hyun Young likes that about his personality. Whether she’s happy or sad, he’s there behind her to hold her with out a word. She fell for his warmth.”

Another person close to Hyun Young explained, “In this past year, she’s had to deal with various difficulties and gone through many troubles. During those times, she’s gained so much strength from Kim Jong Min, who looked after her in silent support.”

wow they're sorta an unlikely couple but Kim Jong Min has such
a great personality ^^ i hope things go well for them.
thanx for sharing and Happy New Year's :D

Aww I wish them well. KJM is too funny!

oh my! I remember her denying the scandal between her and KJM on YSMM, but it never occurred to me that she was lying! So they really are a couple! They're adorable! :) I bet KJM is a great boyfriend.

aaw! that is so adorable. i bet they have lots of fun together! they both seem to have such wacky personalities ^___^

so that's her..i watched her before in some shows and movies but i never really knew who she was....

WHAT?!!! No waaayyy. Lol, this is a total surprise. I have always liked KJM, he's so goofy.
But I guess I shouln't be surprised, I remember I saw a show where they had him do a lie detector test and toward the end of the test they put pictures of different women among then shinji, whom he had no reaction to, and Hyung Young, who made his heart race. Out of all the women shown to him he had a BIG reaction to her.

I wish them both well, I'm really going to miss him. I had no idea he had already enlisted, I was wondering why I wasn't seeing him in shows like vitamin and others. Now I know.

HAPPY NEW YEAR EVERYONE!!!! May the year 2008 bring lots of prosperity for all of you and lots of pleasant surprises.

wait, so they are out? as in she and he have made a statement or pple are saying because of their proof (ie. the pix)...

well they seem like a good couple. i always wanted her with brian because they laugh and have a good time but it's the same with kim jong min ^^ they both are funny pple and seem to be the types who are serious in their real life. congrats to those two!!!

lol..you got that right ;D kim jong min, though he acts all loud goofy (and at times dumb), is actually quite smart and reserved off camera. i'm glad he's found his other half :D

This is too coincidental!

I JUST finished watching an old episode of YSMM where they talked about Hyun Young and KJM's "scandal." I totally thought it was for fun but...ho ho ho...lol.

Normally I would feel strange but after seeing so much of BOTH of them on various shows...I guess this is standard for me. haha. Great stuff...

YAY!!! I'm so, so happy for them. I never thought that that old scandal of theirs could be true, but now it turns out that their denials were all lies, lol. They were really cute together on Heroine 6, and I adore Kim Jong Min. What great news to start the new year off. :) Best of luck to them both!

I don't know them, but good for them. Paparazzis are everywhere.
Happy New Year Javabeans and Everyone!!! Thanks for a fun and interesting blog of 2007. Lookin' forward to another one this '08.

Hyun Young's such a lucky girl...I also wana haf a BF like Kim Jong Min. He's so adorable and cute in shows..

HY must get a lot of laughs and jokes from him. :P
Anywayz, congrats to the couple

i've heard that KJM is super super nice and stuff in real life! :] that's so sweet

This is such a surprise, I don't know what to say.

Kim Jong Min and Hyun Young? I thought...woaaah. hahaha, whatever happened to Shinji, KJM? Ahahahaha, well I wish them the best of luck and possibly a happy future. Hehe.

i adore kim jong min with all my heart and hyun young is such a nice person too..
im so happy for them
shin ji is said to be dating that former nrg member.. i forgot his name

Aww.. wow.. I never thought KJM would be the silent type..
That's nice to hear. Nice they have each other... I wish them the best this year! Hope that they can endure the long service KJM will have and be strong.

I have heard about their 'scandal' last year...so apparently this is true. I think they make such a cute couple..KJM seems like a cool guy and Hyun Young seems like a nice person too. Good luck to the both of them in their love life.

Stawr : I heard that Shinji is engaged to Lee Sung Jin (NRG)...so no chance for Kim Jung Min..hehehe.

I really like KJM, he made Real Romance Love Letter more funnier!

they are both adorable and i think they complement each other. i love them both. i hope it will end in the altar and lots of kids (^-^)

that's too bad cause Kim Jong Min is so cute...i was hoping there would a chance for us...^^

They're not confirming anything at the moment, but I hope it's true :)

yay~ I loved them in heroine6,, they were teased out a lot too, kjm always picked her as a partner but hyunyoung dont wannabe with him and seemed irked at him... but they were together there a lot, and not to mention in other variety programs theyve appeared in.. I guess it started from there ^ ^
happy for them (:

wow didn't even know they were that close to each other. but happy for the pair coz kjm seems to be a great guy and hyun young is a seriously funny lady. i think they make a cute couple.

Aww, I think they make a lovely couple. Hyun Young comes off as ditzy cute, and I personally think Kim Jong Min does too.

Tuning in to the MBC Awards, I recognized Hyun Young from her small role in Hello, My Teacher (Biscuit Teacher And Star Candy.) Although she had little to do but sit and be pretty in that series, it was more than enough to get my attention. She is very beautiful and seems to have a bubbly personality that appears to be much more than an affectation.

If this guy is cool enough to have earned the way to into this woman's heart, he must be more than alright. I wish them all the happiness in the world.

kimjongmin <3
i always thought hyunyoung was a bit over the top..overly giddy and ditzy.
but maybe shes different when the cameras not rolling
she better appreciate kjm! hes so sweet cute and lovable!

they look like a cute couple, but hyun young seriously has highest, squeakiest voice i have ever heard on a woman in my life... every time she says something it makes me double over in laughter...

Wow! is there another guy like that on earth?.... of course - he must fall for me (wishful thinking)... too bad aint a cutie... well... romance... there should be a lot of that for everyone this year!

Wait, was this the same lady that had a funny video online that got a lot of votes?Wasn't she the girl in My wife is a gangster 3? In that movie she played a chinese interpreter for Zhu Qi (?) hired by a korean mafia (if she is that same girl, I think I saw her on some tv sitcoms (forgot if it was love letter or something) she's witty, I like her.

i love this couple, hope they have happy ending

i knew it alreadyy since i watched '100% happy sunday'.. KJM was allllll over her!! and she actually had somethin with him too.. ahhh congratzzz.. i wish uguys all the best.. yeaaa they must be a wacky couple!! i wish i have this kinda relationship too ^^