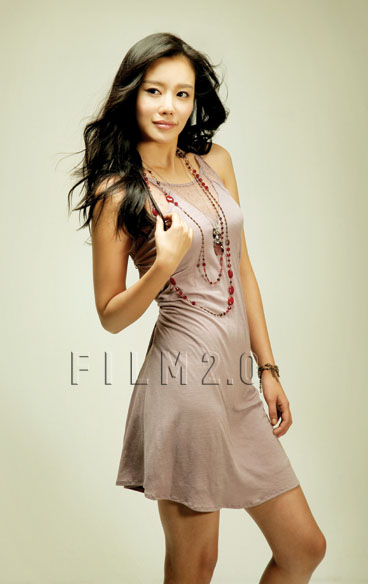 In more casting news, actor Kim Ah Joong has finally decided upon her first project after she skyrocketed to fame after her 2006 film 200 Pound Beauty became a sleeper hit. She’s in early planning stages to appear in director Song Hae Sung’s upcoming fantasy film Melos (meaning “song” in Greek), produced by Crayon Pictures and DRM Entertainment. The director’s former projects include Our Happy Time and Failan.

In the year following her rise to stardom, Kim Ah Joong’s become one of the most sought-after new actresses, and rumors flew that she’d been approached to appear in Oldboy director Park Chan Wook’s next film Bat, Choi Ho’s Go Go 70, and others, but those projects did not materialize.

Melos is a different kind of melodrama that depicts the love between an insurance agent whose wife committed suicide and a visually handicapped woman who’s spent one year in a vegetative state. Communicating via the two characters’ fantasies, they develop a mutual sympathy and understanding. Kim Ah Joong displays deep, sensitive acting as the prickly, visually handicapped character in her first melodramatic role since her acting debut. Top male stars are currently being considered for the lead role opposite Kim, and the film plans to start shooting sometime from late January 2008 to early February. The fantasy elements will require much post-production special-effects and CG work, and the film will release around Chuseok time.

The role sounds like… um… kind of a drastic shift, doesn’t it? Well, give the girl props for not trying to “ease into” her next role after playing a character who wasn’t too much of a stretch in 200 Pound Beauty. Don’t get me wrong, she was good in 200 Pound Beauty — sweet and likable, which is key for a light-hearted romantic movie like that. But I’m interested to see how that translates in playing a damaged and difficult personality in the new project.

Though I liked her in 200, it seems like it's put-up-or-shut-up time for KAJ. Good luck to her on this project!

Not really a KAJ fan but, this a chance for her to prove herself.

i liked 200 pound beauty. the topic was really nice and touching. i cant wait for this one. i do think KJA has talent. maybe not the best but i think her's is ok. her first daily drama she did well.

well... she was damaged goods in 200 pound beauty
and now she plays a similar role, just one with more depth in the character.
she's also got the sweet, innocent crying act down

the plot is too ..ugh

don't think i'll be able to watch that...its too much... true, love conquers all, but do they really have to make it that complex and heart wrenching??? blind, human vegetable, suicide...and on top of that he is an insurance agent?? thats just a synonime for depressing life, that and being a banq teller (supposedly)...

well, we never know...it all depends on the script and director... but for now i'll keep sighing...ugh!

well, she's really a good korean actor. she acts very well. she proved it from the series jang bogo. and i believed shed do her best to portrait her character in 200 pound beauty.. i never watch it yet but still hoping to see it soon... good luck to everyone...

well, she's really a good korean actor. she acts very well.. she proved it from the series jang bogo. and i believed shed do her best to portrait her character in 200 pound beauty.. i never watch it but still hoping to see it soon... good luck to everyone...

i love kim ah joong so much... d way she act,d way she deliver ....i wish that she will come here in the philippines

She was very amazing in "200 pounds beauty"..
i loved her act very much...
She's a good korean actrist...
And she had a pretty face.. Perfect..!!
She's really a beautifull girl..

I love your movie very much... You really realy look terificly wonderful when you sing Maria. Love you>>>

love your movie very much… You really realy look terificly wonderful when you sing Maria. Love you>>>

You is beautiful girl. I love u kim ah-joong

KIM AH JOONG YOU ARE AMAZING AND YOU HAVE A BABY FACE AND YOUR ROOLS IN EMPEROR OF THE SEA IS VERY GOOD I LOVE IT AND YOU ARE VERYYYYYYYY NICE
SEND A MESSAGE IF YOU CAN.THANK YOU
SAFA

Kim Ah-joong u r my best star that i ever had in my life so far.In 200 pounds beauty u r super perfect and cool.U looks so cute and beautiful in that movie.The most cute part for me is that when u sings a song "Byul" in the studio.Songs sang by u are also my always favorites songs..

No more words to tell as it's seems less than less as i goes describing her.Finally am a great die hard fan of u...Miss u and love u so much..

wow another project for her... go Kim ah joong! I will support you no matter what... aww I miss GDB and HJS tandem already...