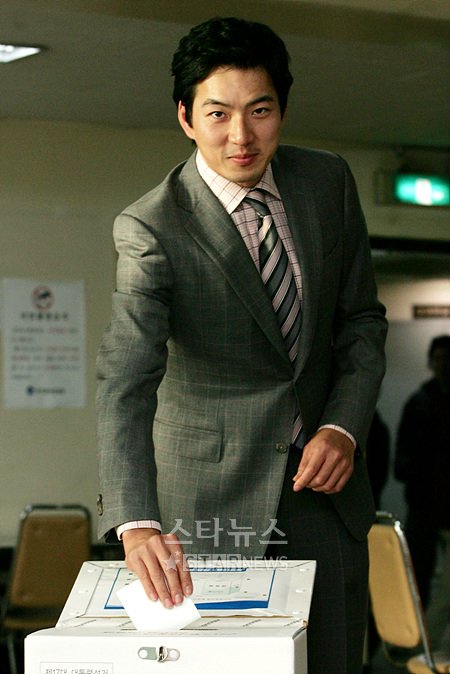 Or perhaps the question should be: Who’s getting attention for voting?

On the 19th (yesterday in Korea if we’re going by the time difference), Korea held its presidential elections. (Psst. Lee Myung-bak won.)

As for voting — turnout was low, but that didn’t stop the celebrities from showing up to exercise their civic duty. As with anything, people are much more interested when a famous person does it! (God I feel shallow).

Lee Young Ae: The A-list actress got up early to cast her vote at 6:50am: “I’m a morning person.”

Actress Kim Hee Sun arrived at 4pm in Kangnam to vote quickly and speed away; her husband voted at a different station, since the newlywed couple’s marriage registration paperwork isn’t complete yet. 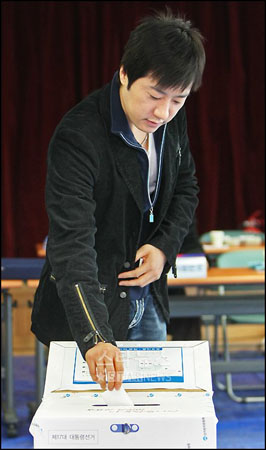 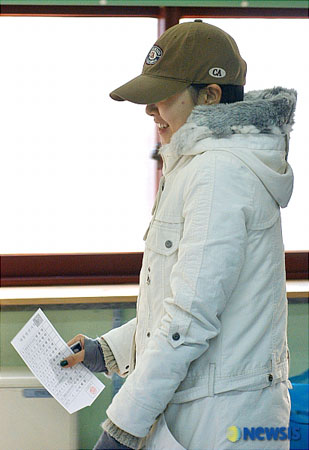 Young stars, particularly 1988’ers who just became of legal age to vote, were of especial note.

A-list star and university student Moon Geun Young was one such first-timer: “My first vote! I’ve become an adult.”

The Wonder Girls’ Yoobin made room in her busy schedule to vote early, arriving at her polling location at 6:10am. Singer Younha said, “I was excited and nervous to participate for the first time.”

The members of Dong Bang Shin Ki, who’d been abroad in Thailand for a concert on the 17th, flew back home to participate as first-time voters. 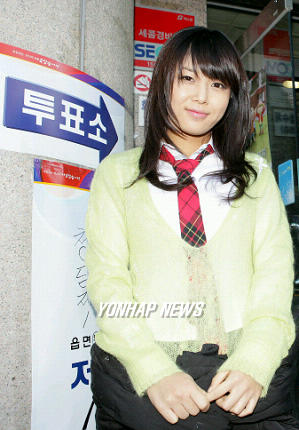 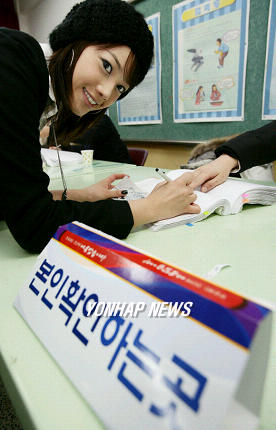 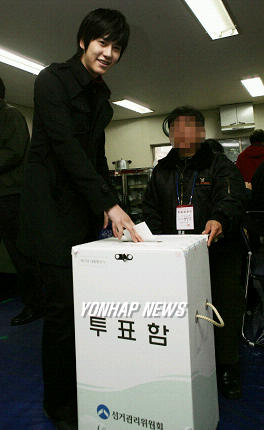 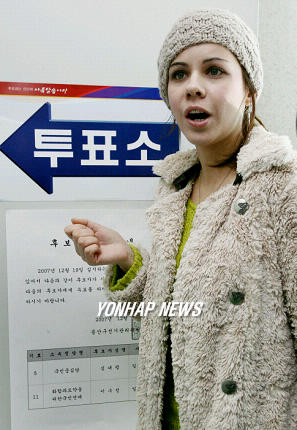 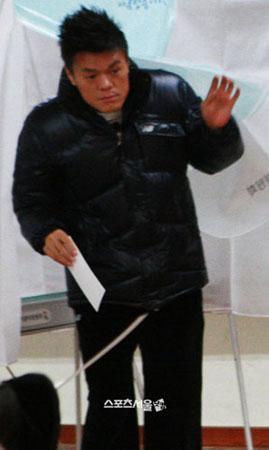 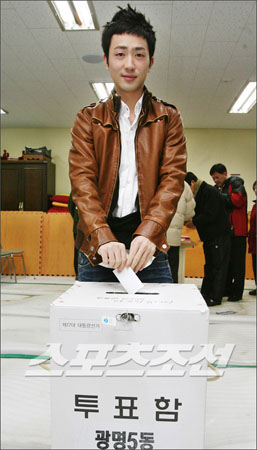 Spouses Park Jin Young (above left) and Yoon Tae Young kept mum about their vote selections. Uber-producer and pop-tart svengali JYP shook hands briefly and exchanged greetings with others at his location after casting his vote, and left with his wife a few minutes afterward. When asked if the couple voted similarly, they answered, “That’s a secret.”

Lee Jung Jae arrived at the wrong polling station, showing up first at a location in Cheongdam, and dashing off to find his correct location. However, because of the excess of crowding he wasn’t able to vote, settling for assuaging his voting disappointments by signing autographs for voters.

Meanwhile, although she’s not a 1988’er, it was also a first-time voting experience for Han Ye Seul, who’s lived most of her pre-acting life in the States. She gained Korean citizenship three years ago, and explained, “I don’t know much about politics, so the choice was difficult for me. But I thought voting is something I should do.”

Ahh, the uninformed voter. My favorite. 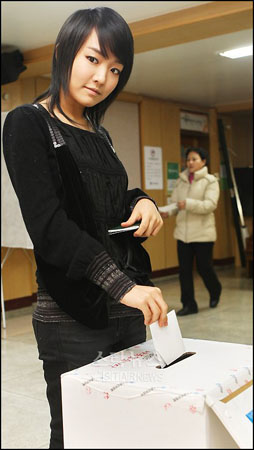 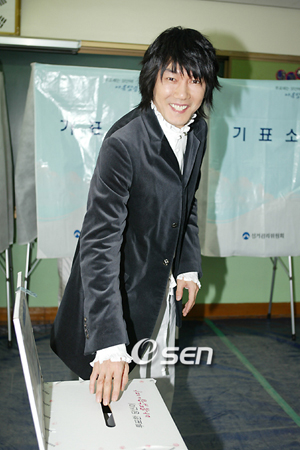 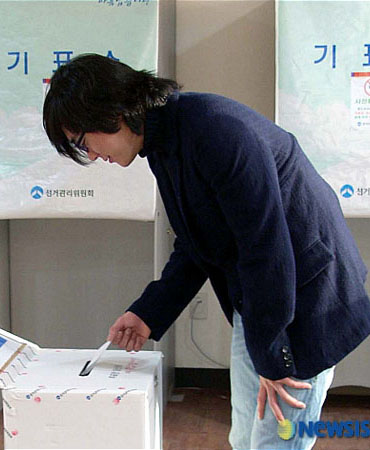 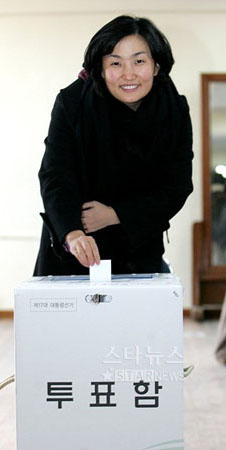 It's nice to see all these people exercising their right to vote. It sets a good example and keeps the ideal of freedom and liberty alive. Kim Myung Min looks really cute. Hee, hee.

But why oh why is it necessary to put the running count on the bottom part of the TV screen (in a much bigger band than the usual breaking news or whats on next ticker) and update all the fields (including total votes counted, percentage vote of front and second runner candidates, and lead of former over latter, as well as the actual votes for each candidate so far) completely once a second (when once a minute would be perfectly adequate). This ruined today's episode of Insoon on the KBS stream, since the bottom fifth of these carefully composed images was completely hidden behind this mass of distractingly flickering superfluous information. Especially superfluous because the unassailable lead was perfectly obvious, so second-by-second notification of the precise count can have genuinely interested absolutely no-one.

It's really nice to see people vote. I hate it when people use flimsy excuses like "I forgot to vote", or something. It's so important, and I'm glad these stars are setting good examples by doing so.

Wow...I didn't know Korea still did votes with paper. I don't get their advertising tactics - people singing in the streets and having a theme song with your name doesn't exactly shout, "I'm president material!" Who knows who vote for who? Too many candidates >_

Voting is important definitely. Glad to see some of the celebrities bringing some much needed attention to it.

I, personally, can't wait until the US primaries coming up and then the actual election in November. Can't come soon enough. =/

so his name was Park Hyun Bin. Ha.
I like his song, even though I dont drink. Khhhhhhhhhhhh

This reminds me that I still have to register to vote. I know, I'm bad.

good to see...maybe it will influence more people to voice their opinions...

60% voter turnout is higher than any of the US presidential voter turnout during the last 30 years. I think it's absolutely awesome that many Koreans (especially the young stars) take their civic rights seriously. Wow, those polling places open really early.

Ah, my parents woke up early (and woke me up in the process) to watch the news on KBS World. Ah, ha, I have no idea who won, but I saw someone had over 50% and one guy over 20%. Makes me feel I should be more into politics so when I turn 18 I can vote (became American citizen last year, yeas)....naah~

Totally getting a kick out of Larissa voting, for some reason. ^^ It's cool she became Korean.

That's good that they're voting!
Yeah, it's weird how most people don't vote...
I heard in Australia, everybody HAS to vote or else you get fined...

I love song il kook and his songs.I love soo ae too.