So not cool. Allegedly. 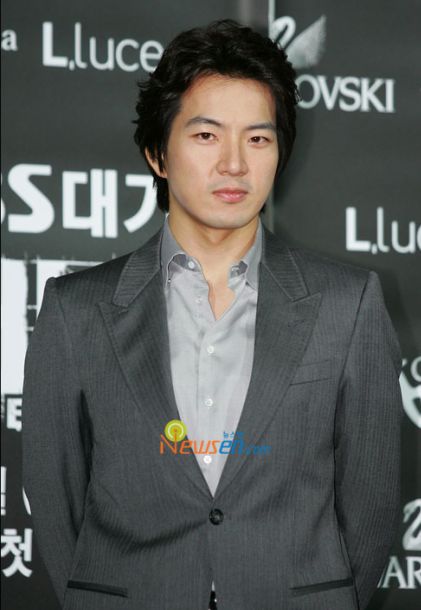 Jumong and Lobbyist actor Song Il Kook is being charged with violent assault of a female reporter.

Denials and allegations have been flung back and forth — he hit her, no he didn’t, he never laid a finger on her — and the actor’s side is preparing to countersue.

The alleged incident occurred a week ago on the 17th, in front of his home. According to the plaintiff Ms. Kim, a reporter for a monthly magazine, she’d been waiting alone in her car near his home, intending to request an interview about his upcoming wedding (which was announced recently). She got out of the car while talking on her cell phone, and reached out to hold the actor’s right arm. He shook her off, striking her in the face, and broke one front tooth while shaking loose three others.

Naturally, the actor is denying the charge. He claims to never have touched her at all, breaking her tooth through sheer mindpower instead (kidding! — but you knew that). Song says the charges are groundless and intends to sue her back for libel.

The two sides tell such differing stories that a full police and legal investigation is inevitable. At this point, more details aren’t forthcoming, since both sides have lawyered up and are being careful about answering questions.

It’s hard to tell what’s truth and what’s fiction — or, at the very least, exaggeration — in cases like this. For instance, it’s possible he hit her accidentally (as a few papers suggest), in which case I doubt people would blame him — but then why say he never touched her? And I doubt a reporter would deliberately break her own teeth, but just because it’s improbable doesn’t make it impossible.

P.S. FINALLY off from work and I am soooo ready to relax. Unfortunately, there's something as "bringing work home" as my boss would say. Save me?

she could have held onto his arm so hard that when he shook it off, her own hand flung back like as if it was attached to a bungee cord and smacked herself.

Except he claims there was no physical contact. She says she wanted to let it go if he apologized but now he's angering her by lying. He says she's lying. Ah, the drama.

Who would let go something like that if an apology was given? I don't know the real story behind this so I couldn't say which one's fault it really is but I'm a little skeptical about the reporter saying she'd let it go if he apologized. I lost a tooth and got 3 shaky ones and I'd just let it go?? If it was as how rocketfuel described it then maybe I would say the same thing but if it was totally the actor's fault then I'd sue the hell out of him!

If he really did hit the reporter.. then wow.. he's a jerk. if not, then I hope his name is cleared.

but he seemed so nice during his street interview thing! he even brought the reporter's wife a present. maybe he was drunk?

maybe the reporter was given an ultimatum about getting an interview with SIG and unfortunately, he refused since he doesnt have anything to discuss yet.. so to get back at him, she asked someone else to box her and pointed at SIG as the wrongdoer.... lol....

i couldnt imagine it...

after all the praises from the media and people surrounding SIG he gets into something like this...? it's really impossible.. having read also that she'l forget it when he apologizes? i think that only shows it's not true...

Why would you let it go with just an apology if a very famous celebrity smacked you so hard that it knocked out tooth? And why would you deny any physical contact & sue for libel, if you were at fault, when everyone knows that the truth will eventually be revealed? Hmmm...this one's tricky.

This sounds confusing, because I don't see the logic behind accusing someone famous of knocking out your teeth for NO reason. To make him look bad? Why? For the heck of it?

But I doubt that he would hit her purposely too. Eh.

Good summary. Who knows what the story is. Assault is wrong. I also can not approve of someone stalking a person (even if it is a "celebrity" and you say you are doing it for a job). She could have requested an interview through his management. I don't like the waiting outside someone's home because you never know what someone's intentions are.

So has there been any evidence in this case?

Did he actually "say" he did not touch her or was it one of those statements a publicist releases.

i say she assaulted him first... why would she go about grabbing other people's arms? paparazzis are scary... me too i would've "accidentaly" hit her... :P

seriously though... hitting a woman is a no, no... so we don't know who to believe... the act doesn't really match up with the guy's personality, and the girl's arguments hints that it may be true... hitting someone, anybody is disrespectful... for that reason i think both of them were wrong... the reporter is arrogant enough to stalk people, grab them by the arm and "requesting" an interview... and the actor needs to go to anger management program if he really hit her....

what a wonderful world we live in... lol

i hope it all get settled well.
just wondering. are you planning on watching any other drama besides hong gil dong any time soon? i miss your summaries but im not a historical drama fan..

Huh. It's not very easy to knock out teeth. I'm sure he would have scars if he hit her. I have a friend who once chipped a tooth while break dancing, but that only happened when his arms gave out from underneath him while he was doing a headstand, and he landed on his face. Think of all that body weight. Chipped one tooth.

Maybe both of them are lying? Maybe he pushed her away, and she hit her face on some hard object.

i really really doubt that SIG would something like that. i mean that reporter mustve done something to provoke him. i mean holding on to him and stuff. plus the story sounds so far off that she'd loose her teeth and stuff. i think if you'd knock out someone's teeth there'd be blood and scars and stuff.

maybe she's upset about not getting that interview... not that im being biased but i doubt SIG will hit a reporter. but he's a really shy person but a good one. his space was violated in a way.

well...i can see how he could say he never touched her...she touched him...so she's at fault right? it could have been a reflex on his part that resulted in her getting hurt especially if she was talking on her cell phone...her cell probably hit her mouth as he shook her off his arm....i can't see him being violent...of course i don't know him personally...but i think she initiated the incident and so it's really her fault...it would be like someone reaching out their hand into a lion's cage...if they get bitten, is it the lion's fault?

Ah. How the plot thickens ~

please tell us the result of this "paparazzi crazinesss" later, when there's news.
lmao. thanks!

there's an update on this story.

I don't believe that reporter story 'bout being hit by Sig ,i don't like paparazzi at all eventhough there r many pprazi too but they often made someone life's uncomfortable

I don't believe that reporter story 'bout being hit by Sig ,i don't like paparazzi at all eventhough there r many goodpprazi too but they often made someone life's uncomfortable