Birth of the Rich premieres, Pasta rises to top spot 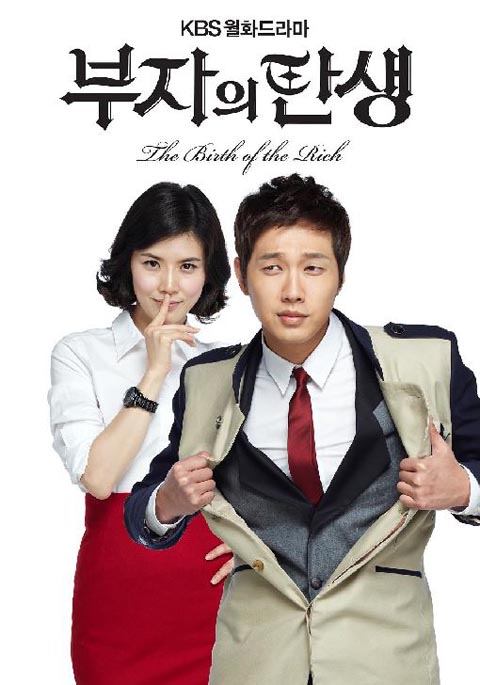 KBS premiered a new drama today, the light comic drama The Birth of the Rich, to replace God of Study. Although the first episode numbers were modest at 12.1% (TNS Media), the drama received generally positive reception for its imaginative and “manhwa-like” story and its refreshing cheeriness.

Also earning some praise is lead actor Ji Hyun-woo, who plays a man who grew up poor but clings to the belief that his father is a chaebol who will claim him later. He has a comic meeting with Lee Bo-young, an heiress who lives frugally (and whose reception was a bit more tepid than Ji’s). Nam Goong-min reportedly acquits himself well as a bad guy, as does Lee Shi-young playing a spoiled heiress. (I hadn’t been too eager to catch this series, but with mostly warm comments, I’ll have to check it out to see if it’s worth a whirl.)

In the absence of God of Study and its mid-20% numbers, MBC’s Pasta rose to first place with a series high of 19.7%. It’ll likely remain strong for the remainder of its run; it wraps next week with Episode 20. Not much changed for SBS’s historical drama Jejoongwon, which held with a 13.3%. Meanwhile, SBS’s bright and comedic Wish Upon a Star solidified its stronghold with a 19.0% rating.

I soo want to watch this

The only reason I opened this post was to ask if the woman in the picture had plastic surgery. her nose is so strange. anyone able to satisfy my curiosity?

Oh, I'll wait for your impression on BofR then. It sounds interesting, though.

As for Pasta, I'm still watching it and the only reasons are 1) the chemistry between the leads and 2)Alex. The story itself is blah, imho. I'm so not interested in anyone except Hyun-wook, Yoo-kyung, Kim San and Eun-soo. When the other characters are on screen, I'm soooooooooo tempted to fast forward. :( Am I the only one?

Yay for Pasta! My love for this drama is absolutely strong ^^ It makes me smile and after it ends, my heart has this warm feeling that remains for all day.

Mmm, if that's the case, maybe i'll give BORM a try. I'm not in a mood for a drama-filled series.

I'm not sure if it's the quality of the picture, but that is one insanely horrible photo-shopping! It's even more worse that it's oh so obvious LHW was ps-ed on top of LBY...

I think Lee Bo Young is notorious for having her whole face redone. If you check out her old photos you can barely recognize it's her.

I have a love/hate relationship with Pasta. I was into the first couple episodes and then I lost interest halfway and stopped watching. I've started watching it again recently and Pasta has officially won me over. I'll be sad when it's over.

Wish Upon a Star has had me addicted since the beginning. So glad to see the show's continued success. :-D

I took a quick glimpse at Birth of the Rich and was surprised at how thin Nam Goong min has gotten. I almost didn't recognize him. :-/

This drama sounds pretty interesting.....i'll have to add that to my list of kdramas!!
oh random question, but JAVABEANS can u tell me what the word "kindayo" means? it came up in a drama and i have no idea what it means!! im Sorry if i spelled it wrong but it sounded that way to me...thanks in advance!

@Sere, RunLolaRun: I'm with you two on Pasta. I watch it because nothing really interests me this season...that is, until I started Wish Upon A Star last week which completely got me hooked!!!

Now Pasta has become a time-filler as I wait for the next episode of Wish Upon A Star.

"kindayo" could mean "as a matter of factly"

I absolutely loved pasta in the beginning but its gotten kind of slow so i just scan through them now.

I know its off topic but does anyone know what Kim sun ah and Choi ji woo are up too?

OMG, I completely forgot that this was premiering! Glad to hear that it got positive reviews.

And NGM is a bad guy? Hrmmm.. That sounds exciting. :D

Their photoshop skills are horrid.

Just to clarify, it's not that I hate Pasta. As a matter of fact, all the Hyun-wook/Yoo-kyung scenes fill me with glee (actually, I revert back to a 14 giggly girl), I fangirl Alex so all of his scenes as Kim San make me happy and I love Eun-soo cos the way he roots for HW/YK and the way he tries to protect them is adorable. It's the overall storyline and the extended cast that have me meh and uninterested. I really couldn't care less for, say, the trio of female chefs or the other chefs. Know what I mean?

On the other hand, I could watch Hyun-wook/Yoo-kyung for a long time, but how I wish there was a much more solid storyline supporting them. Whenever I watch Pasta, I see lots of wasted opportunities. That said, I still watch it even though I'm also watching other dramas. ^^

I really like Pasta.The extension is making it draggy.........16 Episode would have been so much better.

I'm keeping Pasta and agree with #3.
wish upon a star is a bit boring now (but I like KJH and Nami and Parang)
Birth of the rich is a very potential choice.

Yay, I'm so glad Pasta has good ratings. Love the chemistry between the 2 leads. Eun-soo is so cute. I dont like to watch the scenes of the 3 female chefs and some scenes of the Team Korean Chefs.

I dont want it to end at 16. And I have been eating pasta ever so often these days.But I wish there are more romantic scenes between the 2 leads.

I watched Birth of the Rich last night and I found it, to my surprise, a good watch. Though I'm not completely sold on Lee Bo Young as a rich but economic chaebol, I'm loving Ji Hyun Woo. I've actually been supporting him since his musical debut and just find him charming. I think that this role fits him to a T. Ambitious, smart, talks big but does things big. He's not a complete sob story in that he's proactive. For a first episode, I liked it. Although there were some scenes where I just had to laugh because it was so very typical, I'm interested to see what will happen. I cringed when Lee Shi Young's character swayed into the scene. I hope that her character gets fleshed out beyond the typical snooty, witch with a wardrobe of gold.

Overall, I think I'll be watching it as it comes out.

Regardless, Lee Bo Young was a pretty child:

@20: If you do internet search for LBY + surgery you get a lot of pictures. She was very pretty but surgery (surgeries) is obvious. At the least, she did nose, eyes, jaw line.
http://cafe.naver.com/goodbodysline.cafe?iframe_url=/ArticleRead.nhn%3Farticleid=2355
http://cafe.naver.com/onlygame.cafe?iframe_url=/ArticleRead.nhn%3Farticleid=21227

I guess it's a bit sad but these days, I don't really mind if someone had small surgeries done. In Korea it's become almost normal, like getting braces. I do understand when people don't like it when actresses get PS because I used to feel the same way.

i have to say this i dont understand the korean Audience at all
this drama sounds good and the cast is well known but only 11% is watching this ! whyyyyyyyy while a silly super boring daily drama called a good for the wind whatever with no stars gets 20% explain this to me

@ Ina, THANK YOU SOO MUCH!! but is there a difference between the word "kinda" and "kindayo"? i mean in the drama i was watching the character looked shocked after hearing those words. Thank you though!!

@Sandy (24),
Just to put things in a little perspective, Fine Windy Day is a daily drama, and those typically get higher ratings. That drama doesn't have huge stars but I'd say the young cast is made up of a lot of well-known up-and-comers. It also airs earlier in the evening so it's the kind of show that families watch together (or leave on the television as they go about their evening). 11% for Birth of the Rich isn't actually terrible for a first-week number, and none of its leads are that famous, either. Ji Hyun-woo has gotten praise but apparently the reaction to Lee Bo-young is decidedly lukewarm. The plot also is (according to reviews coming in after the second episode) "pretty familiar."

@ 24: I think most of Korean viewer are ajuma ( like housewives...) and they like daily/family dramas.
we- online and young viewer like something like Birth of the Rich.
I totally fall for Ji hyun woo after 2 eps.

Lee Bo-young ain't crackin'. She's making it hard for me to pick up this drama......

Honestly, in my opinion, the only reason why people aren't accepting Lee Bo Young as warm as Ji Hyun Woo is because the difference in her character. In the first two episodes, she's the exact opposite of likable with the way she acts. She's not the typical Korean drama girl character, which is why I like her so much. I'm sure giving it some time would improve the reception- I really do like the drama as a whole and I'm about to wattch episode 4 soon. I very much recommend this drama.

same here ernie...i am so fond of watching this drama...funny, entertaining and relaxing...waiting for the last 2 episodes next week and will surely miss the sweetness and teasing of the characters of ji hyun woo & lee bo young. I will also miss the role of lee si- young and nam goong-min. more power for the 4 of them!