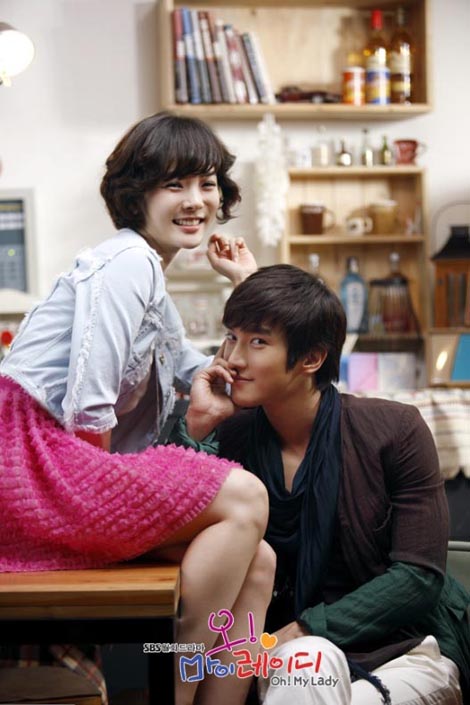 How cute are they? A bunch of stills, behind-the-scenes photos, and the preview are out for SBS’s upcoming Oh! My Lady, which is two weeks from its premiere. Chae Rim looks adorable, and Choi Siwon ain’t looking too bad himself.

In the drama, Choi Siwon plays Sung Min-woo, a hot young actor who gets saddled with ajumma manager Yoon Kae-hwa (Chae Rim). Although Min-woo is described as a “top star,” I’m thinking he’s not so much modeled after Jang Dong-gun/Lee Dong-wook/Hyun Bin, and maybe more like Song Seung-heon, because in the preview Kae-hwa mutters, “What kind of actor has such lousy acting?”

The preview doesn’t really grab my interest, and aside from the line above, I didn’t think much of it. But this drama is still on my to-watch list, because I like the fluffy premise and I think Chae Rim is talented and adorable. I also like the bit where they make Choi Siwon a famous actor who can’t act, and Kae-hwa uses that as her pitch: “What does Sung Min-woo need in order to become a serious actor?” (Aside from talent, I’m assuming the answer is Kae-hwa as a manager.)

As it takes over on Mondays and Tuesdays when Wish Upon a Star ends next week, we can expect that Oh My Lady will have a similarly mild tone (as in, not too edgy and generally feel-good) to correspond to its early-evening timeslot. Since I’m enjoying Wish Upon a Star, I’m happy if the next drama carries over the upbeat, enjoyable vibe.

The first episode airs on March 22.

And here’s the preview. Like I said, it’s nothing too exciting, but I’m hoping the actual drama is better:

Via E Daily, My Daily

looks fun
always in for a rom-com
22 mar, that is less than 2 wks from now
great!

i can't wait to watch this drama. Haha what kind of actor have such lousy acting skills? LOL

looking foward to it....
nice abs

I adore Chae Rim. Choi SiWon is hotness<3 I have no problem with fluffy dramas. Just not too fluffy.

I'm looking forward to this. I've been a Chae Rim fan since Dal Ja's Spring, and stuck through almost all of her dramas, even the latest Good Job, Good Job.

Is it a new trend over there in Korea, why are all the girls with short hair suddenly? Pal Gang, the 2 girlfriends in Still Marry Me, Lee Bo Young in the new drama...

just wondering why the used Christine Milton's version of Superstar instead of Jamelia's....

'Nothing too exciting' about the shortage of buttons in Korea??? :P

this seems my kind of rom - com Korean drama... so definitely count me in!!!!!

From what I'm hearing so far, this sounds like it has bits and pieces of Last Scandal of My Life (just the ajhumma/star bit) and Full House (with things like a female role close to the male lead...who's also in the fashion business). Looks like a fluffy one with (hopefully) just enough actual substance to make it worth watching. =]

That being said, how adorable are these pictures?? Especially the one on the stairs! They look so good together, which is always a great thing =]

But how old is CR's character again? If she's supposed to have a kid, it must be a young one.

yes, it's clear that the shortage of shirt buttons continues unabated in Korea. Perhaps they've been donated to a country where abs are not so choco.

I'm hoping for fluffy comedy myself.

Chae Rim is so NOT looking like and ajumma. she's way too cute to be ajumma material.

oh, Siwon, flashing the abs whenever he can!

I don't know Korean, so I couldn't understand the preview when I first watched it, but now I'm really intrigued. I was going to watch it for sure, for Chae Rim and Siwon, but if Siwon plays an actor who can't act, that just makes it so much more appealing! (When I watched the preview for the first time, I assumed he was acting in a cracky movie, instead of acting seriously. Dang, I misinterpreted.)

Chae Rim looks so much younger with the new hair cut. These are very cute photos of the couple. Thanks JB.

I'm in the mood for a light romcom.
Why not? :D

Oh snap, here I go again... keep my laughters fulfilled! I'm getting those Full House tingly sensations all over again.

oh i can't wait for this one...i luv choi siwon from Spring Waltz & hv been a big fan ever since....Chae Rim is like you said adorable & i like her a lot too. she looks slimmer wow what a nice denim outfit she's got.

Its look all kinds of cute....If Choi Siwon acting is bad, he can just take his shirt off and it will be fine. Cos he's is extremely handsome boy, with some serious pecks -ooohhh la la!

btw, the preview has been subtitled in English here: http://www.youtube.com/watch?v=DHNGsUbcfrk

Yikes, this may be the 3rd drama I'm truly anticipating for March along with Personal Taste and Cinderella's Sister. Siwon is looking totally HOT and a bit dorky in the previews. Haha a famous actor who can't act ... so he's all dependent on his looks then, which I can see why. Aaahh falls over.

Ok, I'm in. Haha, OMG I think I'll watch like 4-5 dramas as they air this time around. Again. I thought the first batch of 2010 dramas was the first and last one with me hooked like this: apparently, not. Head, meet desk.

yay! a fluffy drama to contrast what seems to be a melo-filled Cinderella's Sister....

rawr at the shirtless pic. and lol @ momosan.

Is this the new rave in Korean entertainment? Cougars? If it is, I sure am loving it! Definitely looking forward to this drama and Personal Taste....

Looking forward to both Personal Taste and Oh! My Lady. With exam season around the corner, I could do with something lighthearted.

Lovely coupleeee <3 two of my faves.

Oh My Gosh!!!! that looks adorable! Im getting a "Full House" vibe from the preview. Can't wait. >.<

I love Chae Rim! And CSW and CR seems to mesh up really well! They look great! :D

I feel like I will LOL on the parts where we get to see Min-Woo's terrible acting. Ugh! If this and personal taste end up catching my attention then i forsee myself not doing much on the nights they come on.

btw Song Seung Hun isnt THAT bad, is he? I'm sure there are people who agrees with me...

It's funny how older woman x younger man is so adorable, but if it's opposite, it'd be like: he's old enough to be her father! lol That's just frickin' sad.

I am so watching this one.

I like both Chae Rim and Siwon, He was very sweet on 18 vs 29. (Was he on Spring Waltz? Idon't remember what role he played in it)

he does look like a hotter version of Kangta, but why the ew? Kangta was the face of H.O.T

"I’m thinking he’s not so much modeled after Jang Dong-gun/Lee Dong-wook/Hyun Bin, and maybe more like Song Seung-heon, because in the preview Kae-hwa mutters, “What kind of actor has such lousy acting?”"

i refuse to believe tht chae rim is an ahjumma she is waaay waaaay tooo adorable! but si won is HOOOOOOOOOT!!!!! *droools*

Well, Chae Rim is only 32 years old this March. Not really an ahjumma especially in those stills. And I love her reaction!!! She's just too cute!

She'll portray an ahjumma role again, but really, compared to other actresses her age, she really looks so much younger!!! I guess she just likes playing one or she got fed up playing a high schooler when she was still really young (like in Dating Now with SJS, I'm Still Loving You).

i kinda like what the preview showed but i'm wishing it will not be a copycat of Fullhouse and Last Scandal. though I love and like the two show, I wish Oh My Lady will stand on its own just like Oh Dalja with MNIKSS and the woman who still want to marry. though i'm quite bothered with Chae Rim short hair

What's this new trend in KDramas nowadays...featuring mostly "cougar-love'??? Others may not like this premise, but after watching TWWSWTM...I'd say, if treated well & the story holds out romantically...why not? I'm soooo loving TWWSWTM !!! The "chemistry" between PJH & KB is so convincing & I love watching ONLY their sequences!!! I abhor the scenes of Ban Suk & Da Jung, that I fast forward them everytime!!! But Buki is the story's wisdom behind all the chaos!!!

I'm absolutely loving the stills and BTS of this drama. Its definitely on my list of dramas to watch out for so I'm excited although I do agree the preview does look a little lacking but it still made me smile (don't know if that makes sense LOL).