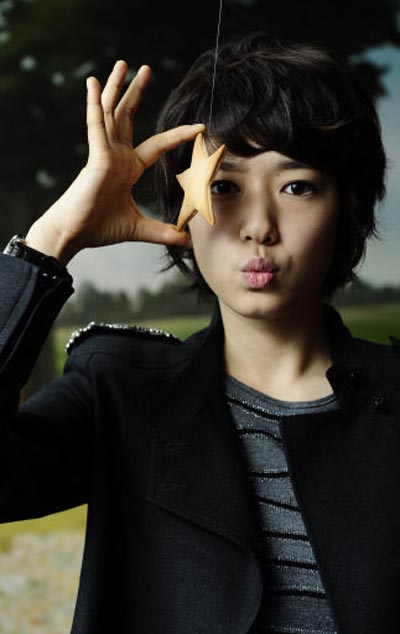 Park Shin-hye has been added to the cast of the upcoming Cyrano de Bergerac-inspired movie, which has been updated for modern times and titled Cyrano Agency. The original story dealt with Cyrano, a witty but self-conscious man, who wins over the heart of his beloved with romantic letters — but on behalf of another, more handsome, suitor. In this version, lead actor Uhm Tae-woong is the owner of the Cyrano Agency (a sort of dating agency), and Park Shin-hye works along with him as a “love messenger.”

The romantic comedy also stars Smile‘s Lee Min-jung as the object of Uhm Tae-woong’s affections, with the love triangle rounded out by High Kick Through the Roof‘s Daniel Choi. (Cute cast.)

Cyrano Agency will begin shooting on April 19 and is planning for a September release for the Chuseok holiday.

good to know that PSH has a cupid role - she can pull off that cutesy image, and yet can probably be charmingly mischievous

aww - uhm tae woong isn't that ugly though... but i guess with daniel choi as his rival he is..?

I love PSH! I wish her new project is a romantic comedy like YB. Why not pair her with Lee Min Ho?

I was already on board when I heard about Lee Min Jung... Park Shin Hye is just the icing on what looks to be a sugary cake!

Uhm Tae-woong is HOT. I'm going to assume for now that they ugly him up, maybe with a prosthetic nose a la Depardieu and Roxanne?

most definitely a VERY cute cast.
However, who is the OTP? PSH & UTW or LMJ & UTW or neither?
most of the time you can tell, but I'm stumped with this one

I thought PSH was a more established actress than Lee Min Jung?

Hmm, maybe not, but I always got that impression, which is why I'm surprised that she's not playing the lead role.

BUT if I think about it, she is much younger than LMJ, even though LMJ looks like she's only 22.

It'll be nice to see Uhm Tae Woong in a comedy since I've only seen him in more serious roles like Queen Seon Duk.
Off topic a little but is it just me or does he have a bit of a lisp?

This hardly happens, but I literally like everyone on the cast, particularly Uhm and Park. <333333

I'll definitely be keeping my eye out for this one's release.
Park Shin-hye and Lee Min-jung became my favorite drama actresses, thanks in no small part to You're Beautiful and Smile, You.

I only wish that Cyrano Agency could be a 20 episode romcom drama series, and not just a movie...then we could enjoy it over a couple of months instead of one sitting.

I am so excited for Shin Hye's new project!!!
From the sound of things, the movie will be a romantic comedy? I really hate the original ending to Cyrano (so sad!) so I hope the modern update will have a cheery and uplifting ending.

Haha, I get the feeling that UTW has a lisp too. :P

Definitely going to watch this, such a cute cast - watched YAB and Smile religiously, god it's going to be hard to decide which heroine I'm going to root for...

Btw, don't know why, but don't find UTW good-looking: if I look at it from an abstract point of view he seems okay, but I guess Delightful Girl Choon-Hyang set my views on him - even after Queen Seon Duk I don't find him all that attractive... Sorry javabeans ^^

I kind of love that a JGS banner came up when I came on this post :)

I agree with JB, Uhm Tae-woong is HOT and a really talented actor (though imo, his last work QSD didn't give him much room to work with as Yushin). I'm also intrigued on who's going to be the OTP...but either way definitely plan on watching this when it comes out.

@blokkoms
For me UTW's attractiveness isn't based on his physical appearance at all. When he acts, he just has this commanding onscreen presence and you can't help but feel pulled towards him. So for me...I guess I'm saying UTW is extremely talented and charismatic onscreen and I find that very attractive.

"Off topic a little but is it just me or does he have a bit of a lisp?"

Short tongue, though not as short as Kwon Sang Woo. But when he does comedy, he can get sloshy. :)

Oooh, this is good. I'm super excited now, indeed a very cute cast. I can see PSH as a cupid so it will be interesting to see how this movie turns out.

I'm excited for this too! 8D

quite a cute ensemble. looking forward to Park Shin Hye's role. She is a beautiful person and has a wide range in acting. LMJ, DC and UTW are good actors too. great casts overall, bit disappointed that PSH is not the leading lady.

Interesting and looking forward to the Cyrano Agency movie.

glad she's back!! ^^
all four are recent hit drama actors and actresses..

She's back with a new project^^ ( even though she's not the main lead)
I have heard she will focus in school this year so she will just do some small projects here and there. And I am glad that she decided to take a part of the movie;)

Plus, SH and actors Song Joong-ki are appointed as the publicity ambassadors of the 11th Jeonju International Film Festival which will be held during April 29 2010 - May 7 2010. She 's sure busy lately but I hope she is talking care of her health and school as well
I thought that she didnt get much recognition as she deserved for her role in Yb( as much as LMJ in SY). Again, she's till young but it seems like she has worked in the industry for so long...( it's funny that I am watching Kimcheed Radish Cubes, which SH was the main lead when she was 17 and LMJ was one of the supporting casts)
I wasn't sure about this movie , but I am sure watching it now , just for SH ( ... how I wish she is the main lead, and don't get me wrong LMJ is still lovely as always )
Thanks JB to update more news about her :)

when i read the news i thought PSH would be a 'cupid' à la tinkerbell/fairy godmother for UTW and LMJ? I mean, that would be cute, whimsy, and a really interesting role I would love to see PSH in. However, 'love messeger' in a dating agency doesn't exactly resonate with my thoughts..

Since Uhm Tae-Woong's looks is one of the topics... I think he's a good-looking guy. He has an honest and honorable look about him, very much like his Yushin character in QSD.

I don't think he is the best looking actor but he is charismatic and he can act so that makes him super hot.

(Belleza I find it curious that you are resurfacing just when Samsooki did. My theory is you are Latoya to Samsooki's Micheal)

@ 7 and 17: LMJ is ok, she's a charming lady!
I don't say that PSH is not charming, I just want to point that her cuteness is more impressive than her lady-like.
About acting skills, I've watch Kichee cube (where they both work in), YB, Smile you... I don't think PSH is that much better than LMJ, and being an established actor doesn't mean always taking lead, I think Kim So-yeon takes her role in Prosecutor Princess when she is quite old.

three of my fave actors/actresses casted!!
looks like another movie to add on my ever growing list....

Cute picture!
Honestly, I'm probably the only person who couldn't stand her in YB. She tried so hard to look adorable and clueless; it got on my nerves eventually.
But, all has been forgiven! I still like Park Shin Hye as an actress and somehow this cupid role sounds PERFECT for her.
Three perfect casting choices. Now I'm excited!
Oh, and Uhm Tae Woong IS sexy IMO. He didn't look good in QSD, though. I think it was the hair.

LOOOOVEEE PSH and LMJ. <3
Somehow I always think that IRL PSH will end up with much older guy. :p

I think PSH will end up with Daniel Choi^^
Don't they make a cute couple? :)

LMJ ROCKS!!! the prettiest actress and she can act, she is a natural actress, glad she got the lead role......she is really outstanding with all her roles......with lots of expressions cute, sexy, pretty, etc with her big puppy eyee

I luv luv luv park shin hye..she will play cupid?well she will be a cute cupid
i imagining her like julia robert as tinkerbell in peterpan?not main role but important..i'm so exciting...>o<

then who is Janet? that is the million dollar question on my mind. ;-)

hopefully the movie is good too!!

Cant wait to see how they will portray UTW with the big nose thingy.. And of course my lovely Lee MIn Jung... Although im a bit reluctant to see her with another man than JKH, but daniel choi is fine so, we'll see... HEHE..

And the cupid part must be funny to watch...

Hahaha, she will act like a "cupid" role this movie with Lee Min Jung and Uhm Tae Woong?! Oh gosh, it seem VERY interesting to me, oh yea! (beams)

Oh my, it made me miss to watch that 2009 drama "You're Beautiful" with Jang Geun Seok & Park Shin Young, gosh.......(shook my head slowly) Unbelievable!

I was in with Lee Min-jung already though :)

Shin Hye FIGHTING!!!!!
Even she don't play the main roles, but she plays a very interesting and important roles too - as a cupid!!! It's more challenging. But i believe she will carry the roles perfectly.. Go.. Go.. Go.. Shin Hye. Can't wait until September..

I hope the movie doesn't end like the book does, cause then I'll be sad :( But hopefully it'll be funny if UTW acts like Cyrano did in multiple occasions :D

looks like a fun cast, will definitely check this out

like some of you, im wondering why park shin hye is taking a supporting role. after YAB, i think she is well past such roles. i dont find Uhm Tae Woong handsome too. maybe because he played the sort of bad guy in My Delightful Girl Chun Hyang. he did played the hero in Queen Seon Deok... but come on people, rivaling Bidam (Kim Nam Gil)... dont we all only have eyes and sighs only for Bidam / Kim Nam Gil...

staying off the point for a while, anybody knows who is that guy who played the Gaya Prince in Queen Seon Deok, that guy who became a loyal friend of Yoo Shin??? I think he is hot and can hold his own opposite Kim Nam Gil.

Just hope that this will be really modern version without the sad ending of the original plot.