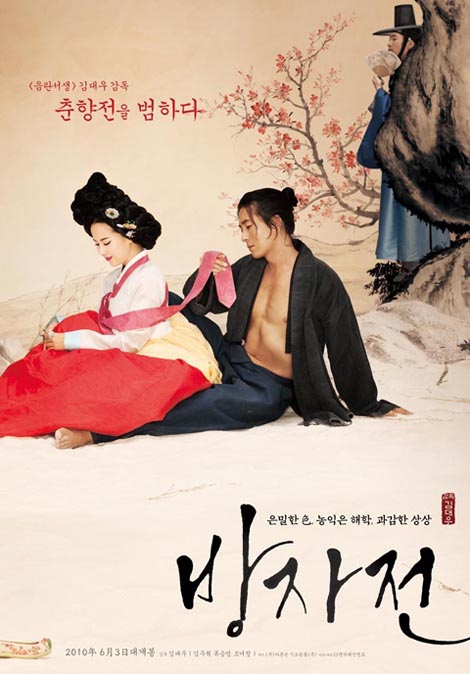 The poster and trailer (watch below) are out for the upcoming Bang-ja Chronicles [방자전], which releases in June. The movie plays with the famous tale of Chun-hyang, which is a story of young lovers in the Joseon era, and stars Kim Joo-hyuk and Ryu Seung-beom.

The film comes from a writer-director who’s familiar with risque material; Kim Dae-woo wrote the script to the 2003 film Untold Scandal, which was an adaptation of Les Liaisons Dangereuses starring Lee Mi-sook, and wrote and directed the 2006 movie Forbidden Quest. Following those racy sageuks, Bang-ja Chronicles has also earned a rating of 19+ for its sexual content.

There have been numerous film adaptations of the original story, notably Im Kwon-taek’s Chunhyang in 2000, while a couple of dramas have twisted the story more comically; drama Delightful Girl Chun-hyang modernized the story and set it in present-day Korea, and Story of Hyang Dan switched around the lovers. (Chun-hyang and Mong-ryong are the fated lovers, but Hyang Dan played with the idea of Mong-ryong falling for Chun-hyang’s maid instead.)

The movie releases on June 3.

Oh, I'd love to understand what they're saying. Since I already know this movie probably won't come to Brazil, i'll have to wait for the subs...

ooh i love these Josean eros..! i just have to wait for the dvd!

Well, if the servant is better looking than the master, I would go for the servant too.
keke.

Love the costumes. Looks like a really good movie. Hopefully somebody will sub it.

The likes of Frozen Flower and Potrait of a Beauty?
Those are the only racy saegeuks I've watched.

This looks good. I'm excited about this since I really liked Untold Scandal. Too bad there won't be a character as conniving as Lee Mi Sook.

...but that's nothing compared to her Jang Hui-bin of the 60's (I think; the series title was "Yeoin Yeoljeon", and 2 of the episodes were "Hwang Jin-i" & "Seogung Mama" (about Queen Inmok of the Gwanghaegun:-:Kim Gae-shi:-:Inmok story triad))

I don't find Kim Ju-hyuk attractive at all.. but I'll probably give it a try since I really liked Forbidden Quest and I like Ryu Seung-bum.

Wow, will anyone be subbing this movie? I know I had a hard time finding Untold Scandal subbed.

The poster is like Frozen Flower and Portrait of a Beauty where there's a lot of unneccesary sex scenes. That was enough for me, no more please.

I'm always surprise at how some people can't take too much in the sex scene department... Lay it on me! The more the merrier...unless...the objects of desire are undesireable...lol...