Lee Jun-ik and Cha Seung-won, the director and star of historical action-film Like the Moon Escaping From Clouds, pose playfully for an Elle magazine spread in promotion for the upcoming release. The fashion shoot will be in the magazine’s May issue, while the film opens at the end of April.

The movie has been attracting buzz for its splendid visuals (watch previews here), Lee Jun-ik’s directorial flair, and the performances of its leads, Cha Seung-won and Hwang Jung-min. The title has been the source of some commentary in recent weeks, as it is written in deliberately misspelled hangul (the letters spell out the words phonetically, rather than in its correct forms). The writer of the source material has defended the choice as being true to the times; in the Joseon era (which is when the film takes place) before the widespread proliferation of hangul, words were often written as they sounded.

In any case, Like the Moon Escaping from Clouds releases in theaters on April 28. 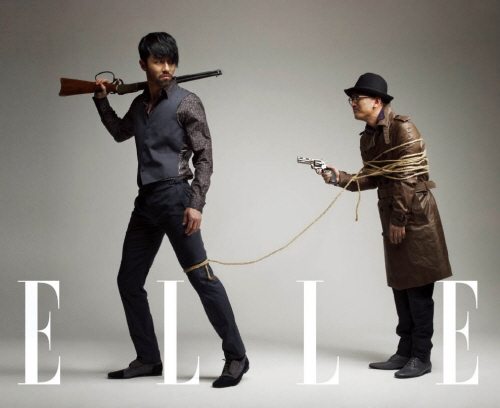 kinda reminds me of sherlock holmes and dr. watson.

As expected CSW looks great in this promotional photo. I await with much expectation this movie. He is my number one favorite!

LOL, I love the last picture! It's so hilarious!

@JB: btw, the top picture is no longer available :)

CSW is channeling some JWS ala The Good/Bad/Weird. :D

The 2nd pic is soo funny, love it.

CSW we miss you, come back to the screen ASAP :)

haha yeahh I thought the same!

The Clark Gable/Cary Grant of Korea. I love the gray pinstripe suit.

Awesome fashion spread. Love how the director has an active role in the spread too!

CSW looks so good in a suit. I freak out when he's in casual clothes or period clothing. He should just be in a suit all the time. ;)

i LOOOOOVE the second photo. i wouldn't normally like that haircut, but CSW really rocks it!

Wahh!
I can't wait to see YOU in Athena, all antagonisty and badass, Cha Seung-won! xD

HAHAHA Those photos are so cute. Lee Jun-ik is so petite, or Cha Seung-won is just mega tall. I think it should be a fun watch... esp since the director + actor gets along this well

What more can I say about Cha Seung Won? He is great in any photo shoot, great in a suit and any pose he makes makes him so damn sexy! Younger actors have so much to learn from him!

Oh, to be Cha Seung-won's tailor (and get to check that inseam, ahem)!

CSW was hilarious when he appeared on Family Outing - he totally had that confident, but laid back vibe going (much like Kim Sung soo), even when he had no idea what he was doing cooking.

But really, he's got to stop overshaping his eyebrows; it makes him look a bit freaky.

I look at the pictures and suddenly imagine CSW to play the male lead in STYLE, he does look EDGE!

Can't help but laughing out loud at the second pick. It reminded me more of Poirot and his sidekick Hastings =D

CSW looks so damn fine in suits! He looks fine in anything he wears actually! And not wearing anything either! *drool*

His model background really comes out in photoshoots. Both he and KSA always, always deliver spectacularly riveting photos.

Love the homage to JWS in TGTBTW (not that it was intended), and let the real men come out to play in Athena!~