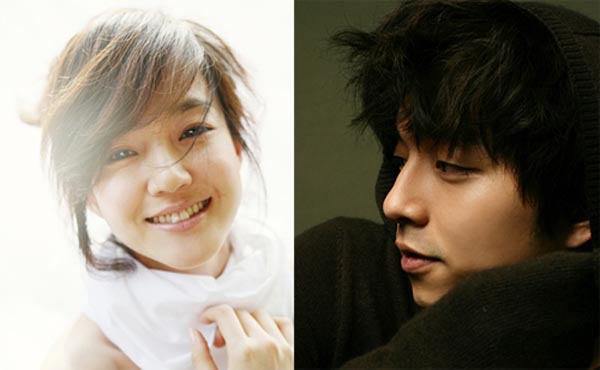 Gong Yoo was just released from military service last December, and has been enjoying a short break while looking for the follow-up to his last acting role, which was in 2007’s smash drama Coffee Prince. Now he’s announced his casting for the film Finding Kim Jong-wook, which is based on a stage musical. His co-star is his friend Im Soo-jung, with whom you may recall he was once caught up in dating rumors.

In the movie, Im Soo-jung plays a woman named Seo Ji-woo who had met her first love on a trip to India. She embarks on a search to find him, the titular Kim Jong-wook, starting off a comic series of events. In the process of looking for her first love, she falls in love instead with the man helping her on the search (Gong Yoo).

As he left the public eye at the height of his fame, Gong Yoo has been flooded with offers for dramas and films — more than 30 in total — since his return to civilian life. The musical premiered in 2006 and was a popular production, running nearly 1,200 performances.

This sounds like a lovely film. And having Yoo back on screen is more than an added bonus.

i was almost afraid he was going to be the titular kim jong wook - but thank god he isn't!

Yaaay! I cannot wait to see Gong Yoo back on screen!

I heartily second and third and umteenthmillionth all the yaaaaaaays! Now all I need to have a total breakdown is for GY to get back with YEH for another drama. THAT would be awesome.

next, I hope he picks a drama so I get to see MORE of him~! Heheheh...

Ooh, great news! They've never been in the same project, have they? This will reignite the dating rumors. :)

the plot have some similar elements with the Bollywood movie Jab we Met and it's one of my favorite movies, so I'm really excited to hear this news! and with Gong Yoo with it what else could I ask for?!!!

This sounds very similar to Robert Downey Jr. film, "Only You."

Gong Yoo will be lovely for the role~ I look forward to it.

Hahaha... both are my fav actors! can't wait!

YAY!...there is something seriously up with my luck this week...like a few days ago i was thinking about jangeun suk and the rumors about him in the kim wa petto remake, which was here like ages ago, and then i come here a few mins later and the first thing i see is that he has been confirmed...and then today i was looking through some coffee prince songs and thinking about gong yoo and wondering why it was taking him sooo long to find a project..and then I come back here again..and THIS!!..im sooooo excited!!

they make a believable couple..can't wait to see their chemistry on screen!!..so happy gong yoo is back!

Does this mean that there is a minute possibility of Gong-yoo coming to India?:-D

Actually though jealous this is one couple that I do wanna ship it to be real... so I really don't mind the relationship become real!

Yay! i just hope we get that movie with eng sub! will def watch it :) btw, i must say your website is one of my fave now.i enjoy reading all of it! GOOD JOB! keep it up.

Yessssssssssssssssssssssss you just made my night. I absolutely adore Gong Yoo and Im Soo Jung is awesome as well, so this movie is going to be amazing. Thanks for the great news, javabeans! Now all I'm waiting for is Gong Yoo to decide on a drama, and I'll be set. :D

nice! the plot reminds me of the movie "Only You" with Robert Downey Jr and Marisa Tomei...Well glad to see Gong Yoo is back!

Yes it does sound a lot like Jab We Met, which was a pretty sweet film and one of my favourite Bwood films. If there is the slightest, thinnest possibility that Gong Yoo is coming to India, I shall cancel all my plans for canceling my trip to India and be there, hang the cost!

This sounds like such a sweet and fun film. I'll definitely be checking it out. :)

My Soulmate, Gong YOOOOOOOOOO!!!! So excited. I only wish it was a drama instead of a movie so that I could swoon over the love of my life for two wonderful months. I've actually never watched a Kmovie but this will be my official first!!!

JAB we met??.. i think jaw we met more talking about depressing lead role, are they looking for something??.. i think it's different. but i like this indian movie.
surprising me many people who like k drama& film like indian movie too.
this film is one of my fave Indian movie.

anyway. i am so glad with his comeback project. hehehe.. can't wait for him

The plot somehow reminds me of the movie "Only You" starring Marissa Tomei and Robert Downey Jr.

Hold on a second!

The summary sounds SOO familiar. It seems like two movies put together that recently released to theatres (not sure if they're still in the theatres now though).

I missed her cheerful posts and all the other 'regulars' ie @ockoala, hjkomo, mookie, samsooki... to name a few. Have they all moved to another 'playground'? :-)

Oh yes.
This is great news!
The film sounds fantastic and of course angsty.

Ooh I love both these actors! And yay for Gong Yoo! YAY!

@35 simplesim
:) The regulars are still around( for example, @Samsooki recapped Chuno 15, and the 'others" commented too). I think we all are just busy....thanks for "missing" us ,though :)

The storyline kind of reminds me of Leap Year. . . .

love the casts especially gong yoo!looks like it's a romantic comedy...wew love it!

joining in on the general yaying!
any ideas on when it will be released?

Yayy... Can't wait for it to be released

Srsly kyaaa'd in real life because of this. I CANNOT WAIT!!! GONG YOO! *fans self*

GY has the guy next door feel to him. Somehow this moment is best suitable for Taylor Swift's "Girl Next Door" MV starring GY as male lead.

I'm antsy to see his lovable smile all over again. I miss him so much after Coffee Prince.

It'll be interesting seeing these two actors sharing screen space. I really liked her in Happiness and MiSa. She has the whole meek-and-docile-yet-still-likable thing nailed. I find her acting style similar to Gong Hyo Jin. Similar, not identical.
Gong Yoo is just yum. 'Nuff said.