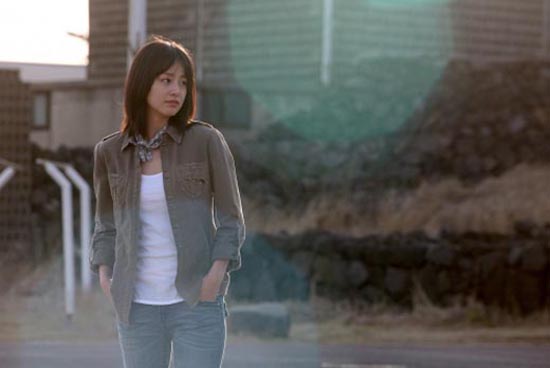 Filming began on April 2 for Lee Jun-ki and Kim Tae-hee‘s film Grand Prix, and here are the first stills. In the movie, the two are horse-racing jockeys who fall in love. Kim’s character Joo-hee suffers a major blow in confidence after she has an accident, and travels to Jeju Island to try to get over it.

Lee plays the character Woo-seok, who was once a promising jockey who lost his friend in an accident. He finds that he has a lot in common with Joo-hee, and helps her make a comeback.

Grand Prix is directed by Yang Yun-ho of Holiday and Fighter in the Wind, two films that emphasized tough men. He was also one of the directors on IRIS, and said of re-teaming with that drama’s star, “Kim Tae-hee has a sincere, honest personality. You’ll be able to see a new side to her as an actor in this movie.” The film is aiming for a release later this year.

nice chemistry from the stills; they look surprisingly harmonious

Just finished rewatching woof-woof last night and now I get a treat of seeing pics from Grand Prix! I'm meh about the story but with good chemistry and direction, it would still be quite good. Jun-ki fighting!

..is it just me or does Lee Junki look old?

@Bloop
kind of
he looks super tired
but im excited

I didn't really have any comments about this movie, but just had to say that KTH looks great in that first photograph.

If KTH and LJK have good chemistry, this movie could be a real pleasure to watch.

hmm.. LJK & KTH.. good pairing.
i know i dont need to mention this.. but KTH is very beautiful. sometimes, watching her alone without knowing the storyline is enough..

I'll be watching this just to see who's going to look prettier. And if the story is decent, I might even finish it.

i'm eager to see the connection of these 2 onscreen. thanks...

@7 I respect your opinion and I agree she is beautiful but to me if an actress can't do her job even remotely well I can't watch. It's like Jessica Alba in honey, sure she's beautiful but appearance doesn't make me wanna watch if she can't act in a movie.

Nothing interesting about the storyline, the draw is only the cast

@3 Bloop Considering that he's supposed to be depressed in these scenes, he HAS to look pale and tired. It won't do to have him all styled and glammed up :D Lee Jun Ki's got a pretty fine body *whistles*

@10
no problem. i do feel the same way abt that. but the exception goes to KTH and HGI. maybe its not just their beauty that blurred me but their personality too.

@ PBnBanana: do not have any bias, do not judge to soon, wait after seeing the movie to put comment about acting.
I like KTH's acting in "Love Story in Harvard" and "Iris" and "Forbidden love". Her acting progresses. To me, her acting surpasses other many actresses. Of-course, she still needs LBH's tutor of acting, ha..ha...ha....
She is really pretty.

good pairing & good matching. at last, can watch them in the same movie. both also very beautiful. looking forward for this movie. goodie