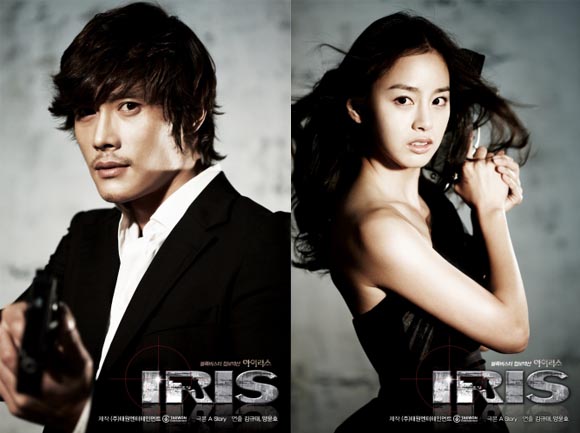 Although Athena: Goddess of War has been called IRIS 2, producers have specified that Athena is merely an IRIS spinoff, not a sequel. In actuality, another series bearing the title IRIS 2 is being produced as a separate drama and will be a true sequel. All three series — IRIS, IRIS 2, Athena — are produced by Taewon Entertainment. Yeah, this won’t get confusing.

Therefore, producers have begun pre-production work on the sequel and are currently in talks to bring back its stars Kim Tae-hee and Lee Byung-heon, as the new story will be set three years after the end of the original. IRIS 2 is aiming for a broadcast date of October 2011, so we’ll be seeing spinoff Athena first, which is aiming for a premiere later this year.

If you’re keen to avoid spoilers about IRIS, skip the rest of this paragraph. As previously noted, Lee Byung-heon will not be starring in the sequel series, so if he makes a reappearance, it’ll likely be a cameo, most likely in flashbacks. This isn’t surprising, given that his character was killed off in the last episode. The second season will deal with Hyun-joon’s death as well as the story of Baek San, who was arrested for his involvement with the IRIS organization, and the identity of the mysterious Mr. Black.

IRIS 2 plans to beginning shooting next March and is negotiating with all of the main cast; in addition to the two abovementioned leads, that includes Kim Seung-woo and Kim So-yeon. They are also considering adding new top stars.

Via My Daily, Newsen

Wow...little old me actually read this before the experts- @ockoala,@langdon813,@hjkomo...hehe...and I have YET to finish IRIS.
Joking aside, I hope IRIS2 will be better...how about WITHOUT KTH( one of the reason why I'm dreading to finish the drama...

I think I would only watch this to see Kim So-yeon rock as Sun-hwa again. Otherwise...without LBH, honestly, not that interested.

As long as they don't make all the deaths of season one "accidetal" or like it wa all a dream to bring them back. I'm cool. Iris was amazing because of Kim So Yeon and Kim Seung Woo so i'll probaby tune in for the first episode. Although i wish they would change the scriptwriter. He or she was just so bad....... Sighs. Romance with action just does not work out. Most of the time Kim Tae Hee was just plain stupid and annoying.

no LBH...but keeping KTH? personally it should be the other way around. Not that she was terrible, but he was much much better and also a more interesting character to keep
at this point more excited for Athena

Yeah, how about bringing LBH back and cast a new actress? LBH is one of my favorite actors but I have yet finished Iris (shocking for me!). Plus, as much as LBH tried to carry the drama, I don't think KTH has that much chemistry with him.

Please substitute YEH for KTH it will be more action and KSY and SSH I will watch for sure!!!

bring back KSY only if she plays a MAJOR role in the story.
yeah, I'm still bitter from last year's DRRAAAAMA.

wait a sec... will this be the first k-drama sequal to have the original cast back?

Not even LBH and KSY could save this mess for me the first time around and now they want to do it again and this time without LBH. Its like half the charisma without the novelty. Of course its bound to be a hit..NOT.

@5: Same here! I even joined the Facebook group petitioning for it!

I honestly think IRIS is too overrated. It was an exciting watch and although a sequel sounds tolerable a spin-off is too.. ambitious.

oh there is sequel? I keep procrastinate to watch IRIS...and this is coming from a person who were so excited to see LBH, JJH, KSW and TOP in a drama. :/

i want want to watch Kim So-yeon....thats it

huh - i thought LBH didn't want to do the sequel because it would conflict with his filming g.i. joe. so he just doesn't want to do the sequel, period? guess he realized how sketchy the writing was... that's a nice way of dissing the writers without going on press conferences or online to discuss how one is so disappointed or confused about the characters (cough*witch amusement*cough*my fair lady*)

they should make IRIS 2 centered solely on kim so yeon and kim seung woo. they'll get higher ratings (in my dreams). OR they should give the two Kims cameos in ATHENA and make that drama even more outstanding.

Well, they are certainly milking IRIS for all it's worth. >.< haha

I'm conflicted! A spin-off and a sequel....I'm curious and worried. IRIS was an exciting (and nail-biting) ride for me and I loved every minute of it, even the times where the drama slapped my heart around. Sigh. One of reasons I love dramas so much is that they are self-contained stories and for the most part don't need additional installments. So, we circle back: conflicted. Does anyone else get sequel anxiety?

wow....i read this somewhere an.d i thought they were pulling my leg (partially cus I was unsure about the legitimacy of their news anyways)..so is this the first time we are getting a real sequel with sime or most of the original cast in kdramaland...looks like 2010 is a year about novelty in kdramas

I just wanna see how our prosecutor princess will return to leathers and guns after all the furs and heels! :) :)

i really love iris because of lee byung hun and kim so yeon....
kim seung woo also..lol..
cant wait the iris 2..
i hope kim sun hwa character will develop more and the relationship between her and hyun jun will be more interesting to see..for example become a lover...i really love that...PLEASE.....and kiss scene too...
i see iris last year because of kim sun hwa and hyun jun only...
kim so yeon..love her much..

Are you sure LBH won't be back? Weren't there some reports that he didn't actually get killed and will also be back for a sequel? Or was that whishfull thinking on my part ^^

2nd Estel! KSY was a major highlight.
Actually, so was T.O.P, stiff or not, he was as badass as they get.
I ended up dropping the drama at a point and struggled with the earlier episodes, as KTH was irksome.

Would love to see KSY play Sun-hwa again in IRIS 2, but right now Athena seems way better - Jung Woo Sung - OMG! I still get butterflies (and simultaneously an achy heart) when I think of him in the breathtaking, stunning beauty of a film that was Daisy. What an amazing actor.
The icing on the cake will be seeing him face-off with CSW as his anti. Hells yeahs! Bring it on!

They shouldn't make a sequel...
There are some things that should be let as they are.
It's like Disney movies, what's the point of making sequels?

@ maria ,hmh... many questions still unanswered it would be fine if they finally show Mr. Black.

How to be back when the main character was "killed".
The same with Chuno too!.

@24
I didn't see a hole in his head so bringing him back is still possible.

@20, @24,
Well the producers say explicitly that the sequel will deal with the aftermath of Hyun-joon's death, so I'm pretty sure that he's not going to be alive after all.

Chuno sequel actually sounds plausible, because it's a prequel. IRIS 2 is not, however.

Bleh. Kim Tae-hee was, I thought, the weakest link in IRIS, so a sequel focusing on her would not appeal. I kept thinking, why couldn't she be the one shot in the head? She was already so wooden, it would barely make a difference.

At this point the spinoff sounds much better than the sequel. Although KTHshe wasn't awful in Iris, I wouldn't want to watch her play that character again. Plus, LBH (and KSY) were the best parts of Iris, with one dead, really what's the point?

On a side note, I was hoping to avoid Chuno spoilers.... :( but at least the ending wasn't totally tragic

LBH's death could be a faked death. Anything can happen, but what really matters here is how much money LBH wants to reprise his role. Tun, baby, tun.

I only watched Iris out of curiousity why it is so popular back then and was only able to finished it coz of LBH and even with him in it am always finding myself falling asleep to some of its parts and thats from me who loves action movies in all its form.......if only I haven't first seen 24 maybe I would feel excited for Iris as am sure some of its parts I've already watched from 24.....now for a sequel....hmm....if it becomes popular again in Korea, will probably watched it again out of curiousity only but am sure it will be a painful experience as no LBH to keep me from falling asleep....

Oh man IRIS 2? I enjoyed IRIS 1 so much, despite the sudden, wtf ending. Grrr...

I want to see LBH back for IRIS 2... Hmm. Anything's possible.

Usually sequels drag out a show and aren't up to par as the first. I hope the producers can keep it interesting.

well in the world of IRIS where ppl get shot in the back but have bullet holes in the front, and assault guns firing right next to someones ears w/o them flinching im sure they can write it off as LBH surviving narrowly.

i didnt mind KTH, especially when she was running with those nice hip forming pants. the only person the irked me was T.O.P... who was a moving statue with masquera?

Sure wish that Lee Byung-heon will return despite many reports saying that he won't. Come on... GI Joe 2 or IRIS 2? Surely the latter?

If the character is recasted, surely the chemistry btw him and Kim Tae Hee would be lost. I wonder why the producers want to to risk that? I hope the sequel won't be as bad as nearly every other sequel is.

If the character is killed off, then worst. How will the original IRIS audience acclimatise to the new main lead then? =( not good.

Kim Tae Hee's character definitely has to stay, cos she holds such an important plot point in the story. I wonder if she's blood-related to IRIS?

Like Kim Tae Hee too, she must be in Iris #2

Iris 2 wont work without LBH, not interested. I really hope he is back. It didnt seem like he was killed in the end. And the Iris movie just made everything 100000X more confusing. So dont watch it. Also it seemed as if Sun hwa is in Athena as well. So im not too sure how that works. Just really confusing. But iris 2 is def a no go for me if LBH is not back

Hey, i watched athena first, not realizing i probably should have watched iris first, admittedly, the dynamic between the two leads in athena was so much more believable, thanks to the talented Jung Woo-sung and especially Soo Ae, i gotta say though, in IRIS, to me the stand out role was by far Kim So-yeon, i mean wow, she was only, I'm guessing supposed to be a secondary character, a fill in, but she really outdid herself, i hope to see her in the sequel, and with all due respect, if they cast Kim Tae Hee as the female lead, ima give it a miss, why would you cast a girl and not a woman for the female lead. And is there any news on a sequel to athena :D, or a combination of both series, idk, that'd be interesting at least.
P.S. More fighting scenes would be good :p