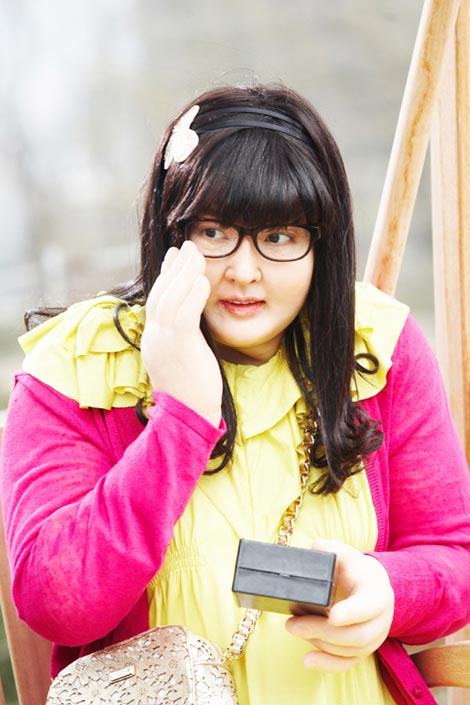 If this photo didn’t come with a caption, I wouldn’t be able to recognize the star — namely, Kim So-yeon of SBS’s Prosecutor Princess. (Even knowing who it is, it’s still difficult to see her in the images.)

Kim’s drama character Ma Hye-ri is currently slender and fashionable, but she wasn’t always so — at one point she weighed 90 kg (nearly 200 lbs). This was back when she was still a student, and also explains why her mother makes it a habit to weigh her even now.

The scenes featuring the formerly overweight Hye-ri were filmed on April 11 at the Dongkuk University campus and required special makeup and padding, made of Gore-Tex fabric and urethane foam, as well as silicone to fill out the face. These scenes will air in this week’s episodes, which broadcast on the 14th and 15th.

i can't get pass how they made her hand look LOL

Unbelievable!!!!
Can't recognize KSY at ALL!! Except for the eyes, I think, hehe!

Thanks to the recaps on DB, I'm following this drama now and it is HILARIOUS!!
Am going to spread the love of PP!!! HR/IW fighting!!

Out of all the new Wednesday/Thursday night dramas, Prosecutor Princess is surprisingly my favourite one so far! it has been more unpredictable than any other kdrama i've ever watched lol.

I dont think people give this drama enough credit, it is so awesome! :) can't wait till the next episode!!

Costume and makeup surely creat wonder! I fell in love with this drama just this past weekend. I have been watching CS and PT but then I got caught up in the PP maddness. I much prefer PP over PT anyday. KSY plays this role so well that it makes it hard not to like her even if she plays a "dumb ditzy blond." Book smart but not so much anything else. lols.

The cast is put together very well and all the leads have great chemistry. I hope your cappers will follow through with this drama. I LOVE IT.
Prosecutor Princess FIGHTING! the underdogs of Weds!

Omgosh, those HANDS! xD It's like they were all stung by bees or something. Wow, I can't tell who that is!

lol yeah... couldn't they have made the hands just a lil smaller.

this.. drama is a total surprise to me.. i never expect it could get to this good!!!
it's so mysterious..& fun to watch.. every
loving this drama!! it's really A MUST WATCH!!!

the hands look so fake though

Filmed on the 11th and airing in two days? My, my, so it begins.

Her hands reaallly seem out of proportion.

LOL everything was pretty realistic until the hands... they were too large imo

Oh God! Hilarious! As if this drama couldn't be any funnier. No wonder her character's trying so hard to be superficial and wears embarrassingly garish clothes and feasts on nothing but cherry tomatoes, making herself the butt of all jokes.
The hands! Hahaha!

and yes the hands are so WRONG...

HEr hands are SOO FAKE!!! they look like GLOVES!!! HAHAHAHAAH

Omo! So those were the times of chubby princess! Her hands are huge, but she still lookes lovely.

Prosecutor Princess is actually my favourite out of all the new Wed-Thur dramas. I like the other 2 a lot too. But PP I think is the most fun.

it's rather disgusting the number of fat-to-skinny transformations seen in media today, from Monica in "Friends" to Hanna in "200 Pounds Beauty". I don't know the storyline behind PP, but these fat suits seem to be more of an ego booster to the actresses than some less trite usage.

this is quite an unexpected twist but it adds layers to ksy's character. what i like about this drama is that they uncover layers off of each character adding depth and content to the storyline. i'm excited to see how this drama progresses!

Woww...it`s getting more interesting! I also can`t wait for this week eps...

OMG, talk about 200 Pound Beauty 2.0. I thought this was Hae-Ri's transformation for a special case, but that was her in Uni? (If only we all could make big transformations into a goddess like Kim So Yeon after we lose a few pounds......)

Omg those hands! those hands! The Horror! lol I don't know why but first thing that came in to mind when I saw them was BBC kids programme Tweenies.. argh so annoying coz I got the theme song stuck in my head now!..

PP is actually like many others my favourite drama if the infamous Wed/Thur slot.. its way fun-ner!

I wasn't sure I was going to like this show, and the first 2 episodes did nothing to change my mind, but it really started to grow on me with episodes 3 & 4. And now this! It's definitely not the typical kdrama rom-com with the typical plucky, dowdy, yet cute, heroine, who meets the typical cold/troubled/bad boy hero, changes his life and they fall in love scenario. I gotta love it if just for that.

Now I actually have reason to watch it other than to see PSH's smile. If we put him in a smile-off with CJM from Cinderella's sister, who would win?

Do people's hands get fat,too?

Ugh, I really REALLY hope this isn't played up for laughs. I thought they showed wonderful and very surprising sensitivity when Hye-ri had that binge-eating episode when she got so stressed out. They didn't make it goofy or laughable, and the audience could tell it was painful for her, made all the more so when she overhears her coworkers talking about her. For them to turn it into a joke would just be absolutely horrible. The absolutely ridiculous-looking hands do not give me much hope.

It's not played up for laughs. It serves as another perspective looking at MHR's personality, you know, superficial, oblivious, and self-centered.

OK wtf is up with the ends!!! They shud make the hands look realistic or something!!

I guess they used the same make up artist that did 200 pound beauty, because she also looked like she was wearing gloves too.

I wished they had contacted, the people who did Martin in Big Mamma, or even the one who did the make up for Tim Allen in Santa Claus, because they looked more real to life. Other than that, I could not recognized her at all.

It appears that Ma Hye Ri and Park Shi-hoo the two leads were ugly ducklings when they were younger. It looks like they had a painful childhood. I can't wait to see more of their past played out. Anyway, I have grown to like this drama, Episode 3 was the turning point for me. You've heard of being book smart, and sensibly dumb, right? Well Ma Hye Ri takes it all to a new level. I just LOVE her!

lol the hands... are so overly big.

I love Kim So Yeon!!!! That's hillarious pic make me love her even more, lol

i hope her character is more bubblier and cuter when she's big. she already is cute and bubbly, i like the character.

No wonder episode 3 hinted at a food/eating disorder. So she did have a weighty past.

wow! couldn't recognize her !!
ahh what a fun dramaaa

i have fallen head over heels for Prosecutor Princess..those who missed out this drama , i PITY them..

Truly agree with everyone who say it's the best drama on the Wed and Thursday slot. Truly great to watch. Missing it means missing one half of your life.

(O_o) What the hell was wrong with the make-up artist? I don't remember I looked this terribly fat when I was (once upon a time) over 80kg :-| (not to mention I'm much much shorter than KSY - just about 5' 3") I assure you this is the look of an at-least-over-100-kg princess (@[email protected])

KSY look very different...she juz lovely eventhough she transform into a fat girl...hahaha
i gonna watch this on wed n thursday..
everyone that missed out this drama, i pity for them...(agree with anna hae)
i love ma hye ri and prosecutor yoon....

Oh, was that horrible ahjumma outfit not enough?? Lol!!! Reminds me of Get Karl! Oh Su Jung and yeah, 200 Pounds Beauty. Looks like she's about to get crushed in the 2nd picture...awwww.... Really looking forward to this wed/thurs....

lol when i saw this pic I WAS LIKE LOLOLOLOL, didnt even know it is her

HAHHA OMG. I thought her hands were gloves! So fake looking.

I love this show from the start just because the dialogue was catchy and the two men were soooo drool eye-candy delicious. Now it is my 2nd favorite drama for this season.
I like how the pace of this drama is just right unlike PT. I love all of the characters, even the mean father (I liking him more each time he tries punishing KSY). Plus the dialogue between the three main characters is alway sparking which is lacking in OML.
Unfortunately, it still can't beat Cinderella's Sister, but other than that-This drama rocks.
Thanks for the heads up-I can't wait to see this scene-I am now wondering if mysterious lawyer boy knows about this part of her past??? I so want her with him and not prosecutor.
Aja til Wednesday!

...no wonder, all Hye Ri eats nowadays are just cherry tomatoes!!! she used to be 200 pounds!!! Another 'twist" to this wonderfully funny & awesome drama!!!
...unlike most 'lawyer-dramas"..PP has me waiting,& anticipating each & every episode!!! It has filled the WUAS void + the 2 leading men are HOT!!!