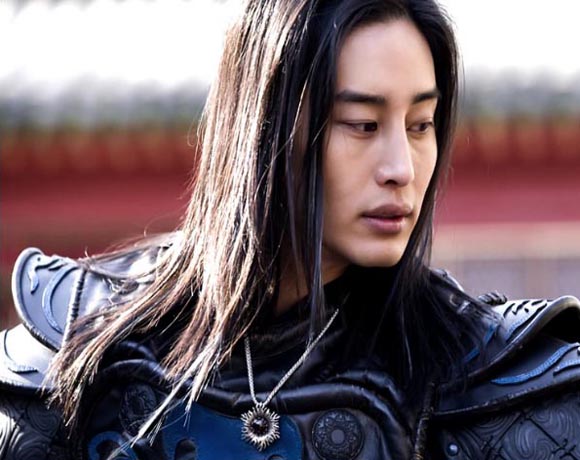 Philip Lee is probably most known for his drama debut role as Cheoro (as pictured above) in 2007’s fantasy sageuk series Legend (Taewangsasingi), which he followed up by playing a man on a revenge mission in last year’s contemporary thriller Story of a Man. His next project returns him to the historical genre in Faith, a medical series starring Lee Jun-ki and Kim Hee-sun.

(However, it is noted that currently Lee Jun-ki’s casting status has become uncertain due to the issue of his upcoming military service requirement. The drama is planning to air later this year, but there’s not much room to play with, as Lee Jun-ki will have to serve by the end of this year.)

The drama is set in the Goryeo (Koryo) era, but it doesn’t sound like a straight sageuk (unlike, say, the current medical sageuk Jejoongwon), and is instead described as a “fantasy medical drama.” He plays a skilled and notable doctor whose cold personality gives him a proud image.

This reunites Philip Lee with director Kim Jong-hak, with whom he worked in Legend. (Trivia! Legend was written by Song Ji-nah, who also worked together with PD Kim on 1995’s Sandglass. Writer Song was so impressed with Philip Lee’s performance in Legend that she wrote him into her following drama, Story of a Man. Her next project, by the way, is the anticipated campus series What’s Up.)

Faith is being written by Jung Yoon-jung and Hwang Hye-ryung, who wrote for both seasons of the hit cable drama Chosun Police. Not a bad lineup.

totally did not recognize him at first. when i read the bit about soam, i was like, who did he play..? OH! :D
didn't even know he was in legend. cool beans :)

sigh. phillip lee was dreamy in SOAM. not being a korean language speaker, i can't tell if he has an american accent when he speaks korean. does he? his little english asides in SOAM were funny . . .

I watched Legend just a few weeks ago and LOVED his character. I even did a gigantic post with pics about his character! I can't wait to see his next drama!

Now this makes me Happy: Lee Jun- Ki and Phillip Lee together in a drama makes tears form in my eyes. So much fioness should not be legal... oh yea, and I like their acting too.

@moana, Philip Lee is one of the only actors I can think of who speaks both Korean and English fluently without accents. (Han Ye-seul is fluent, though her English is slightly accented.)

Lee Byung-hun actually has pretty good English. I saw his CNN interview back when he was doing IRIS and I was pleasantly surprised. Lee Da-hae is pretty good too but she has a cute (strange?) mix of Australian and Korean accents when speaking English.

But I agree. Philip Lee speaks perfectly with both.

mahalo, JB and pabo ceo reom, for the info on philip lee. will have to stalk, i mean, watch him on FAITH.

mmm...he does look kinda like a woman on that pic above...but still, I can remember him in SOM....

and I agree with JavaB, his English and korean accents are great!

i thought he was born and raised in the states? he has korean citizenship now i'm assuming?

He must be their offspring. Yes, it makes perfect sense.

I really hope Jun Ki's military enlistment will not affect the shooting of the drama.
I am sorry, I have to say ,Philip looks kinda weird.

Great..Philip oppa is back...Luv him so much in 'LEGEND'...the quiet time, mysterious and sooooooo good looking....Really can't have enough of him. But great.. another drama with him on the way...Just can't wait...fighting...

He looks fine in that pic :D I sure hope Lee Jun Ki gets to do this one last drama before he goes off to the military, his sexiness will be sorely missed...

Speaking of Korean stars who are fluently bilingual - does the actress who played Hee Jin in My Name is Kim Sam Soon (Jung Ryu Won I think it is) speak without accent? Sorry if this is off topic, I just got curious because she seemed really fluent in English.

Phil is so stunningly sexy..and he'll look mighty fine in a Josean fighter robe.. He should be in more dramas!! I love him in SOAM ..didn't say much but his style n stares were enough to make me swoon!!

Oh Ji ho and Han Jung soo did the long-haired, Joseon warrior look better in "Chuno" (long-haired and still masculine-looking), as did Joo Jin mo in "Bicheonmu" and the film "Musa."

YAY! Philip Lee is sooo dang hot! I love him ever since watching the drama Legend. But I haven't see or heard of him after the drama ended until now. Yipee! He's soo dreamy. Hehehe. =P

He looks hot and always mysterious (few speaking lines, face almost devoid of expressions ,though kinda wooden ). Wish they give him parts that will give him more expressive moments beside the suffering ,quiet, angsty onlooker , lover .

But relatively new in the scene he has had several dramas tucked under his belt .

For his next work I hope they give him some light comedy where he would at least smile .