In 2003, Kim Rae-won and Jung Da-bin (who passed away in 2007) starred in the MBC drama Attic Cat. The story has now been transferred to the stage, and the production held a press call on April 7. Two of the leads are actors you may have seen onscreen before: Hwang Bora (Love & Marriage, My Girl) in her theater debut and Lee Sun-ho (Tamra the Island).

The drama was one of the first to feature its leads living together, and director Kim Tae-young said, “When the drama aired, it had a provocative subject. Also, because one of the drama’s actors has passed away, I felt some burden.”

He added, “We based the play on the drama, but a lot of the structure and plot is different. You’ll be able to find new entertainment in it. We told the story of poor but hard-working youngsters living together in a rooftop room in a romantic and lyrical way.”

The writer is the same person who scripted the original, Kim Yuri, who said, “In the drama, the female lead is living her life, but didn’t show an active personality. But the play is different. I’m happy to see the story I wanted unfolding before my eyes.”

As the first drama to show its leads sharing living quarters, Attic Cat was followed by a number of popular entries in the category like Full House, Fantasy Couple, Bottom of the 9th with 2 Outs, and most recently Personal Taste. As with most dramas of its kind, it suffered from a lot of stretched plot points to get one person to leave, then come back (then leave, then come back), but it also had a lot of charm and very cute chemistry between the leads.

The play will run through May 30. 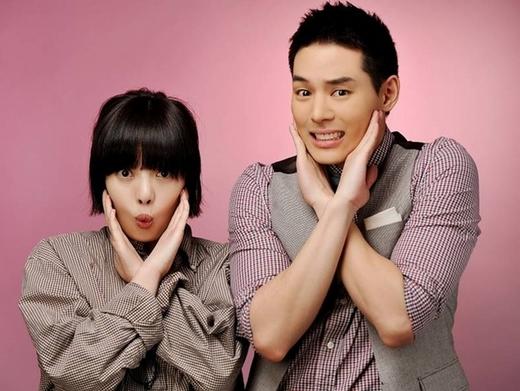 i didn't watch the original drama

but i think it's going to be interesting

i'm already interested based on the stills how its going to be done strcturally/physically. a stage is so limited in space that it makes me wonder how they are going to use it

and its about time i see this actress act in something else!!! :P

I really like Lee Sun-Ho, and Hwang Bora looks cute. I wish I could see this.

I love the theater, I promise myself at least a Broadway show every time I visit Manhattan. I live in L.A. and it's just not the same great atmosphere as seeing it in NYC. I hope you all give it a try if you haven't already.

I have to try catching a show when I visit Seoul again. I enjoyed 'Attic Cat' tv series, and it seems I still feel remorse for the lost of a good actress.

Aah, I love Attic Cat - the drama, and miss those scenes where they'd both sit on the rooftop table, peeling garlic. There was something very atmospheric about those scenes.
Shame I can't see this show. RIP Jung Da-bin

In the drama, Kim Rae-won was so lovable despite playing an absolute coward. The character was never mean-spirited, and I couldn't help but root for him to become the best version of himself, even if I wanted to yell at him most of the time. That was, I think, the special thing about Attic Cat, aside from the fact that it was first forced living situation drama.

I didn't really like the drama itself (so, SO repetitive), but if they've livened up the plot and script, I bet it could be good.

i didn't finish the drama.
it's kind of draggy.
I only watch it cos i read the recaps on 1 book and feel deeply for the recaps.
but wow i didn't know that this is the 1 of the first drama on living together.
i wish i can watch the play.

Lee Sun Ho is cute. It's a pity no one subbing his WGM's cuts.
I always want to see musical shows like this, too bad there are only few shows in my country, especially the good ones :( .

I don't know if it's just me but I strangely feel dislike the actress above at the very first sight even though I've never heard of her before this article :-|

wow- the styling for the press photos makes me want to gag.

a little google-fu tells me that they had 1 song on the Successful Story of a Bright Girl soundtrack - Honjajigin Sarang; and 1 on the sound track of Mermaid (2002) - Nae Ah Peun Sarang . And since I don't read Korean, that's about as far as I can help you without diving into Korean databases.

i love this drama.. although there were dragging and repetitive scenes, but kim rae won was absolutely adorable and jung da bin played the role well, too. i love them both, by the way, and it's such a sad feeling knowing that she's dead.