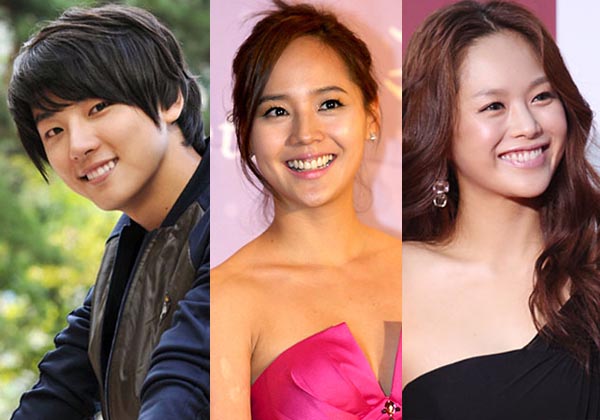 A new Wednesday-Thursday show is gearing up for its premiere, KBS’s Baker King Kim Tak-gu, which will replace Cinderella’s Sister after that show wraps up next week. With its production team, it looks like Baker King will have a much lighter atmosphere and provide a sharp contrast to the moody Cinderella’s Sister, as it brings together director Han Joon-seok (Capital Scandal) and writer Kang Eun-kyung (Oh Pil Seung Bong Soon Young).

The story features characters who aim to become patissiers, and the main cast is led by Yoon Shi-yoon (a breakout star of High Kick Through the Roof), followed by Eugene (Creating Destiny), Lee Young-ah (Iljimae, Golden Bride), and musical actor Joo-won. (And to be honest, based on the character stills released (see below), I could barely recognize the stars — I had to do a double take to confirm that the cast hadn’t in fact been swapped out at the last minute.)

Baker King Kim Tak-gu is a “human drama” (which is a commonly used but weird adoption of English to mean, I can only suppose, that the story is “humanistic”) and features the success story of Kim Tak-gu, played by Yoon Shi-yoon. Tak-gu is a bit old-fashioned and simple, but also a morally upstanding guy. His charm comes in his frank, straightforward demeanor that has a way of connecting with people.

Lee Young-ah plays a character with a keen sense of taste. She and Tak-gu learn all about the art of baking from her grandfather and dream of becoming pastry chefs.

Joo-won plays Tak-gu’s constant rival, a son of a rich businessman and heir to his father’s bakery enterprise. With a difficult personality, he’s not the type to go after something with honest hard work, but he knows ways to get what he wants.

Rounding out the main foursome is Eugene, who is a bright and intelligent university student who’s involved in the student movement. She grew up poor with an alcoholic father and was the first love for both men.

Baker King Kim Tak-gu held its first script reading on May 14 and will premiere on June 9. The drama is slated for 36 episodes. (Wow — it’s been a while since I’ve seen a contemporary drama do that many episodes in a midweek timeslot, particularly a trendy one. Usually the longer modern shows are dailies or weekend shows.)

Via My Daily, Joy News

Wow! I see what you mean about doing a double take. Is that really Lee Young-Ah? She looks very... un Lee Young-Ah to me. &what's up with the two female characters looking so dreary? I'm used to seeing Eugene looking much more vibrant and cheerful than that...

Thanks for this! Ive been waiting for more news on this drama! I'm not super hyped about it but still quite excited since i like the cast. and Eugene looks so young in the picture!! i was excited when they said park shin hye would be in the project but even without her, i feel that the drama might work...
altho i also has potential to be boring but i'll give it a try!

for this drama.. who is lead actress? it has been a while since we had a longer trendy drama in a wed-thur slot

36 episodes? okay Show, sorry but I ain't watching you. (Unless of course, you turned out to be surprisingly wonderful!)

For a lighter atmosphere.. that last picture looks something like a melodrama. So serious.

Yet another drama with noonas...

Meh Lee Young Ah hair... God why did they give her this hairstyle ?

I wonder how this drama will go,,,,since there is Eugene, i will give it a try

My gut tells me this is going to be a forgetable drama...but... my crush on lee young-ah will probably make this must-see anyway

and on a fashion tip: joowon's suit looks super comfortable I WANT IT

Isn't Eugene a little old to still be playing a university student? o_O

I think most Asia women look like they are in the teen when they really in they 20 and some 30, so it not about your age but what age you look. I love me so Lee Young Ah every since Golden Bride and Iljimae I have become a fan.

what happened to park shin hye? wasn't she supposed to be in this?

heck, I'll be watching this for Eugene,aka, my favorite actress of all time. :) she's looks gorgeous in that picture!

Oooh did anyone notice the dark vs light thing in that last pic? With that adorable old man in the middle? x)

I'll wait for recaps before starting this. But it sounds intresting :)

Yeah I noticed that too
They said the main lead was PSH in the beginning but I thought it was never confirmed :(
Personally I want something more challege for her though
Oh well, I hope this will be another good drama
Will you recap this drama JB?

doesnt look so trendy... all the photos give off a melodrama feel... not too sure about this one...

i was just wondering what was following after cinderella's sister!
we shall see

Eugene acting equals me watching!! She's looking devastating as usual. People really to get over this "age" thing. First of all, I wasn't aware that there was an age limit to being a university student, and secondly; it's called acting. The make-up people can take care of any imperfections (as if she had any?!!!) that mIss Kim may suffer from...

Wow that IS a lot of episodes for a midweek trendy drama.

At first I felt Eugene was miscast since she is a bit older than Yoon Shi-yoon. But I guess she does have that youthful look.

I've missed her since Creating Destiny so I guess getting to see her is better than not.

Wow. 36 episode. Usually 16, 20 and 24 episode I can watch. Only The Sons of Sol Pharmacy House I watch full 54 episode without skip. However after Cinderella sister I will watch this one. From the picture it looks like there are rivalry happen. I expect some smart comedy. seriousness, aspiration how to become successful baker, romance, ensemble cast, great acting and very good storyline. No matter people say I will try to watch despite 36 episode that mean many episode to watch.

i maybe watching...
Cos i kind of like eugene.
I don't know why but it reminds me of a old drama call 'really really like you'.
I know it's different...

Lee Young Ah's hair!!! (Note: While watching Golden Bride, I seriously thought she was not Korean.)

Yeah, my lovely Eugene is Back.

@soulbee...yes, the light vs the dark.... Eugene will apparently be in her first role as an antogonist....change in habit from goody two shoes to villainess... Good luck to our Eugene. She can be a teenager, a college student, a goody two shoes or be evil, my best to her.

hmmm... not really one that i would be wanting to follow...i think its the 36 episodes that's switched off my brain...though i gotta admit i may take a peek for the sweets "bakers delight" scenes???
Lately i've been wanting to tap into a DRAMA drama...angsty love lorn tear jerker along the winter sonata peoples dying of cancer lines...... its a weird craving i know! I think it might have a little something to do with watching Cinderella's Sister do so many teary scenes and not really feeling caught up enough in them... ugh, i totally don't know what i'm talking about here!
Wish this new drama and the actors all the best!

Might watch this just because of Eugene. But I'm not too comfortable with how she looks in the second photo...

urgg Eugene. Never loved her, never will.
But everyone else in the cast is so cute.
I, of course, always give a new drama a chance. BUT if Eugene pulls a trick, then NOOOO.
lol

Whoa, what happened to Lee Young-ah? Why does she look so...unflattering?

i thought Park Shin Hye took the role in this drama, is she replace by other female artist?

Will definitely watch this show because of eugene whom i like in I really really like you and Three dads. Have stopped following CS temporarily as it's kind of depressing to watch.

Will definitely watch for Eugene and Lee Young-ah. I really hope this drama gives depth to Eugene's character (considering her background). :-)

the fourth guy looks a little bit like Kang Dongwan~or is it just me?

I love Eugene even if she has made some questionable drama choices. The older actor who is sitting in the chair wearing a beige suit (whose name I can't recall) is also an EXCELLENT actor.

I LOVE YOON SHI YOON BUT about the lead actreess????? i hate them both. can't give it a chance

36 Episodes !!! ???? DAMN !! i'm already suffering from CS.....If the story is interesting like Chuno...hahhaha..LOL...even Chuno only have 24 episodes..the lead actor look HOT !! And i love Eugene in 3 Dads and 1 Mum..the show have a comedy part in every episode !!! kind of dissapointing that Park Shin Hye isn't the lead actress though...huhuhuhu....oh well....still looking forward to watch this.HOPE it doesn't dissapoints me..........LOLz..

I thought Park Shin Hye would be in this drama? or am i wrong, does anyone know?

who's the Lead actrees,,
i love love them both but love much for Lee Young ah since goLden bRide..

who is the main female lead of this drama ? like will EUGENE END UP WITH TAK gu ..cause i sure hope so...

i'll just give it a try bcos of eugene..cinderella sister is so boring with a lot of teary scenes..i just skipped it till the end and i just watched it bcos of moon geun young...but the best drama that i've seen this year was totally PROSECUTOR PRINCESS...it's very catchy and romantic with sense of humour in it...i never thought that i'm gonna end up watching it again and again...lol
sorry for writing crappy things here but i highly recommended you guys to watch prosecutor princess... definitely worth watching it! seo in woo and ma hye-ri forever^^

i'm watching this now..and to be honest i was surprised that i actually like the story..yoon shi yon acting is daebak! the child actors and actresses are very good too~~

procecutor princess i watched already...its the best drama i really like it...