Kim Jung-eun takes over I Am Legend 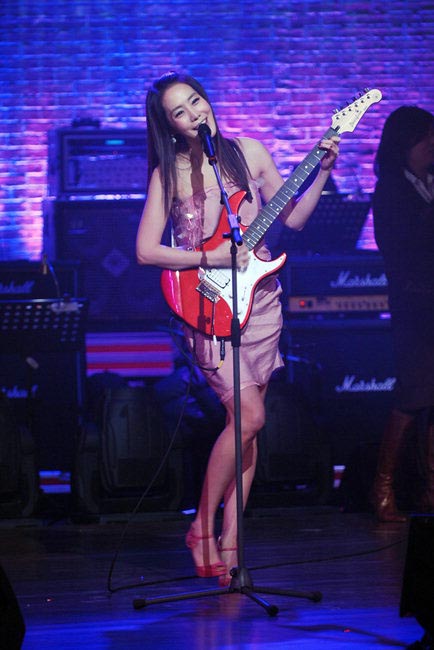 Kim Jung-eun is taking the role vacated by Kim Sun-ah as the lead character in the ajumma-turned-rocker drama, I Am Legend.

While I was more excited about the prospect of Kim Sun-ah heading this drama, I do like Kim Jung-eun as an actress and think she’d do quite nicely with her knack for comic timing. She has also performed multiple times while hosting her music-talk show Kim Jung-eun’s Chocolate, which is where the above photo comes from. I can’t think of too many actresses in their thirties who can portray trophy wife, ajumma, and lead singer of a band all in the same drama, but I have hope that Kim Jung-eun will be able to pull it off.

Kim’s last television role was in MBC’s General Hospital 2, a year and a half ago, and she has been hosting Chocolate since then. In fact, I Am Legend‘s director Kim Hyung-shik (Surgeon Bong Dal-hee) sought out Kim because of the live music program, and as she has always had a strong interest in music, Kim accepted the offer. In addition, music director Lee Jae-hak has come onboard; he worked on the hit sports film Take Off and the music-world-based 200 Pound Beauty.

The story centers around Jeon-seol (which means “Legend”), who was the lead singer of a band in her high school days and ruled her neighborhood as the coolest of the cool. As an adult, she marries into an upper-crust family who treats her poorly, and she ends up divorcing. She decides to get her groove back by forming a new group, which becomes an “ajumma band” of women who use music to heal themselves and deal with their own personal issues. The three other band members who had been cast back when Kim Sun-ah was headlining are still with the project — drummer Jang Shin-young (Winter Bird), bassist Hong Ji-min (a musical actress who was in Style), and guitarist Juni (former singer of rock band BellaMafia and hacker in IRIS).

I Am Legend will air on SBS after Coffee House ends, premiering in August.

Tags: I Am Legend, Kim Jung-eun

Awesome news!! So glad that the replacement is Kim Jung Eun! No offense, but much much better! :)

I think KJE will kick this off, as she does comedy well.

Her GH2 portrayal was so lack lustre.

I love her. So I'm so excited.

Good news. Watch it for sure.

I have to agree with sayroo, I also believe that she's a much much much more capable replacement!

Now, I'm going to watch out for this drama!

i gave up on this drama after Kim Sun Ah left... this news makes no diff to me.

Well I like both KSA and KJE, and both of them are like super buddies... so it's good news to me either way! YAY!

Oh, I can't imagine KJE in a ROCK band...but this is interesting!
Too bad KSA couldn't do it, she has the rocker vibe IMO, but KJE is not a bad replacement..
I wonder how she will do the rock songs! :)

Looking forward to this project.

She likes music and her singing is not bad tho' not that perfect. But she can hit a note. Still I am happy to know this drama. Good luck to her.

I'm not sure about KJE to be a rock singer! uhm???

@alodia, you know that I have nothing against, KSA! :D I'm just a loyal KJE lover like you for KSA! Jjang~!

Not gonna lie, more excited about her than Kim Sun Ah. Just a personal preference. But erm, she doesn't look rocker chick enough.

Have you seen Happy Life with Jang Geun Suk...seen it and I was kinda bored of the subject itself(even JGS is in it singing really well and the acting isn't bad either ) so the ahjussi turned singers or ahjumas turned celebrities...I don't have the confidence it will work out or I would watch it

actually i wondered why kim sun ah gave up on this project?? But i'm happy that kim jung eun picked up on this drama, and i'm willing to follow up on it!~

Love her! Very excited for this drama.

KJE seriously can sing and perform quite a bit, from the Chocolate episodes I watch, so I am pretty excited about this...

Hong Ji Min, I think she was also the big lady fr Xanadu musical and On Air...
She does spunky really well...

Am a bit suprise too... in RL, KJE and KSA are known to be besties along w Kim Won Hee... "the 3 Ks" is what they are refered as in Korea aren't they... what a suprising change of situation... ^^

Omg, I'm still pretty excited about this even though yes, I would've loved if it were Kim Sun Ah instead!!! But nonetheless, Kim Jung Eun is a good actress and I admire her for the person that she is! :)

Maybe Kim Sun Ah will have a cameo for her friend in the series! ;-) I wouldn't mind it. heheh Anyway, KJE, fighting! :D

EHHHHHH????? oh well. though i don't like her, i haven't seen her in any dramas since lovers in paris, so for me this will be like her comeback in my mind.

Oh My... Sorry but Kim Jung-eun as a rockstar? Really?

I don't get any "sassy" or "dark" vibes from her so it's hard to picture her in such character... More like a country singer kind of gal ^^;;;

I'm kind of... Disappointed I guess ?

Yes! My mom loves her! LOL She'd been asking me forever if Kim Jung-eun is in anything new. I'm glad it's this. This seems fun. She'll like it.

Just give her a chance! By the way, that picture is from her show CHOCOLATE and not related anything to the drama itself. I think Kim Jung Eun is capable of pulling it off but let's hope the writers will give her character the charisma that 'oomph' factor in the storyline, then it's all good.

I'm actually really excited for this!

Aso, there's still no word of who the male cast will be?

I am really hoping it's JUNG JOON HO from 'Iris' & 'Last Scandal' becaues for one, he's so good looking and the other reason is that he & Kim Jung Eun would look REALLy good together. I'm also almost positive they both will heat up the screen! ;-) He could either play her husband or the band's strict manager who later falls for her...

Wait! I guess those two have already starred in a film and drama together. EVEN BETTER! ;-) At least they won't be shy around each other since they've worked previously together!

i wonder if she will continue hosting chocolate?

Could've been a lot worse. I'm actually ok with it!

She'll likely continue hosting Chocolate... she did so while shooting her Kdrama 'General Hospital 2' so why not? :)

I liked her in GH2 ^^
It's just that I got a darker atmosphere from Kim Sun-Ah when she was involved in this project, which I don't really associate with KJE.
On the other hand, one of the point of being an actress/actor is to explore different kind of path... But to be honest - at this point - I'm just not convinced.

She got the Rock Stars Look... More Sexy
http://www.allkpop.com.lg1x1.simplecdn.net/wp-content/uploads/old/2009_stories/20090924_kimsunahkimjungeunelle_2.jpg

meh sure, i will give it a try,

how weird is that KSA's best friend got the role?
I might tune in.... but without sunah, I dont feel excited for this project :/

I don't mind Kim Jung Eun replacing Kim Sunah. Very different styles but i think she could pull this off. Let's wait and see.

i gave up on this show after KSA quit...

but now, i am all up for this again!!

but if IAL takes over coffe prince in august, what about LSG's My girlfriend is a gumiho? i thought that show would also be on SBS and premiering in August?

Kim Jung-Eun is adorable. Loved her since Lovers In Paris.

Superb choice for a replacement !

will definitely watch this drama.

KSA would have been better

but are they really close friends?
why would kje accept this when its understandable they will be
compared since ksa is first choice

@ loveya
(i love you~)
and yup they are, for many years already...
in fact they attended Park Sun Young's wedding together yesterday (or was that the day before yesterday?)...
they must have talked about it before deciding. they are from the came management company anyway (yedang ent). and i'm sure they have foreseen the what the public and the fans' reactions will be... for all we know they are laughing at fans' reactions right now. ^^

it will be more famous if kim sun-ah leads this...
kim jung-eun is nothing as compared to sunah...

I believe KSA is the best for the role!

This is right in Kim Jung Eun's wheelhouse. The emphasis isn't so much on rocker cred, but about a woman rediscovering love and second youth after divorce. She can play around the parameters of Cinderella without seeming inappropriately out of age, and she can dial it up emotionally regardless of partner. No mean feat.

I don't know how she will pull off the rocker thing I wanted to see herrrrrrr as a Superstar Pop Singer like Lee Hyoreee but will see so excited!!!!!!!!!!!

I wish the leading would be suFAAAAAAAAh Hot!

Lee Hyori is the one fit for the role

I cannot see KJE in this role

Soooooo excited to see KJE in small screen again.
Good luck KJE, my one and only korean idol.....