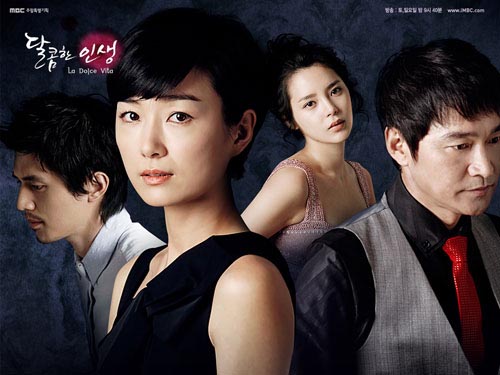 Another drama is getting the stage musical treatment, and this is an interesting choice: 2008’s intense thriller series La Dolce Vita, which starred Lee Dong-wook and Oh Yeon-soo in an adulterous affair (with Park Shi-yeon and Jung Bo-seok playing the other two in the respective relationships).

The drama was praised for its strong acting and dark ambiance, as well as film-level production values. There have been a handful of other dramas that have been turned into stage musicals, which include show-biz-themed On Air, vampire comedy Hello, Franceska, a Seon-deok spinoff centered around the Hwarang soldiers, and fairy-tale romantic comedy Goong. A number of films have also made the transition. Still, I say this is an interesting choice because this doesn’t immediately seem like a natural fit for a musical treatment (unlike, say, 200 Pound Beauty, which makes the jump easily since the film already incorporated a music-related storyline), and I’m curious to know if the play will be able to convey the drama’s style and feel.

The production has cast its stars, and while the actors are mostly active in the musical world, some are branching out into screen roles as well. For instance, cast member Jung Min will also be seen in the upcoming Gong Yoo–Im Soo-jung movie Finding Kim Jong-wook (he plays the Kim Jong-wook of whom the others are in pursuit), while Kim Jin-woo will be seen in MBC’s war epic Road No. 1, which he is currently shooting.

The musical version of La Dolce Vita premieres on July 14, and tickets go on sale later this month.

I watched this drama a while back, I didn't like it at all. I thought it was slow and boring. The only thing I like was Oh Yeon-soo's haircut :-) . Anyway.. I wish a good luck with the musical version.

one of my favorite dramas of all time! ahh, i wish i could watch this musical!

The drama was really good. I actually liked the two second leads better. LDW was fantastic except the first episode. The leading lady was fine but she didn't really touch me. I hated her butch haircut so much. Special mention must be made of the actor who played LDW's rich friend. He was so charismatic.

A musical??? I loved the drama. I adore LDW. But seriously..a musical? someone should give their head a shake and leave well enough alone.

i agree, there was strong acting and dark ambiance but it wasn't really good (for me). the story's really interesting but there's something in it that i did not enjoy watching, i can't point my finger on it but there's something missing. after watching it, i was like..okay, that's it? the devil is my standard for suspense/thriller-drama and anything less than that, i don't really get to appreciate :(

what's the musical will be like? i think people should consider their depression when watching this musical. i think this is a tearjerker.. i bet Mister X will watch this huh. he keeps talking about how good this drama was. i like the drama but when this turns out to be a musical, it is going to be a pain to watch.

Sigh. When will we finally have our What (The Hell) Happened in Bali, The Musical? Have we not any baritones who can sing through a fist in the mouth? LALALALA ARRGGHHHHH!!!!

Though I'm curious about how it will turn out to be,I think the complexity of the drama will be lost while condensing it into a musical.

enjoyed watching the drama as well because of the theme which I don't usually dig in, but same as others, I'm also curious on how this will be treated in the musical version. I admit, the drama was really written well

it good not so bad.....but it sooo slow and the storyline was queit boring too.....

LDW's rich friend is Jung Gyeo Woon, an underrated actor I like. He's in ' Sign " these days.

Incidentally, I tried to post something earlier in the entry about his hair and elfy ears but couldnt. Didnt know he has a considerable following

I liked him since I saw him in 2007's A Happy Woman where he played a husband who regretted cheating. Then fell head over heels in love with him after LYATT, which remains my favourite drama to date.

I also watched La Dolce Vita because of him. Didnt like it because it was a little too dark for my liking and the suicide theme doesnt resonate with me