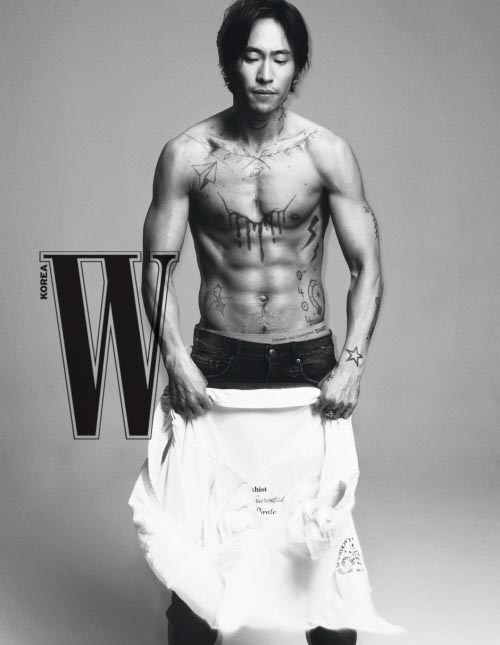 In the movie, which is a twist on the classic story of young lovers Chun-hyang and Mong-ryong, who overcame social barriers in Joseon Korea to be together, Ryu Seung-beom plays young nobleman Mong-ryong. However, the movie plays with the idea that Chun-hyang was actually in love with his servant Bang-ja, played by Kim Joo-hyuk, just as The Story of Hyang-dan had Mong-ryong falling for her servant Hyang-dan. But while Hyang-dan was a comic reinterpretation, Bang-ja Chronicles — which was marketed at Cannes this year under the title The Servant — bears a 19+ age restriction at home for its sexual content.

I just want to ask in the photo above, whatchoo lookin’ at? Scandalous!

In case you’re wondering how much of those abs are Photoshopped on, it seems not much. Ryu posted the candid shots below on his mini-homepage last week, and he’s rockin’ the choco abs. (Although I guess that doesn’t preclude them having been drawn on.)

The third pic is awkward.

Thanks for the post... but really, all i can say is

im a makeup artist and i can tell you from looking at the last two pics that there has definatly been some "enhancement". you can see, especially in the 2nd to last pics, that a lighter color was used to make his ads more pronounced and a darker shade to define them. but that is done alllll the time. and i still love him anyway.

I've always found quite curious the fact that in Korea, male stars are often showing a lot of their bodies. As contrary to Occidental culture, where you are used to see more "naked" women than men. I'd think "poor guy, he's used as an object". Especially the pretty boys of idol groups. Like in an episode of Oh My Lady, when Min Woo finished singing on stage for a fan event, he had to strip open his shirt so all the girls go mad. I mean, what's the point? It makes me think of the French Cancan, the dancers finish by showing their butts. I find this rather a hilarious concept.

Uhhh.... was he saying 'down boy' in that third picture? hahaha It's almost too risque! hahah

@5 aX, you "beat" me to it. honestly, it looks like his left hand is outside his underwear (what Koreans call innerwear) and his right hand is, uh, holding on inside.

h.o.t. (not the ex-group) pics. can't wait for the movie! We ICOMYM members are only too grateful that Korean men are objectified. ^^

Man, lucky Gong Hyojin. She'd be underneath and on top of that every chance she gets.

why are all these gorgeous-beautiful, highly molest-able men on the OTHER SIDE OF THE PLANET?

can't quite tell what i'm supposed to be seeing/feeling in Glorious McStudley's third shot there; kinda looks like we're interrupting something.

thanksmuch for the eye candy, jb. ^_^

racy racy! miss GHJ is one lucky lady! and with tht my image of korea being a conservative society goes to bits !!!! might i suggest some other worth candidates such as LMH, gong yoo to sail into these uncharted territories!

Plenty of body make-up. Some bodies are designed to reveal LESS IS MORE. 0 , o

I rather see RSB with artwork on his body than seeing all these pop idols with makeup and eyeliner. Rain with those faked eyelashes was a turnoff.

I love the second one x-x

Same with all: what is he looking at (third pict)?? @[email protected]