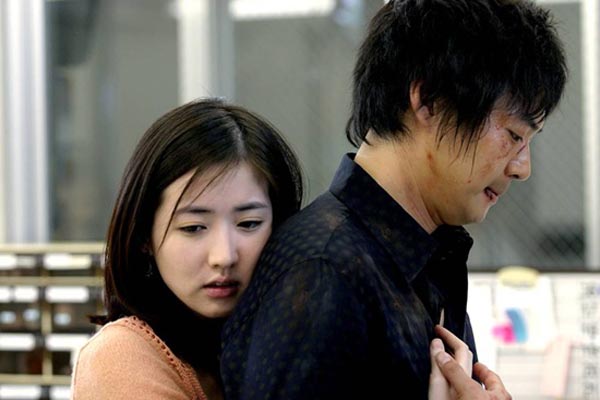 Five years after the film began production, finally the action noir Sweet Dreams is getting a release. The film is based on a true story about a young Korean man who gets caught up in a gunfight with yakuza members in Japan.

Cases like this are interesting (to me) because the careers of the stars have taken such turns since they shot the movie, and now this film takes them back to 2005. Sweet Dreams stars Yeon Jung-hoon (pre-East of Eden and –Jejoongwon, two of his recent big roles, as well as being pre-army service), Choi Jung-won (pre-Wish Upon a Star and –Kingdom of the Wind), and Lee Ji-hoon (in one of his early acting roles, when he was making the transition from singer).

According to the production company, the film underwent approximately 50 edits and has only now been finalized. They’d decided to set a release for last year, but an additional editing round by the director extended the process. Filmed entirely on location in Japan, the production had a budget of 4.7 billion won. Sweet Dreams will be released this summer.

I'll be keeping an eye out for this one.

I loved Choi Jung-won in Wish Upon a Star.

Wow! I didn't recognize Yeon Jung-hoon from the first pic and it took me a while to recognize Choi Jung-won~

Looks interesting though :) And yeah... a lot has happened since then!

do you know why it took so long to release this?

Who is the director and what other movies has he made? 50 edit; OMG.

50 edits seems incredible. Wow--I really don't think I would have recognized "Pal Gang" and I had trouble even with Lee Ji Hoon...

wow!! thanks for this article...
I am sure to check out this movie because i like all 3 actors! ^^
looks like a lot of effort was put into polishing this movie... it mght not have the biggest budget but i like how detailed and diligent they were.

Woah, is it just me or does Lee Ji Hoon look like Joo Ji Hoon in the 3rd photo?

Boy all 3 stars has really moved on man. The film is released on good time to catch the stardom on the 3.

CJW looks so beautiful in the first shot. I really liked her in WUAS. If only they had let the drama be a romcom instead of throwing in murders and suicide.

WAIT. YEON JEONG HOON WENT TO THE ARMY? D: where have i been?

^Yeoh Jeong Hoon Went to the Army right after that drama with Kim Hee Sun and Kwon Song Won. He came back and did East of Eden. That was why we didn't see him within two years. During that two years, I believe his wife Han Ga In did Witch Yoo Hee.

I wonder how the actors feel!

If it takes you that long to finish a movie that has no special effects, dont you think you should have given up by now?!

takes complete after 5 years!!it must a film that making by long effort
and it must be embarrass if the movie don't do well in box office
but i hope it do well in the box office even though didn't long and i try to watch this film because of yun jung hun. I don't see any of his drama after Sad Love Song with KSW (oh my thats several years ago!) ok i want see his performance in this movie because i want see the mature of his acting.

Depending on edits alone is stretching it a bit, since 5 years has brought new techniques and technologies of filming. Plus the social landscape must have changed quite a bit.The film has to compete with 5 years of advancement, if it doesn't match up or meet the tastes of the people, I can some what understand.

i love the angst of yjh on the third pic.. love it!.. the look in his eyes