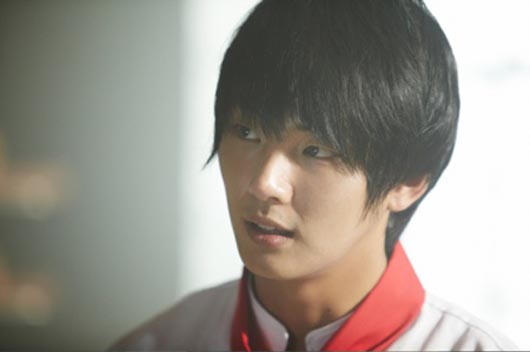 Just a week from its premiere, KBS’s Baker King Kim Tak-gu has released its first stills, which feature main character Tak-gu (played by Yoon Shi-yoon) and his rival Ma-joon, played by Joo-won. The two young men are aspiring patissiers, as is the character played by Lee Young-ah, Tak-gu’s longtime friend.

Theirs is a familiar dynamic (Mozart vs. Salieri): Tak-gu is the one with the talent and the passion for the art of making pastries, while Ma-joon actually dislikes baking but pursues this rivalry with Tak-gu because he wants to earn his father’s recognition (Dad owns his own company).

Baker King Kim Tak-gu is described as a warm and relatable human drama, and follows Cinderella’s Sister on Wednesdays and Thursdays. Its first episode airs on June 9.

The last three pictures, are they from the same guy? They look so similar. lolz

lol..at the last pic, i thought its kang dong won...

yoon shi yoon is so cute! :)
I remember thinking that when I saw him in highkick.
I didn't realize he was Hongki's friend from "introducing a star's friend"!! good for him! he got lucky :)

The middle picture after the cut, wow, so serious. I bake for fun! Maybe that's why I suck at it.

he does look a bit like kang dong won
im going to watch it for these good looking guys, haha

i think this might be another "pasta" for me; when i watched that drama i got hungry during every. single. episode.

@1 strawberryfieldsforever, I was wondering the same thing! :O

who's the new actor acting along side yoon si yoon?

who's the female lead ... eugene perhaps?

^eugene and lee young ah are both female leads i believe. when it starts i guess we'll find out who has more screen time.