On the golf course with Birdie Buddy’s cast 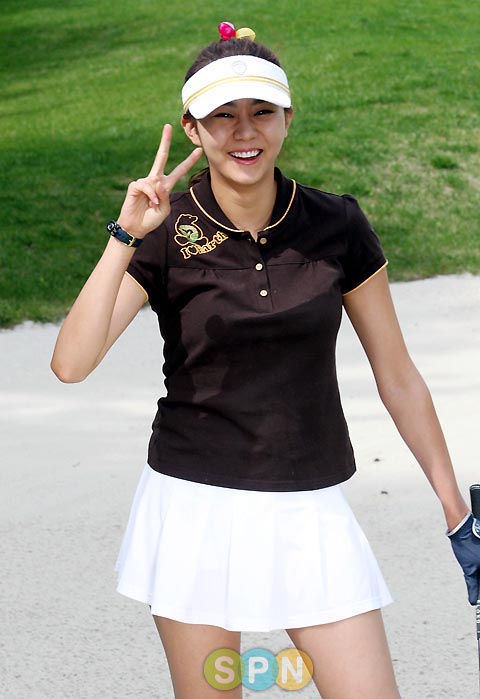 The first thing I thought when seeing these photos from Birdie Buddy was, Thank god the dreadlocks are gone. Maybe with that monstrosity out of the way, we’ll be able to focus more on the plot and the drama’s other qualities?

The golf drama starring UEE, Lee Da-hee, and Lee Yong-woo is filming much of its scenes at the High One resort in Gangwon province. These photos were taken on June 7 at the resort as the production filmed a competition wherein the two female characters, played by UEE and Lee Da-hee, are playing to gain membership into the semi-pro ranks.

UEE described her country-girl Mi-soo character, saying, “She’s a free-spirited person, which makes it comfortable to act. Sung Mi-soo is easy-going and has a positive mind, which is similar to me.” Mi-soo has learned golf on a meager budget, and her hard-working ethic appealed to UEE. The pop star isn’t a complete newbie to acting, but this is by far her biggest role; she had a non-speaking part in Queen Seon-deok and was a secondary antagonist in You’re Beautiful.

Lee Da-hee, on the other hand, plays the daughter to a golf course owner and a formidable golf talent, and they become rivals. Lee Yong-woo’s John Lee character was a pro golfer with the PGA.

In addition to the three leads, a special appearance was made by Sohn Bo-ran, a reporter who used to be a pro golfer whose participation came at request of the producers. (She’s in the pink skirt.) On top of making an onscreen appearance, Sohn acted as golfing consultant for the two ladies and explained golf terminology used in the scripts.

The drama plans to wrap filming by September, although it doesn’t yet have a broadcaster.

I'm still not sure about this drama but at least the dreadlocks are gone :3

i didn't know that this drama didn't have a broadcaster. treading on unstable grounds? anyway, golf is not my thang so methinks i'm just gonna skip this show; sorry UEE! (is that even her name?)

UEE!!!!!! She's like the only thing that make me even look into this drama. Still i couldn't find myself ot watch it.

The horrible dreads are gone. Did someone get smacked with common sense?

i cannot believe they have her in a tennis skirt

Whats with all the hype for this drama? It doesn't seem very interesting at all.

Lol, what's the reason for wearing a skirt to play golf, or any sport for that matter? You still have to wear shorts underneath.

RIP dreadlocks, I will miss making fun of you, you were one of the few (read:only) reasons I wanted to watch this drama.

I'm so jealous of UEE's body.

am SO JEALOUS of the legs on UEE, especially in the first row of pics, fourth picture.

I can't help but just keep noticing UEE's legs. They're tone and long and looks great in jeans and skin.

aah dread are gone...nw there's reason why i might catch more than 2 eps of this drama...that is if its still interesting

last time it was the dreads and now UEE's legs.

but if this is a real golf telecast, i think men are dying to see those legs.

me sitting in front of tv with my hombres watching UEE play golf and the other chick. dont care if we dont understand Golf. just like the old days when watching sharapova's game.

After all the mean comments about UEE's face while watching You're Beautiful, I can't really take her seriously. I blame all the crazy You're Beautiful fans out there who came up with most ingenious ways to describe her face... I don't think it's as bad as people said. It was just her (bad) luck to be a villain in a (fan fave) trendy drama. Hope this works out for her.

i't's funny! the other actress is as tall as UEE and she's pretty too. How come you guys aren't noticing her? lol

So Sad. Before this drama air, people already judge this drama very badly and someone think it will gain very low rating. Did not get chance to show the potential. Really hope it does not compete with very very great drama (Which may get high rating) so when this drama obtain low rating causes people have ton of reasons to say this drama is bad or anything else.

Her eyes in that first photo is hella scary O.O

Hmm...I still don't know whether I'll be watching this or not but I think I will still check out the first episode when it airs.

Glad the dreadlocks are gone too but can't help but wonder whether they might reappear in a flashback or something... D:

And is it just me or is UEE not actually holding anything in 4th picture in the first row?

while I am not watching this drama, I would like to see the dreadlocks. I am so
hoping that its just that they dont look right or dont fit the character.
Sounds like the dreadlocks in this instance were badly done or is it just a
general consensus/bias against dreadlocks.