A rainy, auspicious encounter in first teaser for Night Light 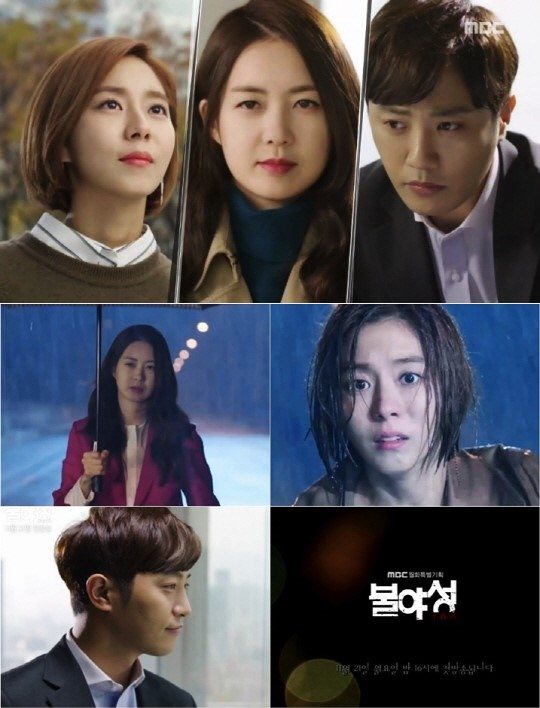 The first teaser and additional stills are out for MBC’s upcoming Monday-Tuesday drama Night Light, a story of three young and ambitious individuals ignited by their undying flame of greed in their pursuit of ultimate wealth and power.

Lee Yo-won (Ms. Temper and Nam Jung-ki) plays an elegant, “crystal-like” ice queen named Seo Yi-kyung. She changes the life of Lee Se-jin, played by UEE (Marriage Contract), a woman of humble beginnings who sets her sights on Yi-kyung’s life of luxury, eager to leave her dirt-poor past behind. Jin Gu (Descended from the Sun) plays Park Gun-woo, an upright, second-generation chaebol heir with a warm heart who loves Yi-kyung, his first love. But when Se-jin gets into the picture, and she starts resembling Yi-kyung more and more, things start to get complicated for him and the other two corners of the love/power triangle.

In a supporting role, Jung Hae-in (Yes, That’s How It Is) plays Tak, Yi-kyung’s reliable bodyguard. Yi-kyung spotted him when he was in his teens, and he’s protected her ever since. He has inside sources everywhere and can extract intel easily, sucking in information like a straw. He’s a chatterbox who knows every inch of Seoul with superior combat skills to boot.

In the teaser, a rain-drenched UEE stands before the vehicle of Lee Yo-won, who steps out with an umbrella and says, “You’ll catch a cold” before returning to her car, implying for UEE to hop in. Next, we see Jin Gu smile as he looks out the window of his corner office. UEE appears again, this time dry and looking hopeful as she looks up at the skyscraper before her. The teaser ends with Lee Yo-won’s the determined face and her soundbite: “Once I covet something, I don’t let go, whether it be clothing or people.”

A breadcrumb of a teaser, but a decent overview of the main characters at the center of an imminent power struggle fueled by greed. We’ll see how long Jin Gu’s smile lasts and whether or not Night Light will be a drama worth coveting.

Night Light premieres on November 21 after the end of Woman with a Suitcase.

Appreciate the update. Lee Yo-won or Uee, who is the female lead ?

i'm curious as well, excite to see how this drama unfolds though Lee Yowon is a fabulous actress so i'm wondering how this is going to turn out.

Both are lead uee was the first who was offred the first lead and yo won is her rival in drama .three off them are leads

I'm rooting for Uee even before this starts. Not a fan of ice-queen types, and always believe a good guy deserves better than that.

Although I am very much sure Lee Yo Won is the female lead based on synopsis, LYW's stills came out first etc, there will be interesting if we can have two female leads. Without taking into consideration so much who will gonna get the man at the end.?

The bodyguard is so cute. He looks like Kim Soo-hyun in those pictures, especially in the first one.

Looking forward to this cause I love all 3 leads. :D

isn't the bodyguard..the Bestfriend of Ahn Jae Hyun in Blood?

Will be excited to see this! I really like UEE. Hope this will be another good showing for her.

Me too.love uee acting and can't wait for her new drama

Doesn't sound too exciting, but I am in this for Jin-gu, hopefully it's a light watch despite the ambition theme.

The production seems really good. The writers has mix impression on his resume. Can't wait to see how this drama will turn out. But for all the talent in the world, why they choose Lee Yo Won and UEE though?

Queen is back ??? Cannot wait for this drama to start.?

Why I'm having Memories of Bali vibes on this? Maybe because the three leads has equally important parts which is rare. Excited to see the three of them.

Lol, all I can think about is how Uee played a young Mishil in Queen Seondeok where Lee Yo Won had the titular role and now they are supposedly rivals again in a way.

Really curious about this show and how everything is going to go. Still not sure what the story is but it seems good.

so lee yo won will become another yi kyung? LOL only this time it's seo not song as her surename. Anw, gonna catch this one for sure, the story and the casts are pretty interesting. Uh I kinda missed chubby UEE tho, she also looked pretty back then.

I prefer the chubby Uee she was prettier and had a gorgeous body, i loved her long hair too, she's so skinny now.

Yups, she does ! She looked so gorgeous back then with chubby cheek, long hair and body goals, even tho she's also still pretty nowadays. She's just getting skinnier and skinnier :(

I think I love her looks the best during You're Beautiful although her character was so annoying lol. But she looks too skinny, and she is tall. Let's hope Sang Yoon oppa will make a eat more food.?

Lee Yo Won is so pretty this woman doesn't age, like Jeon Ji Hyun, i think both are same age.

and she also a mother to three kids though. Gorgeous mommy.

It sounds so similar to "Cheongdamdong Alice"!

I really hope Lee Yo Won is the lead.

I'm hoping we get some major sistership with this drama since i love both female leads.

LOL chickachunga you sound like you love your dramas served with a huge helping of Pain.

I love Lee Yo Won so much!!