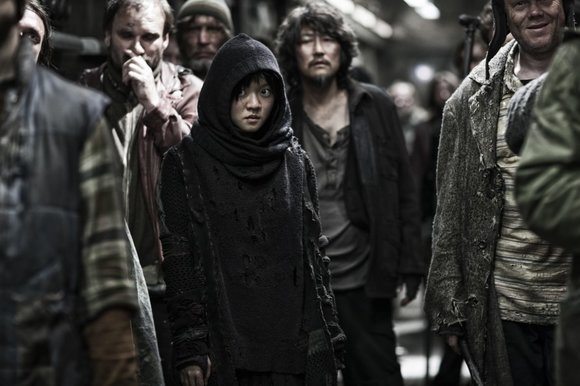 It was recently announced that critically acclaimed dystopian film Snowpiercer may be adapted into an American cable show on TNT. The one-hour pilot episode is in production now, and if it is well-received, the series may receive a full season order. Bong Joon-ho (Sea Fog) and Park Chan-wook (The Handmaiden), who were the original director-producer team for the movie, have agreed to return to be executive producers for the TV show.

The film starring Song Kang-ho (The Age of Shadows), Chris Evans (Captain America: Civil War), Go Ah-sung (Heard It Through the Grapevine), and Tilda Swinton (Doctor Strange) was set in a dystopian reality where climate change has caused the earth to become uninhabitable. The last of humanity is aboard a perpetual-motion train where a rigid class hierarchy is imposed, with the rich elite at the luxurious front end and the disenfranchised poor living in the squalor of the back. It was based on a French comic book series called Le Transperceneige. With a $40 million-budget, Snowpiercer is still the most expensive Korean production to date.

There was some controversy surrounding the sci-fi thriller’s release in the U.S. The Weinstein Company had bought distribution rights from CJ Entertainment, intending for widespread theater release. However, Harvey Weinstein wanted to cut twenty minutes from the 126-minute film to make it more suitable for American audiences, and director Bong Joon-ho disagreed. Eventually, the director got his way, but the movie was distributed through another company for a more limited release in the U.S. Overall, film critics loved the movie and its unique depiction of class struggles.

For the American television adaptation, Josh Friedman will be creating the screenplay. He has a history of writing popular dystopian sci-fi projects including the show Terminator: The Sarah Connor Chronicles and the film War of the Worlds. Based on his statements, we don’t know if any of the characters from the movie will be returning for the show, or whether just the premise will be the same. Tomorrow Studios, Turner (a Time Warner subsidiary), and CJ Entertainment will be collaborating to create the pilot episode.

Via The Hollywood Reporter, Deadline

Wow what a great news... This movie is one of my favs.. But I fear TV show adaptation might be a failure cause you know many American TV series got canceled after a season, I hope this one will make it. It would've been nice if one or some actors play again in TV version but sounds impossible since they're so famous TT.. I'll be waiting and wish they won't screw this up.

I will watch this. So hard.

Oh my goodness, the same executive producers AND Josh Friedman as the writer? I'm IN!! I loved Terminator: the Sarah Connor Chronicles so much, they could not have chosen a more worthy writer.

Josh Friedman is no stranger to sci fi. I liked War of the Worlds although it didn't have great reviews from the critics.

Bong Joon-ho and Park Chan-wook are both amazingly talented and well loved in Korea and Hollywood. I'm surprised that Kelly Masterson is not part of this.

I guess it's good that's going to be on cable. I hope they'd cast more Asian actors who are struggling to find roles in Hollywood.

Coool~ I'll keep my eyes out for this.

Has anyone seen Train to Busan yet? I think it's a little mix of Snowpiecers and World World Z, but a little bit sadder.

This has me somewhat excited. I am always hesitant when they create movie adaptations. I will keep an open mind.

Yes, I have seen Train to Busan. A great film too. It does have elements of Snowpiercer since they must battle their way to the front of the train. (Fangirl moment: Ma Dong-soek for life!)

A favorite of mine. I've watched it a few times.

Omigosh I loved that movie!

Korea is taking over Hollywood.

No. The movie is enough. It doesn't make sense for a tv series based on this. Joon ho bong is far too intelligent to give this a nod, considering the kind of films he's made and the push pull he had with American producers finally getting his way, for this movie, but with difficulty. Its his film. And his sensibility came through in snow piercer. That was more than e ough. This tv thingy is not good news.

I wonder how they are going to stretch the entire premise into 8 seasons?