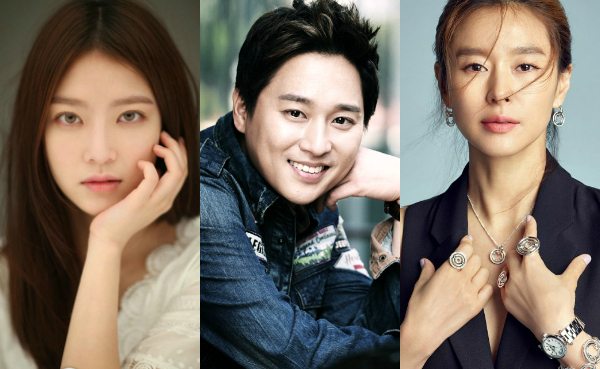 I’ve heard a lot of good things about rising actress Gong Seung-yeon (Master–God of Noodle, Six Flying Dragons), so I’m looking forward to seeing her in tvN’s new romantic comedy drama Introverted Boss, from the PD-writer team behind Marriage Not Dating. The opposites-attract comedy stars Yeon Woo-jin (Divorce Lawyer in Love) and Park Hye-soo (Age of Youth) as an extremely introverted boss of a PR firm and his suspicious new employee.

Yeon Woo-jin stars as a successful CEO who’s shrouded in mystery because he somehow runs a public relations business without interacting with people—he avoids social situations and appears to be a cold man, when he’s really just extremely shy and sensitive. The drama is about his personal growth as he begins to consider a life outside of his room, and the unexpected events brought about by the arrival of a strange rookie employee, played by Park Hye-soo. She’s an extrovert, of course, and she’s especially good at meeting with clients and doing presentations in front of others, but her one focus is getting revenge on her boss for reasons unknown. Co-stars include Yoon Park (Age of Youth) and Jeon Hyo-sung (Wanted).

Gong Seung-yeon will play a chaebol heiress who is introverted, described as the opposite of the outgoing heroine. Is this just a drama where everyone is either extremely introverted or extroverted, and there is no middle? Despite her status, the character is said to put a lot of effort into not standing out or becoming the center of attention. It seems likely that she’ll be a romantic rival for Yeon Woo-jin’s affections. Seeing as how both Park Hye-soo and Gong Seung-yeon are young actresses on the rise, I’m interested to see them go head-to-head on a meta level too, with such different characters.

Also joining the cast are hilarious supporting actors Yeh Ji-won (This Week, My Wife Will Have an Affair) and Heo Jung-min (Oh Hae-young Again), who provided much of the comic relief in PD Song Hyun-wook’s last drama, Oh Hae-young Again. Heo Jung-min will play an elite graduate of Seoul University (I’m already laughing) who works at the PR firm, described as a nagging team member who nitpicks about every little thing.

Yeh Ji-won has been cast as a working mom who’s a warm, congenial advertising planner, often seen as a mother to the whole staff. But she’s always late to arrive at the office and early to leave, and she’ll have a contentious relationship with boss Yeon Woo-jin. Yeh Ji-won was consistently the funniest thing about Oh Hae-young Again, so I have no doubt that she’ll make this character memorably wacky as well.

This casting is like a three-way marriage between Marriage, Not Dating, Oh Hae Young Again, and Age of Youth and I'm loving it.

Lol, that's what I was thinking. I don't even care that much about the plot; the actors and behind the scenes writer/production team have me excited already.

So happy for my bear, Seung-yeon. Always been such a hardworking person. She deserves all the nice things in the world ♡

This and Park Hye-run's new drama make me want to skip to 2017 real quick.

Good to see Gong Seung-yeon in this. She had limited screen time in SFD but it was enough to make me like her.

Sssssttt... those people seem more shy than introverted to me. Especially the lead, who's supposed to want outside interaction.

Yes, there is a difference.

Gong Seungyeon is soooo pretty. Like, damn gurl you have the pretiest eyes I've ever seen. She has this elegant aura too, that somehow make her looks like a chaebol(?) lol. I like her voice too.

True, I've seen her only in Master Of Noodles, she was good there and noticed her beautiful eyes.

I first noticed her in Grapevine - she has a very graceful, distinctive look. She certainly stands out from the cookie-cutter crowd, for sure.

i first saw gong on a variety program somewhere with her sister (a twice member). i forget what program it was; i just remember that they wore hanboks and went around eating all this street food.

at the time i knew nothing about twice or who either of them were, but i thought gong was so incredibly pretty and unique looking. even though she has the typical huge eyes and perfect features like other starlets, she still has her own look.

she is really pretty,

she has the same impression with Go Ara imo, that they just pretty but also distinctive

Yes, both actress have that mesmerized eyes. You can't help but left in awe.

Heo Jung-Min is reaaaalllly funny. He was great in Marriage Not Dating and Shine or Go Crazy too.

I love the cast, especially - Yeon Woo-Jin, Park Hye-Soo, Gong Seung-Yeon (Yes, I liked her a lot in Master: God of Noodles. She had amazing chemistry with Lee Sang-Yeob), and Ye Ji-Won. The only two whom I am not crazy about are Heo Jeong-Min who seems to always plays the same character and his performance is uninspiring; Also Lee Kyu-Han: I loved the drama "I have a Lover" and all the cast in it including amazing support cast. But he, although I loved his character, I was under-impressed by his acting. I have only seen Jun Hyo-Seong in "Wanted" - she was just OK in it.

Yay!another project for our baby bear gong seungyeon! This humble and hardworking girl deserves all the blessings and love in the world!
2017 will definitely be another good year for seungyeon.You guys should also wait for My Only Love Song, her webdrama with her hubby Lee Jonghyun and see their undeniably strong chemistry! Good job Gong Seung yeon,i'll definitely watch this drama!

The drama that full with great casts. Park Hye Soo and Gong Seung Yeon definitely among the rising stars that have the talent.

Our girls Gong Seung Yeon as a chaebol, wow. Looking forward to this. Yeon Woo Jin is a gorgeous actor. Park Hye-soo (Age of Youth) looks beautiful too. Hope she can act well.

Kyahahahaha.Love all of them in their respective dramas this year..
I hope this turns out to be good.

Am so happy for seungyeon unni she is sooooo pretty! I hope YWJ falls for her beautiful eyes just like LJH in WGM.
PS.Dear production team please have twice jungyeon a cameo as YWJ or GSY's sister so I can see some family ranting or sister cat fight! Seungyeon unnie fighting!!!

The line up is crazy.

This will be added to my watch list next year.