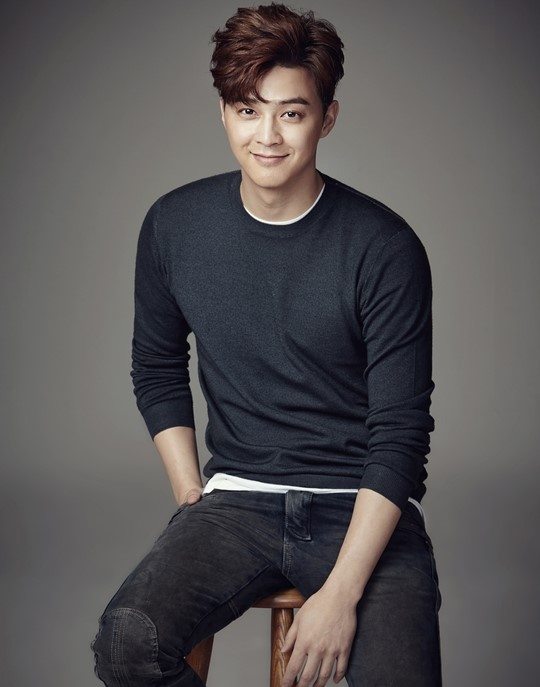 Kim Ji-hoon (The Man Living in Our House) has been cast in a new KBS sitcom special called Jung-nam Hyung. Jung-nam Hyung is an educational, Korean language learning drama created for Hallyu fans all over the world. Kim Ji-hoon takes on the titular role as Kim Jung-nam, the trusty hyung who’s an expert on all things Itaewon, the expat-friendly district in Korea notable for its international scene. He’s described as a driven man with a fiery sense of pride, who also has the adorable “little brother” look.

Lee Hyun-jae (God of the Workplace) plays Jan, Jung-nam’s friend from the Netherlands. As the master of Itaewon, Jung-nam helps Jan search for the woman he loves. However, a fierce rivalry will arise when Ik-soo, played by Monsta X idol member Hyungwon, enters the picture as the newly established Itaewon wiz.

A Korean language learning sitcom definitely isn’t your run of the mill K-drama genre, but I’m intrigued by the novelty. I wonder how the educational parts will be depicted while still maintaining the look and feel of a sitcom. I’m all for experimenting with formats, and it’ll be interesting to see whether or not the show succeeds with global audiences, especially since KBS plans to broadcast it on one hundred stations all over the world. I think if the show manages to strike the perfect balance of educational and entertaining, it’ll be a nice treat for both fans in Korea and across the globe. Also, who wouldn’t want more Kim Ji-hoon on their screens? Learning Korean may be slightly easier if there’s eye candy involved.

Jung-nam Hyung will premiere on KBS in December and air on one hundred stations via KBS World.

No more long vacation from dramas. I almost break up with him haha.

Ikr? I wanted to watch him in a sageuk so I watched Empress Chun Chu and just ff to all his scenes lol.
He could've been in one of these fantasy crap sageuks. Oh wait, I'd prefer him in Joseon X-files season 2. Please tvN.

He probably needs to do one villain role in popular drama in order to re-establish himself, just like Nam Goong Min (The Girl Who Sees Smell, Remember) and Yeon Jeong-Hun (Mask). He is a good actor but has been under radar too long. He did great in Jang Bo RI but again, only Oh Yeon Seo managed to shine more and moved to primetime drama, and not so much on other actors, although the rating success for that drama mostly because of the villain.

And Joseon X-Files, hopefully there is season 2 with similar casts of course or at least him. I recently re-watched Empress CHun Chu here and there especially Kim So Eun's scenes because I just missing KSE in a good role.

Sadly, at this juncture, think the ship has sailed on the possibility of a "Joseon X-Files" sequel (which is still the best K-drama I have watched).

KJH is another one of those talented K-actors who just never had that big hit to propel his career (Joseon could have been it if it had been televised after tvN shows started to get big ratings); same thing goes for his Joseon co-star, Im Jung-eun, who should be having a bigger career as well (actually has both talent and beauty).

KJH is another one of those K-actors who actually looks better w/ a long Joseon "mane of glory" than a modern, short cut.

Anyway excited to see him in a new project. He deserves better. ;)

He is definitely my favorite actor among the three appearing in Man in my House, tho his character isn't. I wish there were more scenes of him making an ass of himself or suffering as a consequence of him choosing that witch of a new GF.
Happy to hear news of him being cast in this sit-com, since it'll be longer running than a drama.

I would use Lee Min-ho's hypnosis to get rid of the other two if I could lol.

This should go well with that Korean lesson audiobook recorded by Lee Jun-ki. LOL

Is this real Mary? Because PLEASE LINK ME. O-O I'm planning on taking a semester off from Korean classes and I'm wondering how I should continue learning Korean by myself but if LEE JUN KI is the voice of my audiobook then I need not worry no longer. <333

Some beanies mentioned it before. :D Here:

It is indeed real! There are three volumes in the set, https://www.amazon.com/Hello-Korean-Lee-junki-English/dp/B00CDCNIV6/ref=sr_1_1?s=books&ie=UTF8&qid=1479421700&sr=1-1&keywords=hello+korean is the first volume, although you may be able to find it on eBay or alibris for less.

And that made it to MY wishlist LOL

So Happy For Kim Ji-Hoon.

Do any of you guys know the language-learning sitcom "Extra"? We watched it in my Spanish class in high school. It was hilariously bad.

Hopefully this will have more of a budget and less cringe-worthy acting, considering they are real actors. :P

Also, LEE HYUN JAE! I haven't seen him since SUFBB! <3

If you for some reason want to watch Extra (apparently it's spelled [email protected] lol) to know what I'm talking about, look here:

OMG Extra takes me back! We watched this in my high school Spanish class, I thought it was so annoying and badly acted but I guess looking back it was still a good learning tool. I hope this drama has better acting, but interested to see what a language learning sitcom will look like.

Oh wow, that sitcom is delightfully "Friends"y. There's also "Destinos", which is a telenovela version that came out 20+ years ago. https://learner.org/series/destinos/watch/

If someone did a classic chaebol/candy girl Korean-learning drama, ala "Boys Over Flowers" or "Heirs", that'd be great.

Oh goodness yes. We watched Destinos in my Spanish class in high school. Also one called La Catrina. Both of them were already old at the time when I watched them, and now they're ANCIENT.

But since I gave up on Spanish and switched to Korean, I'd be up for a fun Korean language-learning show.

This show sounds really interesting!! If it's funny AND educational, I'd wanna tune in. =D Plus, KJH is great!

you gotta love these producers/writers who kept us in mind....it's sweet right?!

it's like parents hiding vegetables in lasagna...they're hiding something educational in a drama... <3

WHOA the Netherlands! If Jan(please tell me it's pronounced as Yan) speaks Dutch while learning Korean I might finally learn something.
Loving Kim Ji-hoon in the Man in our House, but he should be the lead in every drama he's in.

I know right! I was so surprised to read that :O
I'll definitely check out this drama when it airs. But I too, really hope they'll pronounce his name right haha

That would be great, it's worth a watch for us. xD Googled "Jan" and he looks like he could play a biracial character so knows.

When I heard that this was a drama about language learning, I was instantly reminded of a movie I saw parts of called Please Teach Me English. It was pretty entertaining! That being said, it'd be interesting to see how this drama turns out.

*scurries off to find the movie*

Yay for Kim Ji-hoon! This makes learning Korean so much easier, haha.

If my Korean language teacher is as handsome as Kim Ji Hoon, I wonder if I ever understand a thing while my mind wanders off imagining things with him... hahahaah

Who cares about the cast, if it's gonna teach me Korean I'm in lol!

But I wouldn't object to a Few cameos though...

Yaaay finally! Im happy to see him this soon again! Wonder if theyll do the 'breaking the 4tj wall' monologues to teach us or theyll let the lessons flow... Ill give this a try but if handsome sexy hot as hell cutie KJH is the teacher, idk if I could stop stating at his face

I always look forward to seeing Kim Ji-Hoon
I was disappointed that I was not able to find his 2015 Drama Special "Funny Woman."
Luckily this time, On Demand Korean is bringing us this season of Drama Special with English subs.
http://www.ondemandkorea.com/2016-kbs-drama-special-e8.html
It is a wonderful LEGAL resource for Korean Entertainment, and lots of it with English subs.

"Funny Woman" is on Viki with English subs. It was filed under the "Romantic Comedy Drama Specials Part 1." There are other drama specials filed in different categories if you search "drama special" in the Viki search bar. Viki organized the drama specials weirdly.

Here is the link.
https://www.viki.com/tv/29726c-romantic-comedy-drama-specials-part-1

It should be episodes 1 and 2.

interesting!! will look forward to this!

Err... do they need extras??? Coz my friends and I stay in Itaewon. I can show them around ^^

What a cool idea!

YES! YES! YES! So no more waiting for English subs to be uploaded. I welcome this wholeheartedly. N Kim Ji Hoon!! If only my teachers at school were this cute, I would have become multi-linguistic! Hurray.. Ahn hyanghaseyo ssem!!! (I really dunno if this is even right but I heard the word for teacher in Sassy Go Go and the dramas School. If it is not, then all the more reason to welcome Kim Ji Hoon :-P)

ooo! I might like this. There are Japanese versions that were done very well. Here's to hoping they incorporate folks who are non Korean that speak Korean fluently.