The odd roommates and seductive chicken shop owner of The Goblin 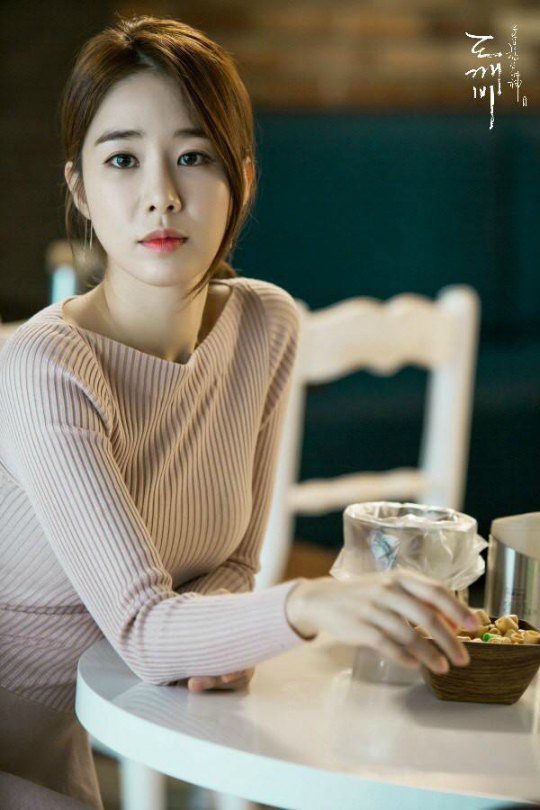 The Lonely, Shining Goblin is the story of a goblin desperately seeking to end his immortality by finding himself a mortal bride, and his strange roommate situation with an amnesiac reaper. Kim Go-eun (Cheese in the Trap) plays Ji Eun-tak, the scrappy high-schooler with the fate of someone who should have died, claiming to be exactly who the goblin is looking for. Yook Sung-jae (Secret: Village of Achiara) stars as Yoo Deok-hwa, the chaebol heir whose family has been looking after the goblin for countless years.

As with all the stills that have been released thus far for Goblin, these aren’t the most telling of photos, although they do continue to show us that the cast is attractive, which frankly, we are well aware of already. No complaints on the pretty though.

Yoo Inna looks quite chic as the owner of a chicken shop called Pure Sexy. It’s an interesting name for a chicken shop, but if pure and sexy is the theme of the restaurant, then Yoo Inna is dressed perfectly. I’m not sure what pure and sexy has to do with chicken, but consider me intrigued.

In their first encounter, Lee Dong-wook the amnesiac reaper appears lost and concerned as he looks to Gong Yoo the goblin for answers. But the goblin seems visibly thrown, either by the reaper’s presence or some other matter. Perhaps this is how the goblin decides to take the reaper in. Refusing to help the guy with the sad puppy dog eyes and memory loss probably seems like the wrong way to go about things.

Written and directed by the team behind Descended From the Sun, tvN’s new fantasy drama The Lonely, Shining Goblin will air on Fridays and Saturdays beginning December 2 after The K2 ends its run. 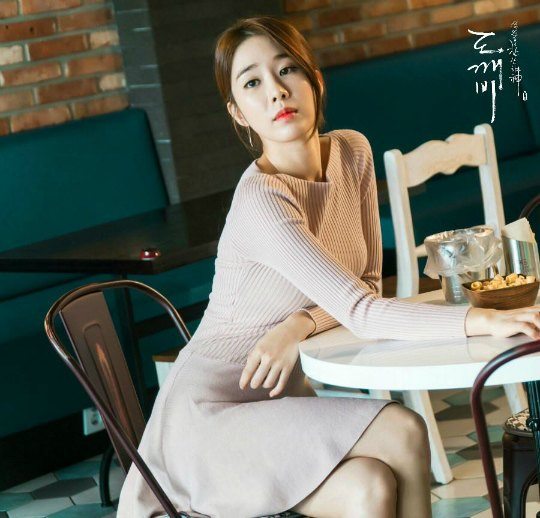 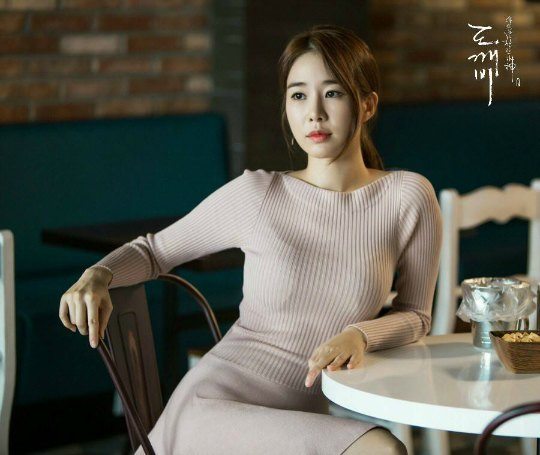 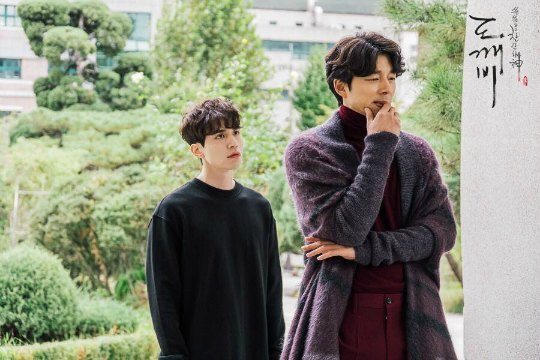 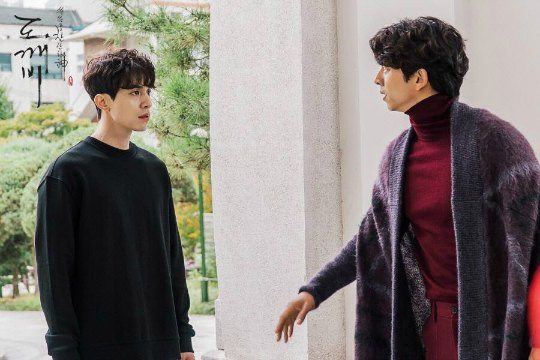 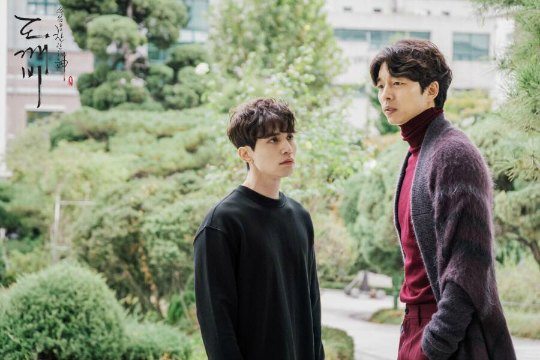 And this secusive goddess will go after amnesiac Lee Dong Wook the grim reaper lol. I wonder if he's start to love chicken or only the owner...

I still can't help but laugh at the title haha I bet there's gonna be so much Chicken PPL I might need to get some KFC before I watch each episode.

Maybe both grim reaper and goblin will have a addiction for friend chicken ahh who knows.

Haha that was my number one concern about watching this drama too- Chicken cravings :')

Goblin is my enemy. I will eat Goblin.

I read somewhere that Inna's character is a con artist?

be good drama!! this is Gong Yoo's comeback to the small screen after 4 years so you better be good is all I'm saying!! only 3 weeks left of wait!! :D

He really needs something good to make us forget the BIG mess of a drama.

I'm excited for the reaper more than the goblin

You're not alone, not alone...

I know! Right? I feel like he would easy lead me to my death because I can't resist those puppy eyes.

Me too! Lee Dong Wook.. puppy eyes.. and not to forgotten, his famous smirk!!

I'm in! LDW with those bangs look so damn hot!

Is it a sin that i am more excited by the second leads romance than the first?! More screentime please for the two. It will be hella cute!! Love them both!! ??

Not at all!!
Smitten by second lead syndrome & sunny-reaper loveline

Excited for the bromance (roommates??)!

Please KES make it a good drama for gong yoo it's his first drama since big ?

Will the reaper be the new Louie and follow the Goblin around while being conned,will Maxim have a hand in their destiny or will the evil Subway(who wants to take over dramaworld) will block their way to mortality and ugly hats?

I'd take Sad Puppy Eyes Lee Dong Wook too if he come knocking my door!

Is it strange that I'm much more interested in amnesiac reaper than the lonely, shining goblin? The reaper just looks so sad and he's amnesiac too!

So I need to stand behind both of you to.. well at least to hug our amnesiac sexy grim reaper. LOL

idk why I imagined a lot of things with the 2 guys picture,
look at that snuggly and comfortable clothes for winter . . . .

Can't wait!!! I love all the actors in this drama. I watch all the dramas these 4 are in. Gong yoo is why I got into watching korean. Love, love, love him.

LOL! To be honest, I can't think of a better way to attract customers. Opening day was definitely busy for her.

Drama, you've got me on board. Can't wait for Lee Dong Wook and Yoo In Na romance. That should be something fresh. Writer, don't fail

Every time I hear the plot to this drama, I just imagine some zany crazy hijinks and hilarity... yet all the posters and teasers suggest something more melancholy.

I love Gong Yoo & Kim Go Eun but God, Lee Dong Wook and Yoo Inna will make a very gorgeous couple??? if only the good thing about this writer is she manage to make to different love line and likeable second leads. Who are with me to have another Second Leads Syndrome?

Meeeee!!!! The sexy grim reaper with the sunny seductress. Wookie & In Na will sizzle all the way

I'm excited for the second leads story as well because that's what the writer is good at so I don't havr to worry of a bitchy second lead female since she already has a man.

"seductive chicken shop owner" LOL, that is a bit eye-catching though. Wonder if Yoo Inna has some secret motives/side jobs.

And omg! Sad Lee Dong-Wook looks so cute. ;A; Yoo Inna and LDW look like they will be a beautiful couple. *o* I sorta watch to watch this drama just for them. Gahh.

what a choice for lee dong wook. he must decide to choose between the seductive chicken shop owner or the pure sexy chicken

I can smell the cheesy lines from here...

Y'know, I always pictured Yoo In-na's chicken shop owner character to have a similar appearance as her One More Happy Ending character--frizzy hair, frumpy and... an apron? I just had an image, okay? Also, I thought of Ra Mi-ran's chicken shop owner character in The Gentlemen of Wolgyesu Tailor Shop, which is what came to mind when I read about Sunny the chicken shop owner. Based on the stills and BTS vids, the drama's concept of a chicken "shop" is much more fancier than I imagined and I don't know what to expect anymore... I mean, the character descriptions and premise is different, yet intriguing, but also slightly difficult to imagine how the story's gonna play out. I'm so glad December 2nd is nearing!

If only I could at least look half as good in turtlenecks as Gong Yoo... I mean, look at him!! How can he pull off not showing any abs (or any skin for that matter) and STILL be hot?

There has to be more than one grim reaper in action right?? I mean one is out of commission as he is currently AWOL with amnesia and around a seductive chicken shop owner so somebody has to fill in. I mean it has to be chaos for upper management when that happens without no backup. But boy the requirements for job application for the reaper has to have something like this included, "6 feet tall, milky flawless skin, plump pink and very kissable lips with great babysitting skills"
My weird inner monologue aside, I can't wait for this.

Babysitting skills lol can't stop laughing. Grim Reaper babysitting another Daeback and Twins. But gosh that would be so refreshing

How to do his job is the only thing he remembers. A Grim Reaper with no social life is probably the Underworld's best employee.

And may I add very competitive when in RM.
A perfect man!!!

I hope this drama will be better-written than DOTS... I'm certain it'll look pretty (it already does), and ive been waiting to be wowed again by Gong Yoo (after Coffee Shop), so...fingers are crossed!

Ha! The way the pictures are organized, it looks like Gong Yoo was caught gawking at Yoo Inna, and then is getting lectured about it by Lee Dong Wook!

I'm loving the dress on Yoo In Na; she looks so confident!
I'm really curious about this show and it's story.

So is Lee Dong Wook really short? Or is Gong Yoo really tall?

Or is it just the way it was shot? Maybe they're on steps and Gong Yoo's on a higher one?

These are questions that plague me. :)

Dong Wook is most likely standing on the stairs since as far as I know he's a bit taller then Gong Yoo.

she and lee dong wook look so good *o*

"Pure and Sexy..." I'm revelling in the hilarity, while just as intrigued as you, chicachunga!