Funny first winks in Tomorrow With You teasers 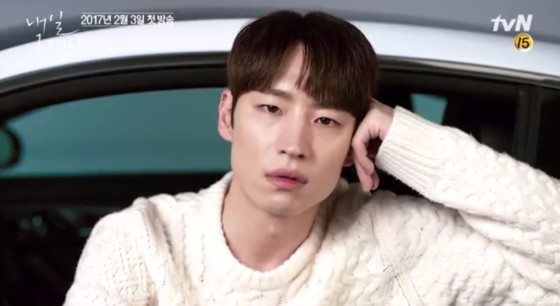 The official air date and new teasers for time-travel drama Tomorrow With You have been released. Starring Lee Je-hoon (Signal) and Shin Mina (Oh My Venus), this upcoming tvN drama is an opposites-attract love story with some fantasy elements thrown in. Lee Je-hoon plays a wealthy, attractive, and charming time-traveler who marries a bright and optimistic Shin Mina within three months of their first meeting. Contrary to the picturesque, melo feeling of the first poster, the recently released teasers give off PD Yoo Je-won’s trademark comedic vibe, similar in tone to High School King of Savvy.

The first teaser rewinds time as a shredded jumble of scraps goes back through the shredder to form the original paper containing Shin Mina and Lee Je-hoon’s character profiles, which say that he’s a time-traveler and successful CEO who got rich overnight, while she’s an endlessly optimistic woman who learned romance from books. At the end, Lee’s voice declares that he will change his wife’s fate.

We get a better look at the two characters in the second introductory teaser, where they show their first reactions to each other. Initially, Shin Mina adjusts her makeup in elegant silhouette, and Lee Je-hoon says in voiceover: “In the future, I marry this woman.” Suddenly the lights turn and she turns to camera, sending an absurdly over-exaggerated wink in our direction. Lee Je-hoon lets out a sigh, and his voiceover changes to: “In the future, I marry this idiotic woman.”

In Shin Mina’s turn to look at Lee Je-hoon, he’s a shadowy figure sitting inside the outline of a luxurious sports car. She says in voiceover: “I married a time-traveler.” But when the lights turn on, he’s caught excitedly filling out the winning numbers on a handful of lottery tickets. She shakes her head in response, and her voiceover changes to: “I married a rich-overnight time-traveler.”

Even without the gift of time travel, after seeing the funny reversals in these teasers, I predict more hilarious marital hijinks in the future of fantasy romance Tomorrow With You. The tvN drama will be broadcast on Fridays and Saturdays beginning February 3, after The Lonely Shining Goblin ends. 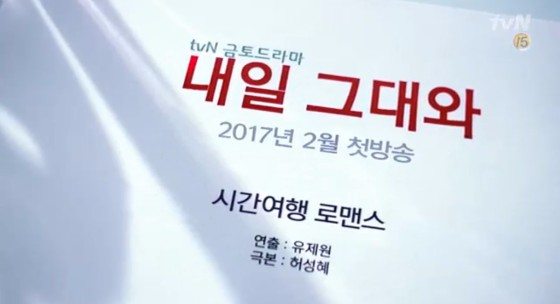 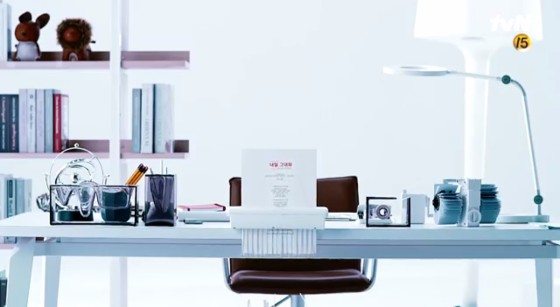 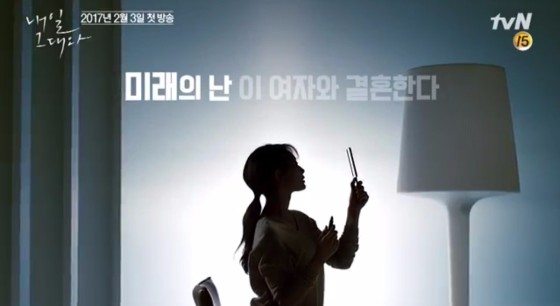 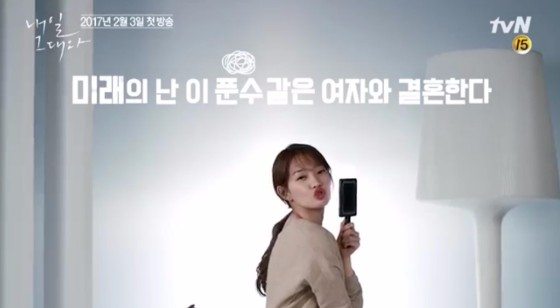 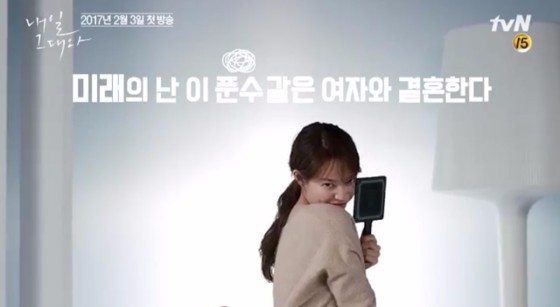 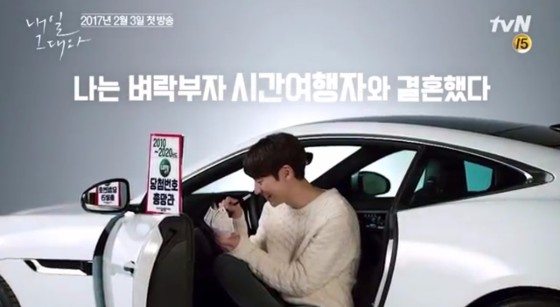 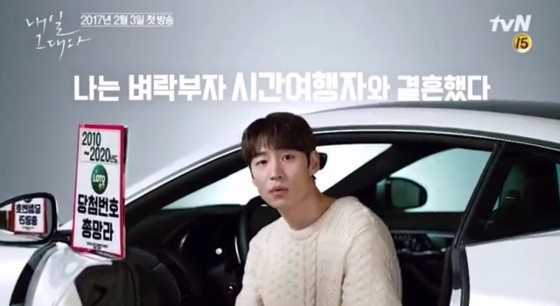 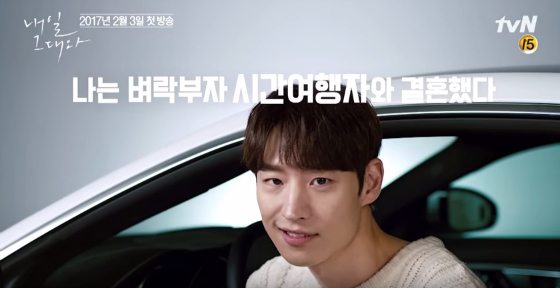 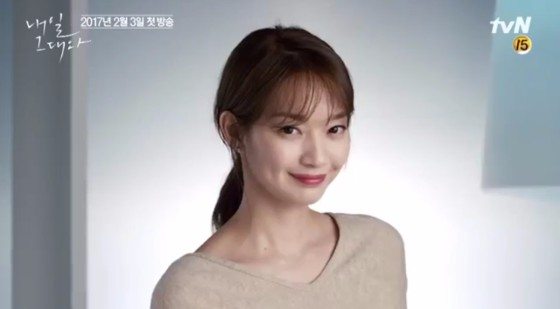 Idiotic woman and rich man? Though it might be according to the shows story but do we call that chauvinism?

The English translation does feel off. I think the humorous touch got lost in translation.

yeah it's not that intense as "idiotic" and it could be more that's flighty or frivolous. hard to say. but in his case he's rich cuz of gaming the system using his time travel powers. she was hardly complimenting him. and idk if he'll be a rich cold asshole or not. from the teasers it seems more cocky/arrogant than anything else. plus her chara will prob be more fun/playful than embarrassingly dumb and lacking in self respect. the last heroine this writer wrote i liked alot so i have hopes.
but now im wondering who translated these? not saying it's wrong, just kinda awk sounding but some stuff is rly hard to translate. so no shade.

It's like relying on lotto tickets isn't the most idiotic. Humour.

Lol, I dunno the "rich-overnight" part sounded like a jab to me. Like she was calling him bougie.

These two in one drama is a nightmare, ow can you ever look away.

Haha... Lee Je Hoon seemed to be now stucked with time travel concept drama becos of Signal. Hope that his next drama would be Signal 2 !! Anyway this drama looks promising, so it's a fantasy rom-com ?

I am not really excited, I mean I really do adore Shin Min-ah but I never loved one drama she starred in. It is like she always pick dramas that I can't love, dont know why...

Anyway, I still want to hope...especially because want to watch Je-hoon again before Signal 2!!!

Nine Tail Fox ? No. Arang and the Magistrate ? I loved it at the start but around the middle I just dropped it...

She was good in Arang and also the Gumiho. I truly enjoyed them, in my pov.

Wow, I'm excited for this because of Lee Je Hoon, but the moment I saw Shin Mind Ah in that teaser, with her smiling face, I go WOW. She's ethereal.

But still, moarr of LJH!

How can this woman be so perfect? I love everything she's in.

Same here, I like Shin Min-ah but aside from her role in The Devil I haven't liked her in any other drama since. I think she could do well in a more serious role than these rom-coms shes been choosing lately.

I've heard that her movie choices are more interesting though I've only watched Naked Kitchen and excerpts of My Love My Bride.

But there are others like Han Gonju with Park Hae Il and others.

I like both of them, they are so cute, though....what's up with Lee je hoon's hair!? Maybe I got used to his Signal hairstyle.

TBH i thought his hair was super cute in Signal

Ahh, that smirk and then wink from Lee Je Hoon! ?

Very excited for this!

Winter and Lee Jae Hoon is the best deal!!!After a year and a bit he will be right back!!!I bet they will look amazing!!!I know the teasers are very light and adorable but i'm preparing myself for teh angs as i remember the early description,it had quite the intresting and maybe even bit dark part about the hero intentions in marrying her

I love them already.

I can't help but wonder how much "Subway" are we going to see in this show. Those time traveling special effects must be expensive...

More PPL on the way. Btw I just saw one in my local drama whereby the lead guy was moving the expensive mattress (showed the brand name at the side of it) n bouncing up n down on it thereafter and said "wow, this is a really good mattress!!" and then his grandma told him "yeah your filial uncle bought it for me."

So on the end of jan Goblin ends? That's hard to digest. The withdrawal syndrome for goblin is going to be severe for me. Sorry for spamming this thread. On aside, I love this pair, just hesitating a bit, since all anticipations regarding 'fate' doesn't end on a good note. Look at goblin for example.?

I thought i would be excited.. But not really. And i dont really heart hid hairstyle.. Looks like the bangs i cut myself for my baby boy

Ah I'm not ready for Goblin to be over! But I'm so ready for this drama!!

I will probably check this out just to see what it is like. But his hair tho...

i hope this would gives groundhog day vibes

When I heard that they were going to be married, I was excited to see a drama start off with a couple in an already established relationship. 3 months doesn't exactly sound like that... but I guess it's still more than most couples start off with.

What I wanna know is why they marry each other. Because if the teasers are anything to go by, they clearly aren't impressed with one another. I know it's been stated that he marries her in order to avoid "an unhappy fate" that he sees in the future, but I'm curious to know how exactly he thinks marrying a woman he doesn't love is gonna fix that. And what about her? Does she simply do it for the $$$. Does she have any other incentive to do so?

I hope the next teasers/trailer show off some of the more timey-wimey aspects of the show.

Me am here for the 'Savage Romance'. What in God's name, does that mean?

"Sweet and Savage" romance to be more exact. Like whut? ?

callie, u are making me curious about everything, my hend hurt.. why they get married????????

SO EXCITED!!! love both the leads omg really excited to see how the chemistry turns out ❤️❤️

For once that I like both leads.. I'll definitely check it out!