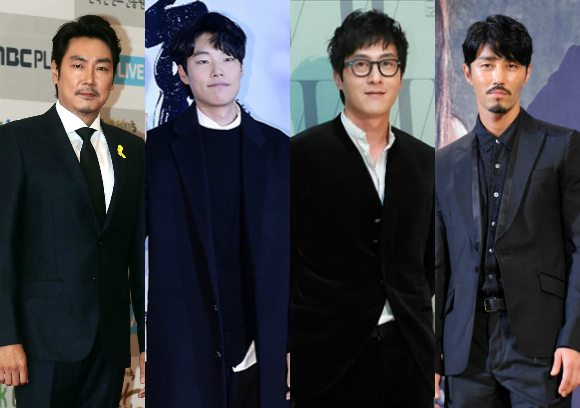 The aje fatale (aka ajusshi fatale) is in full force for upcoming crime thriller Onward. Early on, Jo Jin-woong (Entourage) was courted to play the main lead as an undercover police officer. Next, Cha Seung-won (Gosanja: Map of the World) was offered the opposing role, of the criminal kingpin that Jo Jin-woong tries to catch. Recent reports added that both Ryu Joon-yeol (Lucky Romance) and Kim Joo-hyuk (Yourself and Yours, The Truth Beneath) are in final negotiations to join the project.

So the plot sounds like a mishmash of Heartless City and Signal (well, the Signal part only because Jo Jin-woong will be playing a policeman again): a cop goes undercover to infiltrate a dangerous narcotics smuggling operation, headed by the most infamous druglord. The movie is supposed to be a remake of the popular 2012 Hong Kong film Drug War, but it’s not clear yet how closely it will resemble the original. It’s been announced that Ryu Joon-yeol’s character will be a drug dealer, while Kim Joo-hyuk’s character is unspecified so far.

If this cast comes together, there’s no way I won’t watch — domestic viewing restrictions can’t hold a candle to the power of my love for hot ajusshis. Onward will be led by award-winning director Lee Hae-young, who created works like chilling horror movie The Silence and comedy Like a Virgin, and produced by the Yong Film Company, which has hit movies like The Handmaiden and Luck-Key under its belt.

Filming for Onward will begin next year in June (partially because Jo Jin-woong and Ryu Joon-yeol both have a ton on their schedules before then), so hopefully we’ll see the movie by 2018.

Whaaa what a stellar cast! I want to hog all the ahjussi just for my self. Well Ryu Jun yeol isnt ahjussi yet but there is place available for desert xD

I cracked up with ahjussi and dessert ?. Well for me he's already an ahjussi (cute ahjussi). I'm a new fan of him after watching Lucky Romance.

This is an excellent cast if all will confirm. Jo Jin Wong and Cha Seung Won are both my fave

Oh, let's not call RJY an ahjusshi just yet! That would make me an ahjumma, and I'm not ready for that title just yet. T_T

Well RJY is only in his 30s, I don't consider guys or girls in their 30s as ahjussi or ahjumma. When their on their 40s then I guess we can already call Ahjussi.

YES... we need more hot ajusshis! Most of my loves make me feel like an old lady, but not this cast! Plus I'm going to watch Ryu Joon Yeol in pretty much anything.

I stopped reading after "hot ajusshi cast" and "ajusshi fatale" ;)

Yes we need more fabulous 40s in the mix.

Paging a Man Called God... Is Song Il-kook in the building?

Where in God's name is that man?? Cheesy as it was, I loved that drama and Song Il Gook was sexy af!!!!!

dont worry, movie filming schedule is not everyday ..though it can be from dawn to dawn.
RJY also has 3 movies on hand already...
Silence, Little forest and this one (in case he's confirmed).

Yes I can't wait for that Ryu Rain of upcoming movies! So proud! And the cast line up so far respectively for all...incredible! Hope he continues to learn from them and gain/soak up all that experience for him to continue to grow into a even better, respected actor!

On another note: Love the Reply 1988 connection w/ him and Kim Joo Hyuk for this one. I even wonder what a intro might be like. KJH: Hey,how have you been? Haven't seen you since the 90s when we were in our "20s"! ~kekekeke?

It's crazy how many projects Ryu Jun-yeol is going to be in. Not that I complain, I pretty much watch everything he's in. Hope he can fit a drama to his schedule maybe in 2018? Please stay healthy!

Chungmuro is on fire with all the biggest & promising films to be aired and shoot in 2017.

Dang! I'm definitely gonna watch with this cast if they all sign on. Love the roles and premise already, and with the amount of talent, it's a must-watch.

Ryu Jun-yeol is on the roll! I'm a little sad that he's choosing movies instead of dramas but I think it's a good path. He could become those Chungmuro actors in the future and do dramas once in a while xD

Jo Jin Woong as a policeman? AGAAAIIIN??!!!
well ladiieees count me in? And whaat is thaaat? cha who? Cha FREAKING Seung HOT Won??? OH MY GOOD? with Ryu Joon Yeol??
Now ladies that what i call guiltyy pleasuuuree....

Am I the only one taking it hard to imagine Joon Yeol as a drug-lord? But hey I need him in some dark action genre so I'm just taking whatever he's in,

On the side note, the ahjae line is super gorgeous, I just can't wait <3

wait the King (premier in Jan 18).
He's a ganster and evil friend of JIS...dont hope a sweetie pie Junghwan nor suho in Choi Dooil character

be still my heart...
This is GREAT news! Love all the cast, including Y and KJH - please say yes already.

Iam so proud...RJY got offer and offer here and there means that he's in a high demand from the movie company and PD.

And with this another of Chungmoro mosnter....way to go ahjussi

wow Ryu Joon Yeol is pretty much in every movie in 2017. not that I'm complaining!

I think RJY will keep running on the big screen. Good for him. I want to watch him being villain. *smirk*

Let there be no doubt, there's always room in the viewing schedule for the ajusshis!

wow RJY is on the roll! And I am loving all the actors he will be working with. :)

I've been an avid fan of RJY since Answer Me 1988, Jo Jinwoong absolutely killed it in Signal, and I loved Cha Seungwon as Chajumma in Three Meals A Day!

Ryu Joonyeol is not an ahjussi, though.

ah it turns out that this is an old post :D i was startled, too, for a second, though!