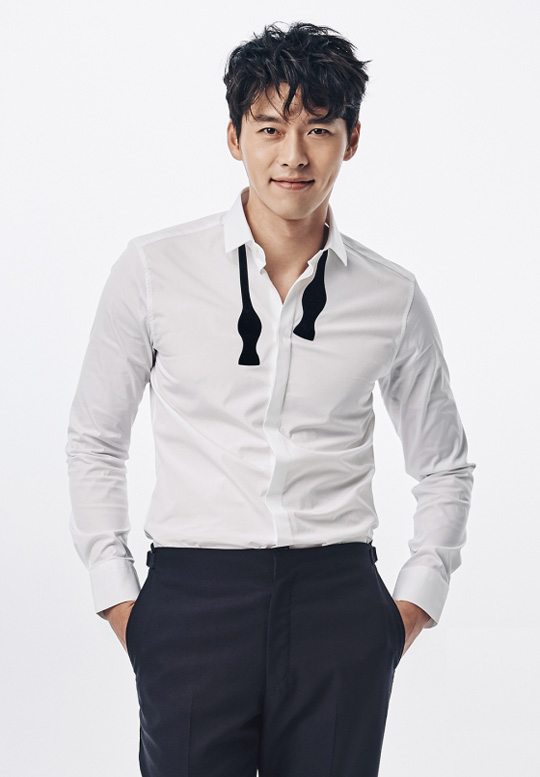 We just heard about this new sci-fi drama project a couple days ago, titled City of Stars and to be helmed by director Jang Jin (We Are Brothers, Quiz King, Good Morning President), and already there’s talk of Hyun Bin (Hyde, Jekyll, Me) being approached to headline the blockbuster series. *attention dials suddenly at 11*

Hyun Bin has been offered the lead in dramaland’s first foray into outer-space-themed material; City of Stars, which will be Jang Jin’s first time directing a drama series (though he has plenty of experience in film), follows two men who’ve grown up dreaming of going into space. They are both chosen for an astronaut training program for a mission to seek out Helium-3; the need for alternative energy sources is pressing in a future where the earth’s supplies have dwindled. The story will incorporate elements of international espionage and battle between intelligence agencies as nations fight amongst themselves, driven by greed and self-interest.

The role Hyun Bin has been offered is a former pilot in the air force and aircraft mechanic, Yoo Dong-ha. Although he is considered a top pilot in the military, a flight accident from his air force days has left him with some sort of trauma.

Hyun Bin has been focusing on his film career in recent years; his last drama, 2015’s multiple-personalities rom-com Hyde, Jekyll, Me was not such a hot spot in his career, but he has a couple films lined up for the near future: action movie Alliance is set to release in January, with Con Man to come later in the year. City of Stars is planning to be entirely pre-produced and begins shooting next May. The project is currently in scheduling talks and looking to secure its cast.

i really miss him in dramaland....

This sounds so cool! Please be better than the mess that was Hyde please Hyun bin I miss you in a good drama.......

Damn, this is gonna be a blockbuster of a drama.

And Kang Sora as the leading lady *wink wink*

Ohhhh that'd be great but I doubt it will happen...

Well hey, we can hope. She needs a good show too and we know they'd have great chemistry!

??? This wouldn't be a bad project for him to take, though. Jang Jin is pretty great.

I didn't say it was bad or good. Jang Jin is not Bong Joon-ho when it comes to sci-fi.

It takes a long time to get a movie career going. I just wish he'd stick with it.

I'd say he's pretty settled in his career. If HJM didn't ruin it, this certainly won't.

I'm mainly talking about his movie career. Just because he is a big name in drama land doesn't mean he is also a big name in Chungmuro.

I don't think Han Ji-min ruined anything for him. That's unfair to put the blame on her.

Hj&m just have 3 personality when kmhm have 7personality .kmhm story more interesting (imo) than hj&m .of course it isnt her fault,from the story we already know which is better

Lol to kiara, I think peach meant HjM as in Hyde jekyll me

You people and your abbreviation *sigh*.

I don't know. I think Jang Jin's films are pretty uneven in terms of quality, but he is from Chungmuro and has done good works before. Also, Hyun Bin gave his best performance in "Friend, Our Legend" which was done by Kwak Kyung-taek, who is also pretty uneven and from Chungmuro. That one was produced under similar circumstances this one will be (pre-produced + movie director) and it was great, but it flopped in the ratings. This drama sounds risky and Jang Jin doing sci-fi sounds weird, but at least it is helmed by someone who mostly does movies so it could be promising for him.

Exactly, I don't know about this. It could be good or bad. Not everyone can do sci-fi just like sageuk.

Totally. The premise sounds promising though astronaut theme always is boring (except "Gravity"). What worries me is that the setting is good on paper but I have no confidence when comes to execution.

I agree and that's why I prefer this genre on the big screen. 2hrs is long enough for me.
I enjoyed Gravity, Apollo 13 and Interstellar (Nolan fangirl).

Sorry for being sceptical. An astronaut in science fiction theme? If the average korean drama has 16 episodes, isn't it going to be very expensive? Will there be any investor or broadcast station that going to be interested? If HBO said going to produce it i'm going to believe since they got much experience for expensive setting and their scale much different. But if it korean broadcasting, i wonder it will be extravagant and up looking cheap or being average romance story...

Oops i mean i doubt its going to be extravagant and end up looking cheap or become average romance story..

I agree, plus I still feel uncomfortable with this writer on board, he is great in movies but writing drama is totally different.

While I enjoy the idea, it sounds so impossible for me - I'm thinking the budget Moon Lovers had times a million or something would be needed for this to be remotely good…also the word "pre-produced" causes me to shudder.

I think I have Moon Lovers PTSD *gulp*.

And can we have no heartbreak this time???
The premise seemed cool but so risky for not being able to take off

I haven't seen him since Secret Garden, so I really hope to see him in dramaland soon! I forgot how gorgeous this man is until I watched his Entertainment Weekly interview of his latest film, Cooperation. He's ageing like fine wine - he's got more meat now, looks much healthier, and the moment his dimple appeared when he smiled, I was a goner.

Is there a spell somewhere to switch my body with Kang So Ra's?

Seriously.
I just watched him in The Fatal Encounter and he even managed to make the obligatory weird sageuk king beard look good.

But to make a 16 episode drama on outer space will be so expensive. Unless they have a HUGE bugdet, I dont see this working well.

Audiences nowadays are not really to settle with a cheap-looking set for such a good sci-fi genre.

But space genres in general are boring to drag out for 16 hours....

I really hope Hyun Bin will reject this and come back with a more conventional drama. I dont want him to flop and have a trauma with dramaland again.

The plot feels a little bit of Interstellar movie...with James Bond intrigue hehehehhe...but love to see him back on small screen since I choose to passed Hyde, Jekkyl and Me....

The plot reminded me with Hollywood movie called Gattaca with Etham Hawke and Jude Law as the main lead. So after Hyun Bin, I think we need another handsome actor as his opponent

YES PLEASE!!!!!!!!!!!!!!!!!!!!!!!!!!! I love science fiction (even more than Kdramas). And Hyun Bin, despite not doing anything I liked watching for a while, is still one of my great acting loves AND is one of the best actors working today. Let this drama work, and please let him be in it. It sounds terribly ambitious. But I think if W showed us anything it's that an ambitious and unique drama, even if it only succeeds about 50% can still be better than all the common fare out there.

I have a feeling they will soon decide to make it a movie. A space themed drama can be too long and too expensive. The movie format suits this genre the best and I think the director will realise this soon.

The space genre can work on television too! See : Star Trek, Battlestar Galactica or the more recent and low buget like Killjoy. There's even space themed Jdrama : Space Brothers. It's not about the high production, it's about the story. Audience can forgive bad special effect as long as the story is good.

Accepting a drama role is a roll of the dice in terms of the writing and the reception it gets from the local audience. I understand why some actors focus more on movies, but I hope if he takes it this ends up being a solid production with respectable ratings so it won't be years before we see him again in dramaland. I'm not a HB fangirl, but I have the utmost respect for him in that he gave it his all in HJ&I til the very end. I think HJM gets a bad rap...it's not her fault the story went the way it did but at some point, she just seemed to give up.

Before this was announced. When I heard the previous news. I had a feeling it most likely offers to Hyun Bin and Ha Ji Won. So far, my prediction is 50% correct. lol. I am crossing my finger, it will be also be offers to HJW now. They've great chemistry even if they're not dating. I doubt it will go to KSR since this is a big budget drama.

Hmm if dramaland could produce the korean version of Firefly, I would be extremely happy...that show ended too soon! I keep reading in these comments how outer space tv series are boring but Firefly did it right, but unfortunately only lasted one season. If you haven't seen Firefly, what are you waiting for? It is only 14 eps so like the equivalent of a k-drama plus a 2 hr movie for closure so 16 hours total commitment for one of the best sci-fi series ever produced.

Hyun Bin is my favorite and I hope he does choose to do a drama this year so I'll keep my hopes up.

Probably a stretch but it would be super interesting if this somehow referenced the film Moon(2009) starring Sam Rockwell and Kevin Spacey. Especially since in the film it seemed that the company that mined the Helium-3 on the moon was Korean.

Maybe just a dream but setting this story up to be a prequel of sorts to the aforementioned film especially since they seem to be running on similar themes!

If Japan can make a space drama, I'm sure Korea can too!
Judging from the description I think there will be more politics and astronaut training than really flying in space, so I'm sure they don't need a really high HBO type of budget. As long as the characters and story is written well, they don't need spectacle and special effect to impress the audience

Why is everyone criticizing HJM? I found the drama pretty good...