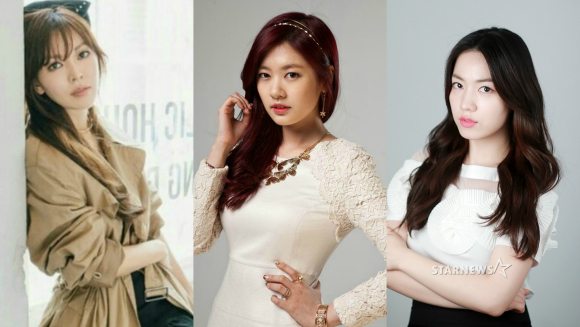 For the upcoming KBS comedic family drama Father is Strange, an earnest patriarch and his dedicated wife live in the outskirts of Seoul along with their one son and three marriageable daughters until one day, a Hallyu celebrity becomes a permanent resident in their home. The actresses to play the three daughters are, from eldest to youngest: Kim So-yeon (All’s Well With a Happy Home), Jung So-min (D-Day), and Ryu Hwa-young (Age of Youth).

Kim So-yeon and Jung So-min confirmed recently, and it’s only Ryu Hwa-young, up for the youngest sister’s role, who has yet to make a final decision. Kim So-yeon’s character is a beautiful, intelligent lawyer who radiates confidence. Mostly wrapped up in her own life, she doesn’t care to involve herself in family affairs, but does so when she is needed. Jung So-min plays the second sister, who, when compared to her successful siblings, is often found to be lacking. However, she possesses a strong spine, cheerful personality, and hearty appetite.

Ryu Hwa-young is considering the offer to play the family’s maknae. Her character is so glamorously attractive that she doesn’t remember a time when she didn’t have an on-call boyfriend. Her main flaw is that despite her gorgeous face and figure, she’s naively simple, which leads her to make reckless, scatterbrained decisions. I’ve seen Ryu Hwa-young in Ex-Girlfriend Club and Age of Youth, and she seems to have been typecast in the role of the curvaceous girl with more boobs than brains. I am hopeful that because Father is Strange is a longer drama, her character will become more nuanced, and she will have more opportunity to demonstrate her acting skills as the series progresses.

Other actors who have signed on to star in the cast include: Lee Joon (Woman With a Suitcase) as the self-absorbed Hallyu star, and Kim Young-chul (All’s Well With a Happy Home) and Kim Hae-sook (Yeah, That’s How It Is) as the parents of the central family. Father is Strange will begin broadcasting on KBS in February 2017, in the weekend slot currently occupied by Laurel Tree Tailors.

?? I wouldn't say Ryu's character in Age of Youth was boobs over brain. She was an intelligent, thoughtful character.

mte, she wasn't dumb at all.

ikr. her whole character arc was that people saw her that way so she got through life by being pretty and spending her older boyfriends' money... but she was unsatisfied with that and changed her whole life. maybe she's been typecast as sexy, or in general as the kind of character whose main character trait is how attractive she is but she's hardly a mindless bimbo

I agree. Her dumbness was mostly a facade she utilized to maintain her image of a glamorous actress. Personally I think she was the most honest, forthright, and the most admirable of the three ex-girlfriends.

umm, THIS LINEUP IS SO PERFECT IT'S KIND OF RIDICULOUS. I need this now.

never have i been this excited about a weekend drama

Lee Joon and Jung So Min's loveline between a egotistic star and agency employee sounds really cute (quite frankly, the dream of every fangirl, yea?).

Just praying that someone would make cuts of them! I have never been able to watch a family drama in its entirety.

Also her character in Age of Youth was far from a 'boobs over brains' type, she's been typecast as sexy but that isn't the same as playing a bimbo.

I know right! She is just typecasted as a sexy woman, but her characters from Ex Girlfriend Club to Age of Youth, all are different.

I hope she can get to act in a role as so not pretty / sexy woman, maybe playing a simple college student. Yes in the future.

damn it. now i have to check out the first episode at least. great casting.

love those girls I can't resist them. Am in.

How many episodes does this show have?

50 episodes, I know that's too long but I am still excited about this drama

Kang Unnie was definitely not 'boobs over brains'. But, wow, if all three sign up this would be the drama sisters dream team! I'd be forced to watch another weekend drama at this rate. I hope Hwayoung confirms!

Love, love all three of them. I love hearty family dramas. I find them extremely relatable.

Kang unnie is more than just boobs over brain. She was the most memorable in age of youth for me. And she is thoughtful too. I wish you could refrain from degrading her, or any female character/actress unless she/they deserves such denotations

yeah..i dont get where the "boobs over brain" come from. Kang unnie definetely not boobs over brain character. she's cynical and thoughtfull. yes,she exploited her older bf by her body and looks but she knew how talk good topic without being ridicoulous.

Her character is quite stand out with Han Yeri and Park eunbin's character..

I agree. There was a nuance to her performance,furthermore she is currently starring in golden pouch and boobs and sexy definitely is not the point.

Nooo the one in Golden Pouch is her twin sister :)

Kim Young-chul? Dang you drama land. Isn't there anything better for this talented veteran and his this cast?
Fingers and toes crossed. Please be good!

I love these threeeeee! All casts are great!

Rating success is quite guaranteed, since this going to on KBS. Just be good drama.

KBS is determine to continue it's reign over weekend dramas.
Kim So-yeon and Kim Sang-kyung would make a great pair. I'm not sure if I loved him because of his acting or because he played the beloved King Sejong lol.

I actually love all three of them and feel that they can do better than a family drama.

did anyone else think of Pride and Prejudice when they read the plot description?

Ryu Hwa Young and Lee Joon? I'd watch just to see them, but I just can't do family dramas.

This family dramas arent really my thing but I hope if RHY signs,this could give her a chance to show a range of emotions. I disagree on her been more boobs thanbrains in Age of Youth.. sge was clever and the smartest of the girls jusg that she preferred the 'easy life'