Twisted ambitions clash in posters and teaser for Rebel: Thief Who Stole the People 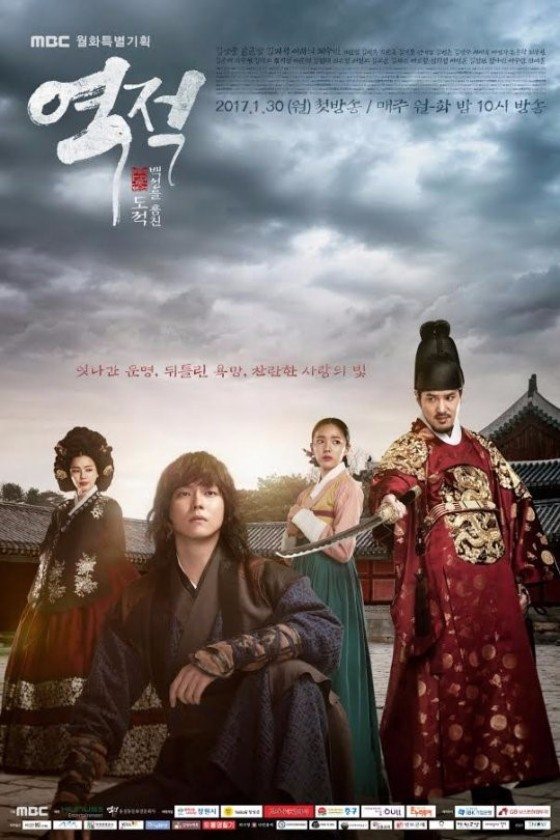 MBC’s upcoming Monday-Tuesday drama Rebel: Thief Who Stole the People has released its official posters and a new teaser. The new sageuk is a not a typical retelling of the famous Joseon legend about Hong Gil-dong; rather, it’s based on a true story of an insurgent who led a commoner’s rebellion against King Yeonsangun during his violent regime. Yoon Kyun-sang (Doctors) plays the rebel Hong Gil-dong, and Kim Ji-suk (Oh Hae-young Again) plays the bloodthirsty ruler.

Born the son of a common house slave, Hong Gil-dong grows up hiding his enormous strength until one day he realizes he must use his gifts to bring down the corrupt political power that is oppressing the Joseon people. In the third teaser for this drama, Kim Sang-joong (Jingbirok), who will be taking on the role of Hong Gil-dong’s father, narrates that Hong Gil-dong will become the people’s hero despite being remembered as a traitor, and King Yeonsangun will become a traitor to his people despite being born their sovereign.

In the middle of the teaser, it looks like Kim Sang-joong is sitting next to Seol Min-seok during his narration, and if that’s true, I’ll be doubly anticipating this show because I’m a complete fan of the internet-famous Korean history tutor. At the end of the teaser, a scene is shown of Kim Sang-joong splattered with blood and holding a sickle, while resolving to become a different person. His character synopsis has already been revealed as someone who will stop at nothing to ensure a better life with a higher social stature for his son, so maybe he’s even willing to consider murder?

I’m all for fusion historical dramas like Moonlight Drawn By Clouds and their meta references, but lately, I’ve felt nostalgic for the traditional sageuk genre, so I’m glad that Rebel is coming our way soon. The first group poster, showing King Yeonsangun holding a sword at Hong Gil-dong’s throat, says: “Fate gone astray, twisted ambitions, shining love’s light,” and looks especially like standard sageuk fare. But then the intense character posters invoke a sense of epic grandeur, which I’m excited for.

In his character poster, Yoon Kyun-sang aims an arrow while his copy reads: “May I steal the hearts of the people… this country…” His lover-to-be, played by Chae Soo-bin (Moonlight Drawn By Clouds), is tied to a wooden post in her poster, with the floating words “Everyone left except me. I… waited for you” beside her. The two actors have come a long way from two years ago, when they first met through shooting Uniqnote’s music video for Girlfriend. They were almost anonymous then, but have become trending stars through their respective hit dramas. Hopefully their sweet chemistry from the music video will carry through to this drama as well.

Honey Lee (Come Back, Ajusshi) is set to play a gisaeng-turned-concubine whose first love is Hong Gil-dong. But from her poster, it seems that she’s likely to change loyalties as long as it gains her more power, because it reads: “I want to make the king my man.” Perhaps jealous over his disloyal concubine or his rebelling people, Yeonsangun looks over his shoulder with a murderous gaze as his poster says: “Joseon is mine, a land only for Yeonsangun.” Finally, dressed in a slave’s clothing, Kim Sang-joong stares off into the distance as he thinks: “My life is in heaven’s hands.”

Rebel: Thief Who Stole the People will begin airing next Monday, January 30. 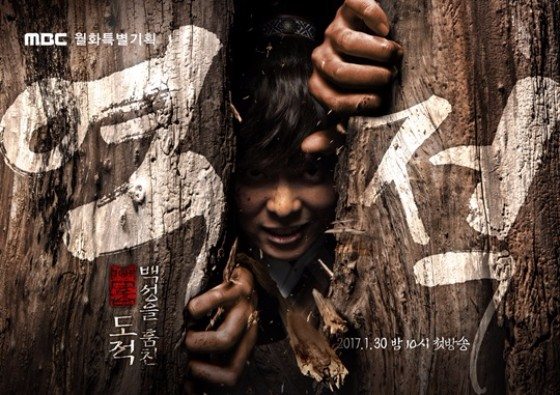 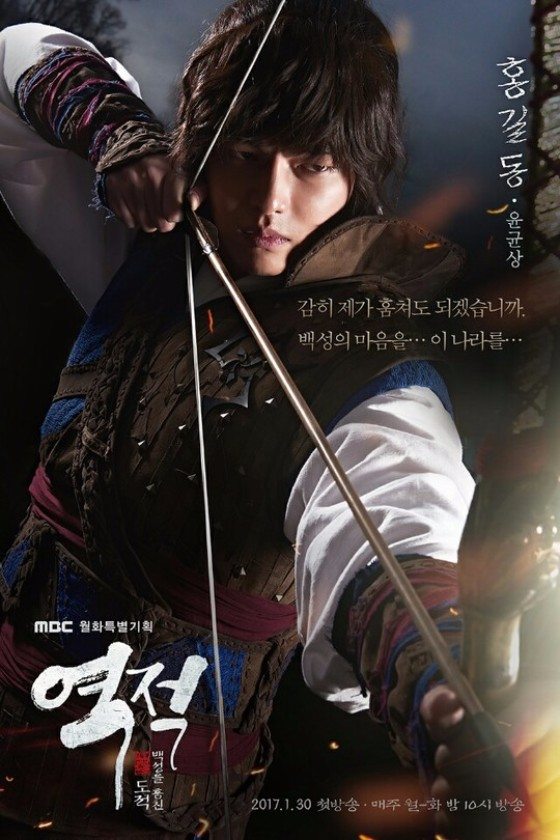 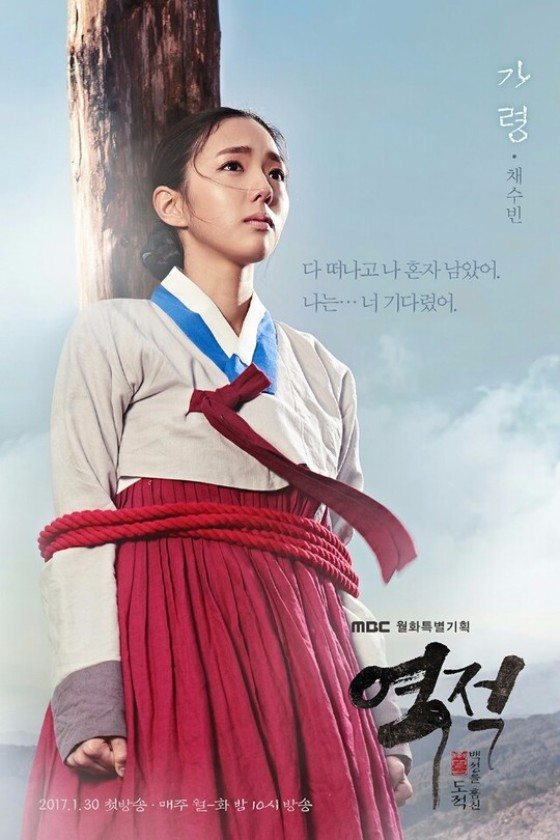 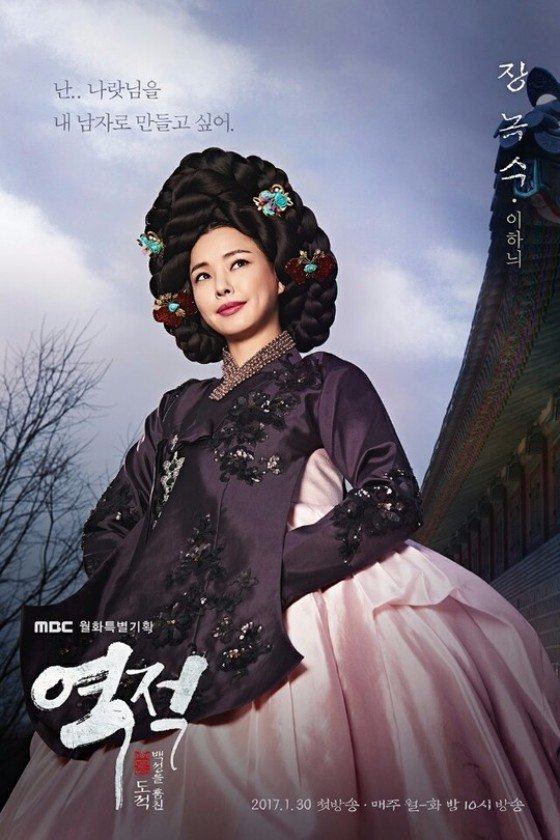 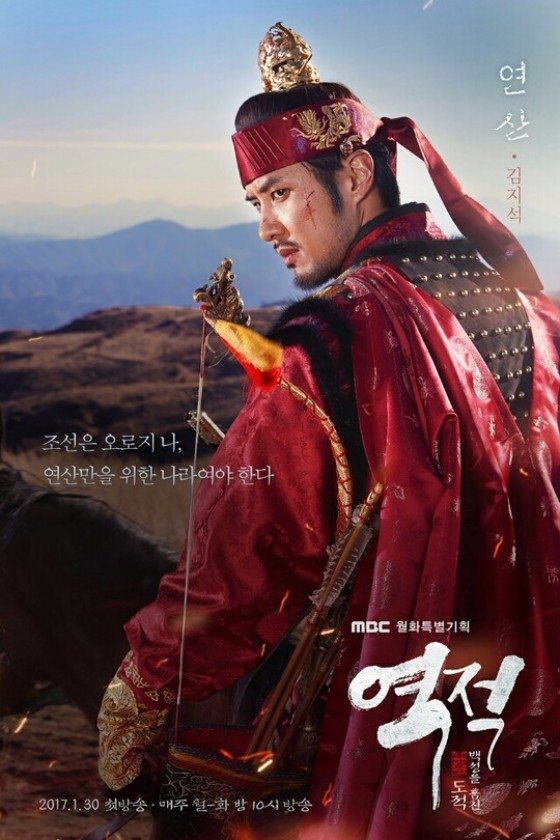 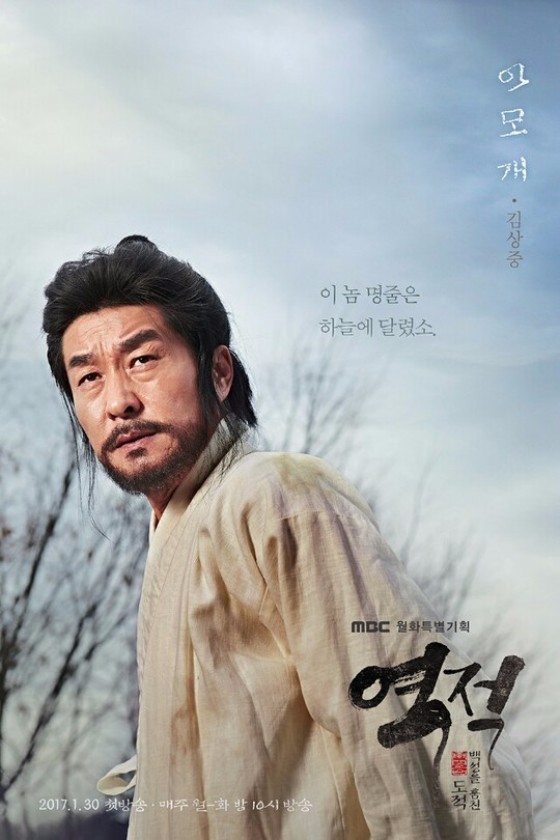 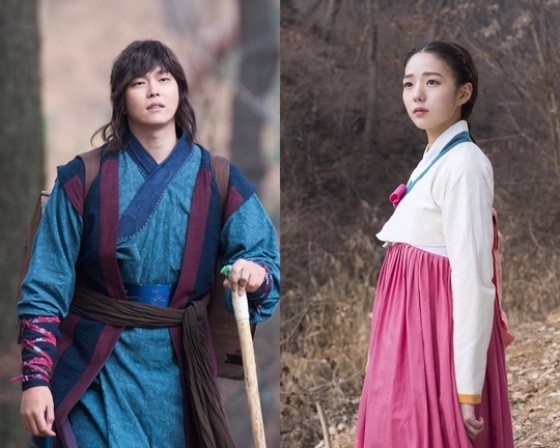 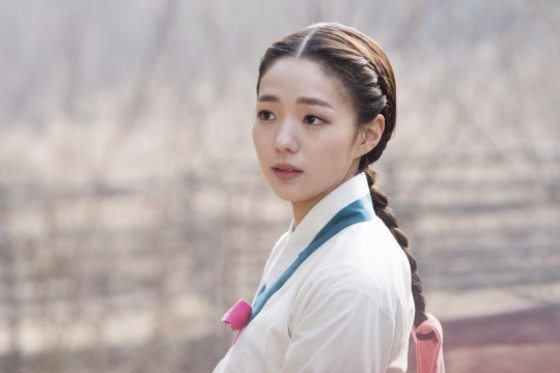 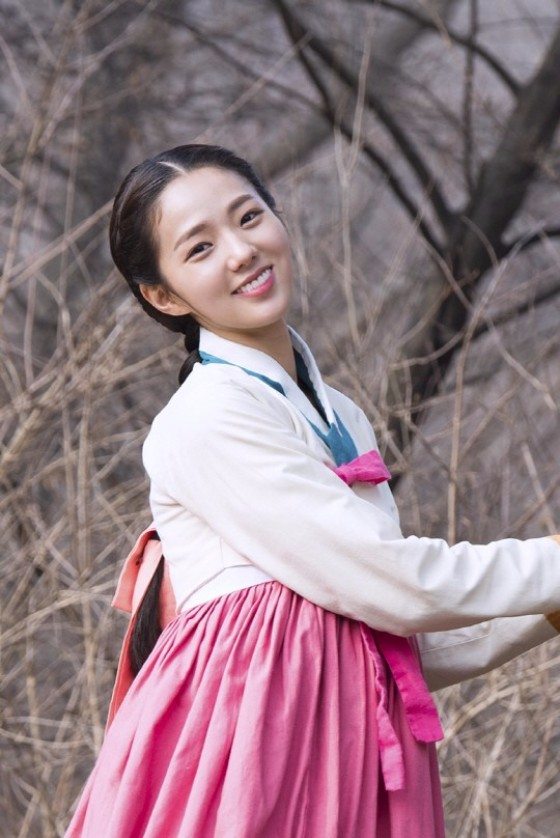 AHHHHH! Looking forward to this!!! Moo-Hyul is being reincarnated! :)

I've been waiting to see a superhero-esque kdrama again!

That girl kind of looked like Shin Se Kyung o_O

Lol true. There should be an edit button, it's high time now.

Why do I have the same feeling as you?

Please don't kill me, everyone.

I think I know why...Yeonsangun feels like one dimensional villain in this drama based on the trailers and posters.

Phew. I thought maybe I was a cartoonist villain.

And I thought I was replying to Tin girl. (I feel so inept.)

This drama will face a very strong competition of Hwarang and Defendant (Defendant started first epi with bang 14% something). I just wish this drama will not suffer like Night Light, but then Night Light deserves the numbers due to quite low quality (plot) imo. I am waiting for some serious sageuk so yes for this, and i just rewatched The Duo (which also about the thieves who steal from the rich to help the poor).

Please be good drama, i am rooting for you.

Sometimes it's even better at 2nd viewing. Writer Kim Woon-gyung and director Im Tae-woo should do a another sageuk for jTBC. They work well together. I'd watch the heck out of it.

Sadly there isn't one single sageuk that I look forward to. Just watching for the love of the genre and some of the sageuk actors in it.

I noticed that Ahn Nae-sang has a role in this show, hopefully not a cameo. Another reason to watch beside Kim Sang-joong and Honey Lee.

Yes agree. Sometimes I just prefer to re watch old sageuk rather than start the new one. I am waiting patiently for this and Saimdang, not that I expected too much, but i am just tired with romance / fusion sageuk headlined with too many new faces/ idols.

Yes I also just checked that Ahn Nae Sang will have a role, also some other familiar veterans for supporting roles.

Me too. In fact, my new year wish is more older actresses and actors for saeguk like the Princess man..

I'm tired of this trend too. I've been trying to find KBS's latest docudramas with subs but with no luck.

I missed the veteran sageuk actors to death and the young ones who grew up in the genre. When I see Ahn Nae-sang, Kim Sang-joong, Son Jong-hak etc it makes me want to check it out.
These current new faces in these fusions can't even get the simple things right. Most don't even try to speak in sageuk tone.

I feel so guilty because I don't feel like watching this drama even for my baby. Not that I have enough time to watch dramas anyway. I wish them all the best though.

This may not be the right post to ask, so please forgive me for that, but what is the difference between a fusion Sageuk and a regular Sageuk?

Fusion Sageuk is sort of a melding of modern day and old worlds with a fantasy romp into the old days, as opposed to a serious look at the history and a desire to stick to history as much as possible in a regular Sageuk. Perfect examples of Fusion Sageuk (people-please correct me if I'm wrong) are:
Moonlight Drawn by Clouds
Scarlet Heart: Moon Lovers Goryeo
Rooftop Prince
Queen In-hyun's Man
Sungkyunkwan Scandal
Hwarang...and many more

Regular Sageuks are devoid of fantasy elements or silly stuff and are usually grand and sweeping epics, for instance:
Queen Seon Duk
Jumong
The Kingdom of the Wind
Sword and Flower

Koreans are very proud and protective of their history so the majority of the population adores traditional Sageuks, although there have been great popular cross-overs like Empress Ki and Jewel in the Palace.

lunatic4kd - I really like fusion sageuks but I'm interested in trying more traditional ones. My only problem is that I can't stand a slow pace (my personal taste, I understand it's not a problem for many) and the few I've tried have moved too slow for me. I did really like Six Flying Dragons, though even that was slow in the middle but at least I finished it. Have you got any traditional sageuk recommendations for those of us that need a drama to move along?

Well, if you loved Six Flying Dragons, you should try watching dramas made by the same team ^^ You have Deep Rooted Tree, which follow historically SFD and Queen Seon duk ( my favourite of the universe in which you will recognize quite a bit of SFD actors) ^^ ANd it is fast paced !!

I think I was borned in the wrong era. I find sageuks the most fascinating genre ever. The older and more authentic the better. I feel like I missed out when it comes to the early years of sageuks. I can only read about "Jang Nok-su", "500 Years of Joseon Dynasty" featuring the original "Tree with Deep Root" etc.
When it comes to Korean history I barely scratch the surface but good enough to consider myself a sageuk fan (yay).

I think almost every sageuks since Dae Jang Geum (early 2000s) were fusions dressed in historical costumes. Even the 50+ eps sageuks like Queen Seon Deok, Six Flying Dragons, Jumong, Dong Yi, Empress Ki etc are considered fusions. They may have a historical foundation with characters carrying the name of real life historical figures but artistic license is used or overused to make it more appealing to the general viewers.
There are some with good amount of historical details in it like Hur Joon, (the highest rating sageuk of all time) Dae Jo Young (I think) etc.

Some fusion sageuks that I really enjoyed:

wow didnt noe they already met thru filming the mv

same! i'm so so excited and ready for this

Kim Ji Suk, in his best villain face, all you're mine and you're dead!

Yoon Kyun Sang, calm as you please, unperturbed by the sword on his neck, striking a Saeguk fashion model pose

Honey Lee, impressed by this young man whose there like Kim Ji Suk doesn't even exist, and showing off his neck instead for other, uhm, objects like tongue licking and teeth. Home girl be thinking, "Damn, I gotta get me some!!"

I will never, ever.... evvveeerrrr.... tire of seeing Chae Soo Bin in traditional dresses. Gosh. So pretty.

I saw Kim Ji Suk with his natural beard in Introverted Boss hahahaha he was in ye ji won's "family picture" in episode 4. Brings back Isadora x Jin Sang's loveline ?

So I guess this Hong Gi Dong is more of a serious toned drama then? I remember seeing watching the first few minutes of the older Hong Gi Dong and it seems like a comedy.