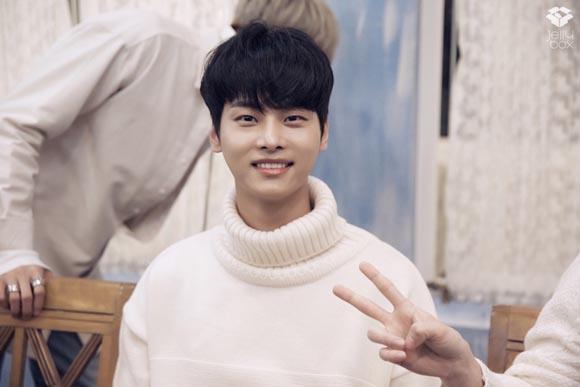 Vixx’s N (real name Cha Hak-yeon) is taking on another drama role, this time in OCN’s time-traveling mystery-crime drama Tunnel. And while I only know him from cheery high school drama Sassy Go Go, I saw enough of his spacey, oddball vibe to figure that he fits the bill for a character described as “mysterious” and “the key to the secret of a thirty-year time warp.”

That time warp refers to the central premise of a dogged detective from 1986 (Pride and Prejudice and Emergency Couple’s Choi Jin-hyuk) who suddenly finds himself thirty years in the future, in present-day Seoul. The detective’s name is Park Kwang-ho, which is also the name of the young police officer played by N, although they are two different people. But nothing’s ever just a coincidence in dramaland, is it?

The backstory for N’s character involves suffering a guilty conscience over an incident earlier in his career, when he’d received a report of a woman being stalked and not taken it appropriately seriously. The woman was killed the very next day, and he’ll work through his trauma over the incident over the course of the show—while, presumably, also helping with the main crime-solving team, which includes Yoon Hyun-min (Beautiful Mind) as a coldly logical detective who places an emphasis on evidence, as well as Lee Yoo-young (The Treacherous) as a psychology professor and profiler.

Despite the familiarity of time-traveling drama characters, I like this setup of having the central character being shot forward into a strange Seoul, which, to him, has developed overnight with smartphones and laptops, and where cases are investigated with the help of fancy new technology that he doesn’t understand how to use. The detective had been investigating a serial murder case in the 1980s before his trip to the future, and works to solve the case by discovering links between past and present. So while the setup may include serious events, I’m hoping for some situational humor as well, since you can’t have this awesome fish-out-of-water premise and not take advantage of it, right? The drama promises to present cases with “upbeat, warm humanism,” so I look forward to at least some lighthearted hijinks!

Tunnel follows Voice as OCN’s next weekend drama, and premieres in March.

OCN's really making a name for itself with its crime thrillers. I can't wait to watch Tunnel soon! N's character already seems interesting and I like that there will be a psychology professor in the team rather than being simply a minor character who's an advisor.

You usually get characters travelling to past, not the other way around. But I do hope that there's some humor. Though I love serious Choi Jin-hyuk, confused and hilarious Choi is love!

he was an awesome friend in Sassy Go Go.

Tunnel bares a slight similarity to Signal I guess, but shooting the hero right into future is interesting. shows that it doesnt always have to be "from medieval to present" or "from present to Joseon", because the world has changed so rapidly... no, wait, it is just me in denial that the 1980ies were nigh 40 years ago. waaaaaaaah! *freaks out* I can´t believe it has almost been half a century HEEEEEELP! *vanishes into the mist of time, panicking*

Ain't complaining if the said idol can act. He was fine in Sassy, so we shall see.

He's stiff in Sassy Go Go, and awkward. So so over fine to me. Heard he acted as cameo or something after that too but don't know how's he there

Plot and Choi Jin Hyuk will make me still stay tho, OCN always give masterpiece too nowadays

Are the writers openly taking 'inspiration' from signal now? Lol.

Well I haven't seen his acting yet, but since he has Seo Inguk as his sunbaenim, I hope he will fare well. :)

Good luck to N! His character sounds serious so I hope he can really pull it off!

Meanwhile , the premise sounds interesting...def adding this to the watchlist

I'm so happy I love him!! can't wait for this drama now

I cringed everytime i saw him on screen in Sassy Go Go. I thought he was really bad tbh. I usually don't mind idols if they can act... But N honestly just can't act imo

I was about to say I liked him in Shut Up Flower Boy Band, but remembered that that actor was a different letter in the alphabet...

11 This kind of time traveler mystery was EVERYWHERE even before Signal.

Signal got popular with this time traveler crime theme, but this kind of them was EVERYWHERE even before Signal.

can we stop with the Signal rip off talk?
i know you guys love Signal, but it's getting annoying.
this thing happens every time when something gets popular either it be drama, movie, or book.

it has similarities, but Tunnel is quite different from Signal even by reading the synopsis.
but you guys only try to see the similarities.
and you should not say stuff like "rip off" when you didn't even see the drama.

"rip off" is an offensive word toward creators/artists.
but it seems you guys are using it so lightheartedly.

+1000. I was going to say it too. I'm getting tired with people constantly comparing one show with Signal. Even Voice is getting compared with Signal, please, they are not even about the same thing. The only similarity they have is that both of them are crime thrillers. Are you guys going to call every crime thriller a Signal ripoff?

The time travelling aspect in Tunnel and Signal is vastly different.

Nobody has said it is a ripoff, I said "SLIGHT similarity" and fay said "inspiration". don´t worry, we´ll stop, although I didn´t even realize we had started anything.

I READ the word "rip off." that's why I wrote this.

There is another Tunnel page before this.
i guess i should have pointed out that i am not just talking about this page, but all other pages that talking about Tunnel and Voice.
It was getting on my nerve.

I only said that it is similar to time travelling serial crime drama Signal n we are not being offensive to the writer. Chill everybody !

What with this trend of idols using alphabets as their stage name? We had M (Shinhwa's Min Woo), V (BTS) and now N? Are they even aware that their stage name is so not google-friendly?

What would the 27th idol do when they have used up all the 26 letters? :D

Maybe a combination of two alphabets e.g. AG or smth like that.

In my opinion, most kpop stage names aren't google-friendly until the person gets popular. Like, Leo also from VIXX, Kris formerly of EXO, Suga of BTS, Joshua, Hoshi & Dino from SVT.

I have a slight memory of L & V having almost had different stage names that would have been much easier to remember.

OCN is specialist for making crime drama. It's sounds interesting and I anticipate for Cha Hakyeon acting as police (i think the role is serious character who really different with him irl). 차 학연 화이팅 !!!

OCN is truly an expert at making crime dramas.

I'm super excited for N to get another role.

I first saw him in the webdrama 'Show me the Money.' And it left me convinced he didn't have a single acting bone in his body.
But then I realized that project was absolute low production and filmed and shot within a few days. Very low, low production.

It really does depend on the quality of the drama, as well as the role assigned. I saw N in Sassy Go Go, and was really impressed by his acting. His character was completely retarded and it was very awkward to watch, but his acting was good. I hated that he was forced to act as a antisocial, anti-skinship character who had only 2 expressions in repertoire but if they would give him a decent role, even as a second lead he could show his potential.

I'm a fan of VIXX and I'm honestly very excited about this. The premise looks awesome and I'm a fan of Choi Jin Hyuk. You add my bias in VIXX to the equation and I'm sold.
I watched N in Sassy Go Go and I thought he did a solid job. Some people thought he was awkward in the role but that was just his character in a nutshell: awkward. He was also good in the webdrama Tomorrow Boy and I know he's been working hard and taking acting lessons. Hope he and the drama does well. Cha Hakyeon fighting!