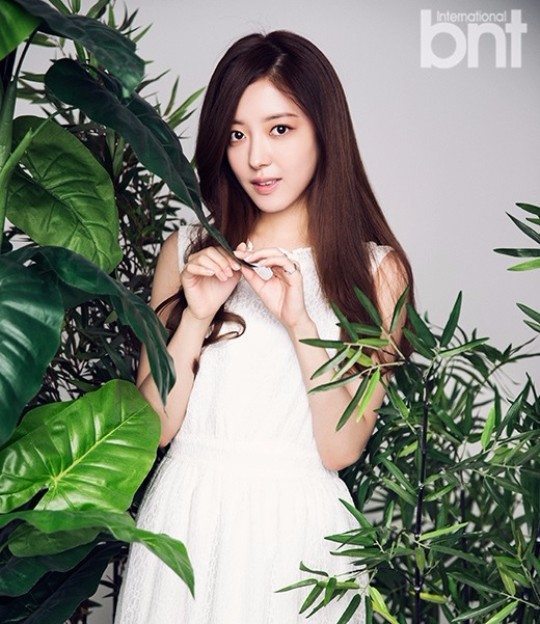 Lee Se-young was one of those actresses who had been in the industry for so long that I would recognize her but not remember any of the projects she had been in. So she was without a real breakout role until her most recent family drama Laurel Tree Tailors; she managed to snag the 2016 KBS Newcomer Award for her role as a cute spoiled chaebol heiress (even though she’s been acting for nearly twenty years… yeah, I don’t understand K-drama awards either). Due to her rising popularity, she’s been getting numerous offers; chief among them is the mixed-format youth drama The Best Hit about aspiring young musicians setting out to achieve their dreams.

Yoon Shi-yoon (Mirror of the Witch) and Kim Min-jae (The Lonely Shining Goblin) have already signed on to be part of the main cast, and Lee Se-young is the favored choice for the female lead character, who is a cheerful, perky civil servant exam student. The story seems a little similar to The Liar and His Lover because it’s about a complicated musician father-son relationship. The plot description says that a star who disappeared twenty years ago, reappears in front of his adult son in the present day and the rest of the drama is about the events that happen in their lives from that point on.

I could see the potential match-up between Yoon and Lee working out well because they both have this amazing puppy dog energy (Exhibit A: Enrique in Flower Boy Next Door; Exhibit B: Min Hyo-won in Laurel Tree Tailors). I’m also curious to see how the variety aspect is going play out, whether it’ll be similar to the feel of Producers. It’s being helmed partially by PD Yoo Ho-jin, who worked on 1 Night 2 Days, so the team definitely has a variety show expert on board, and if everything comes together, it sounds like we’ll be in for lots of good-natured fun and laughter.

Currently, The Big Hit team is going on a casting spree because they want to broadcast the drama by this May, so hopefully we’ll see this soon.

I liked her in "King's Dream" with my favorite Hwarang No Young-hak. That boy needs a lead role in a sageuk already, damn it dramaland.

I wouldn't mind seeing her in a lead role after all these years playing minor and supporting roles. She'd be great with Yoon Shi-yoon and Kim Min-jae.

I didn't really remember where i have watched her before Laurel Tree Tailor, glad she is finally landing a lead role. She was among the best thing in LTT. For 20 years experience, she had done around 37 drama and 9 movies - she can be considered as veteran already lol. She is still young anyway but has more than enough experiences to lead a drama, I hope to see more of her in the future.

I haven't seen a lot of her dramas but once I like someone in a sageuk I tend to root for them.

Our poor Im Joo Hwan is still stuck in 2nd lead for forever :(. He's one of those who is long overdue. I'd probably break dance in my room if he ever gets a lead role haha. That goes for all the underrated actors in dramaland.

When you mentioned No Young Hak, I remember I haven't finished yet his drama That Sun in The Sky which was aired last year. lol. He played some bad charcter if I am not mistaken. I love him too, need to find time to watch it although yes it is daily drama.

I watched him mostly in sageuks but I'd probably hate his character's guts if he's playing a baddie.

But he is quite handsome playing baddie lol.

He is gorgeous especially in sageuk attire lol.

UGH, I so second that! Noh Young Hak is so incredibly underrated. So amazing in sageuk. I need a starring role for him now. *shakes fist*

If I don't get Yeo Jin-goo in a sageuk then I'd want Noh.

Imagine a sageuk with both! That would be so amazing.

Jung Hyun-min hasn't written anything in a while and neither of them are busy at the moment.....haha I can dream.

He is our only hope now for another epic and fantastic conventional sageuk like "Jeong Do-jeon." I still watch it when I have nothing to watch. I really miss that great cast too.

What are you watching these days?

I'm enjoying Rebel but it's not going to be as good as Im Kkeok Jeong.

I didn't watch any TV for a couple months after the election, but The Americans got me started again, and now I'm really, really looking forward to Whisper (Park Kyung-soo <333). In the meantime I've been catching up on shows I had left unfinished. Some of the worse ones, like Gloria, are good fodder for knitting, so I don't really have too much of an impression of that one haha. I watched the rest of The K2, which really pulled together in the second half and surprised me in a good way, and finished This Week My Wife is Having an Affair, which disappointed me in the end. idk, did you watch that one? It could be me, but it felt different and interesting in the first 4-5 episodes, and then started to become tedious and predictable. It was worth watching for Lee Sun-gyun, though :D

Sadly my free time is dedicated to sageuks and I hardly make time to watch any modern dramas. I just haven't been able to finish one lately unless I really like the writer like Park Yeon-sun's Age of Youth.
As crappy as most of the sageuks are these days I do get to finish some. I can pretty much tolerate crappy dramas if it's a sageuk lol. Rebel is enjoyable although it has it's weaknesses.

She was amazing in Laurel Tree Tailors, one of the best things of the drama!

I really hope she accepts the role!

I have liked her acting in every single project I have seen her in (even if I did not like the drama). I always will cheer for her.

Sorry. I cannot say the same for Yoon Shi-Yoon. He had gained so much weight, he was almost not recognizable in Mirror of the Witch. What happened to that sweet boy from Bread Love Dreams?

He looks perfectly fine and healthy in my eyes.

The fact that he gained weight & you don't support him anymore because of that reason is ridiculous and funny. Hahahaha

The sweet boy grew up and became a man, and I don't even know why you're comparing 2 literally different characters from different centuries...but okay.

Are this serious? Yoon Shi-yoon is fine. Your standards, otherwise...

Googled and found that she was in some controversy as per titles of search.
Cute Chaebol!!? Gonna check her YT videos.

It wasn't her with the scandal. It's the other Lee Se Young from SNL-Korea.

I believe it is another Lee Se Yeong, who was in SNL.

I think you saw the headlines for a different Lee Se Young (the comedian).

She was in Adolescence Medley with Kwak Dong-yeon. I really liked that drama special and both the young leads were pretty good.

Best new actor has got to do with the first kinda lead role. Child actress mostly play few episodes. There are many supporting actors and extra in drama as well. So has been in many dramas doesnt mean get many screen time.

So far, I like her acting in every drama I've watched. She can play both cute and tough character (Love her in Vampire Detective. One of the few good things in that mess). Hopefully she'll sign in.

Yoon Shi Yoon and Lee Se Young, bring it on!!!

Looking forward to May then!

Wasn't she in Vampire Detective??

Wow, I just found out that she was the young Geum Young in Dae Jang Geum !!!

She was forgettable in Puberty Medley and kinda lacklustre in the movie Hot Young Bloods, but I blame that more on having been written as minor character and overshadowed by LJS and PBY's charisma so I'm keeping an open mind for this possible casting.

Sidenote: Also I just remembered that Park Bo-young DID play a badass female gangster-like role before Strong Woman! No wonder she seemed so natural in it lol.

She was good in that vampire drama with lee joon. Not awkward at all, i loved her character too. Will be looking forward to this.

She and Hyunwoo were the main reasons why I completed Laurel Tree Tailors. I love the maknae couple, they're so cute it hurts!! She and Hyunwoo had such good chemistry. Excited for this!

She mentioned in an interview (and so did Sung Hoon in a different one) that eligibility for Newcomer Award is 5 years after first role as an adult (vs. a child role). I think both she and Sung Hoon were in their last year of eligibility (his was for Five Enough on KBS). Don't quote me, but I think her interview was on the Laurel Tree cast guest visit to Happy Together, and Sung Hoon's was on one of the post-Five Enough short interviews (maybe Arirang TV?).