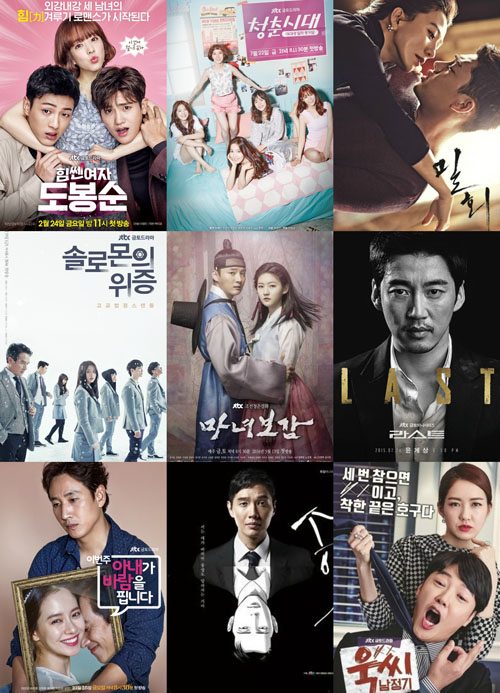 Cable station JTBC is branching out in its programming, and has announced plans to add short-run dramas to its offerings in the near future. According to a source with the station, JTBC is currently in the planning stages, and while it has not decided on scheduling, its goal is to broadcast them sometime this year. Late last year, the station announced an open competition that was aimed at both short-run dramas and web dramas, and accepted entries through the month of January; the winners of the competition will be up for production.

The station, being still fairly young (it launched in 2011), has been cautious to expand its programming, so it’s great to hear that there are plans to bring more types of formats to its slate. I do think the station’s approach in growing slowly has yielded results, in that their shows are often lauded for their high quality and “premium drama” status. Not all of its dramas have been winners, of course, but it does seem to have a strong track record of quality content (examples, in order of poster images above, include Strong Woman Do Bong-soon, Age of Youth, Secret Love Affair, Solomon’s Perjury, Mirror of the Witch, Last, This Week My Wife Will Have an Affair, Awl, and Ms. Temper and Nam Jung-ki).

Dramaland is no stranger to short-run dramas, which are shows containing a small number of episodes—often they’re one-offs, but they can be mini-dramas with upwards of eight episodes. The big three public broadcasters have all had their own short drama series (such as Drama Special, Drama City, and Best Theater), and we’ll occasionally see short series wedged in between longer ones, like Baek-hee Has Returned and Naked Fireman. They aren’t a robust part of the landscape since they’re not seen as very profitable, but they’re still a valuable format, as that’s often where rookie actors, writers, and directors get their start and gain experience. And sometimes they’re really quite remarkable—dark thriller White Christmas is actually considered a short-run drama, airing as part of KBS’s Drama Special series, and Taereung National Village captured all the sensitivity and youthful spirit of PD Lee Yoon-jung’s later shows Coffee Prince and Cheese in the Trap.

Currently, entries from JTBC’s open competition are being judged, and the station aims to complete judging by May. After that, they can turn their attention to which shows they will schedule and produce.

I love the idea of this. I've watched a few short run dramas (White Christmas and Page Turner being my two favorites) and like the format. It's a fun way to see something different without committing a lot of time. I do prefer the multi-episode stories over one shots but it can allow for some more unique stories that might normally be passed over.

As someone who don't have much patience for long and many episodes type of drama, I would definitely like this....currently Colours of Universe is one of the MBC mini (short) dramas airing now....

If it means more quality drama like Splish Splash Love then it's good. SSL reused many many tropes from other romcom but it benefits so much from its solid writing and production value. You can tell someone really takes their time to edit it perfectly instead of rushing it due to live shooting. The cinematography is beautiful and even all the song lyric fit into the scenes. And this would give a chance for less popular but talented actors and actresses - afterall what would SSL be without Yoon Do Joon and Kim Seul Gi?

You definitely speak my mind. I love the idea of this. At least the underrated actors/actressess will have a more chances to lead their own drama.

I also always thought 16 episodes of romcom especially is already more than enough, and most of drama have filler episode(s), so lesser episodes is definitely a good idea. I think 10 or 12 episodes will be perfect.

I also like twelve episodes drama format, I hope those kind of drama length get it's fixed time slot

I've enjoyed watching many a KBS2 short-run drama, as well as KOREAN GHOST STORIES aka HOMETOWN LEGENDS, which included a surprising number of veteran actors in the casts. I've been pleased with the quality of the productions overall. One advantage of the abbreviated format: there's no time for horsing around with filler.

The format offers flexibility for cast and crew who might not be able to commit to longer gigs owing to scheduling conflicts. Plus its an opportunity for new actors to gain experience.

J-drama's usually have 10-12 episodes. Maybe kdrama's can follow them. Hohoho

The dramas mentioned reminded me of Gogh, The Starry Night. From a 20-episode web drama, it became an SBS 4-episode weekend filler drama.

All for this! Sometimes you're in a drama slump or just not in the mood to commit to a long-run drama, and so to watch one that has just a handful of episodes is perfect. Because of the quality of their dramas in recent years, I'm even more excited that JTBC has decided to go in for this. Will be watching for more news headlines about this one.

if they don't cast idols as leads all will be okay for me. I can't watch webdramas beacause the really bad acting idols in it.

I'd rather see an Idol in a short drama than a full length one. This would provide a way to see if they have the chops. There are some amazing idol-actors out there (Lee Joon and Im Siwan come to mind immediately). Then there are terrible ones that keep getting lead roles (Suzy) over better actors and actresses. Casting idols would also draw in fans.

I think drama specials have the opportunity to more liberal with time. Bride in Sneakers, for example, was a one-off drama based over the events of one night and it was so great. Shorter stories like that should always have a chance.

Much love for Age of Youth and This Week My Wife Will Have An Affair! I hope they make more of those ♥

I believe they are making a sequel to Age of Youth! That drama is one of my favorites, so I am so excited for it.

Somebody cast Kim Mu Yeol in one of the dramas, it feels like forever since my beautiful Bride aired and he vanished from the land of the living in dramaland.

You are right I miss him already

By short if they mean 8 episodes, that's okay, or even 10. But by no means any drama should be finished at only two episodes. I have not yet forgotten the scar from splash splash love, sobs. Heck, I even demand to promote the under rated actors in cable channels like jtbc, ocn since they don't get much recognition in the big 3 or tvn. Tvn has also kind of grown bigger for their foot, and now they are taking idol actors for their promising writer driven dramas, so may be unappreciated actors like kim seul gi, kang ha neul or kwak dong yeon and more like them would get a chance now. And I would love to watch more dramas like 'white Christmas', such a fine drama and so many low key actors whom we don't see much in dramas now for how they really are (as actors), it's more like the movie 'breakfast club' where each character had something to say, so not your typical girl met boy and fell in love kind of drama.

I must be one of a very few who don't like the short dramas as much. What I love about kdramas is how much you get invested in the characters over time. Shorter dramas are over by the time you're invested in a character. I've seen a couple that just threw in every trope/cliche they could in so it was mostly just cliches with very little plot or character development. Watching dramas is like reading a great novel that you can't put down. Shorter 10, 12 eps are like short stories. They have their place but I much prefer a rich and in depth story. Having said that, I did enjoy Naked Fireman and Secret Message. Having a few shorter ones is okay but I hope it never totally replaces my 16, 20 episode dramas.

I love KBS Drama Special. It's short but not necessarily badly produced. There's something for everyone: romance, coming-of-age story, self discovery, family, friendship, fantasy...you name it. And often times I found that the message of the drama is better delivered in shorter dramas like these than the mini-series.

I can think of so many dramas that could have been great if they were shorter! Too many writers use non-essential, drama flattening filler to plump up their scripts with the result that after the halfway mark, it's all downhill till we perk up for the finale. Even some of my favorite dramas suffer from this. If a writer can't fill up the time space produtively and entertainingly for sixteen episodes, for the most part I'd wish they'd just scrap the script and write one of these minis.

To my mind, the perfect number of episodes for most Korean dramas would be ten to twelve. That's because we tend to great story, character development, plot for the first eight, sometimes ten, episodes, then there's a boring lull for the next four to six episodes before the last two episodes wrap things up.

I am all for shorter dramas. Episodes 1 and 2 to introduce the characters and the conflict, 3 to 6 to get to the meat of the drama, 7 and 8 to resolve the conflict and 9 and 10 for the happy ending. I could probably name at least a dozen dramas that would have benefited from trimming the fat.