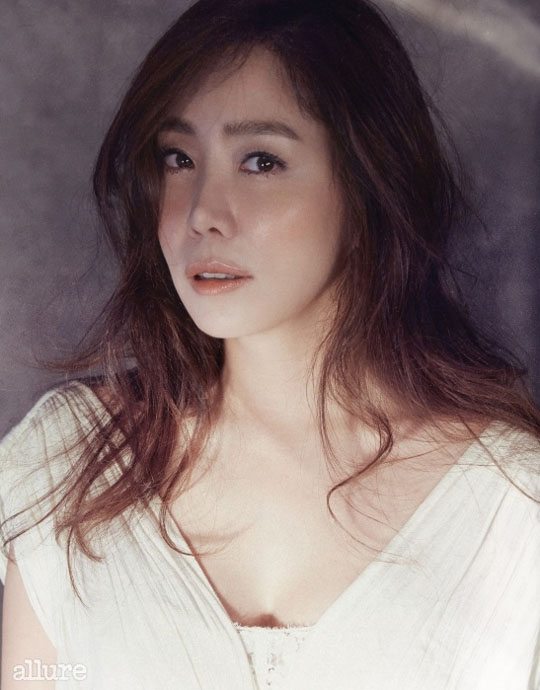 Kim Jung-eun (Make a Woman Cry) is eyeing a return to television with the upcoming OCN drama Duel, which recently cast Jung Jae-young (Assembly), which would be her first project after getting married last year. The drama has an intriguing premise, in that it involves human clones who get entangled in a fierce clash of pure evil versus pure good.

Jung Jae-young will play police detective Jung Deuk-chan, who gets caught up in false accusations when the villain, our evil clone, starts carrying out a bizarre series of murders wherein he takes his victims’ organs. Jung Jae-young is put in a desperate situation when his daughter is kidnapped and he has to fight to save her while also clearing his own name.

Kim Jung-eun is up to play a prosecutor, Choi Jo-hye, who works on violent criminal cases. She’s described as a commanding woman who doesn’t hide her ambition and thirst for success, but it sounds like that backfires when she uses Deuk-chan (presumably to gain something in her case) and ends up being the reason he gets embroiled in a shocking incident. She harbors suspicions about the relationship between Deuk-chan and the clone villain and is determined to get to the bottom of the mystery. It’s been a while since Kim Jung-eun has been in a prime-time miniseries (her last was 2012’s body-swapping comedy Oohlala Spouses), and even longer since she’s been on cable (in 2012’s ill-fated high-budget action flop Hanbando), but she’s a talented actress and I’d be happy to see her in a dark cable thriller.

I have to say, I find a lot of dark crime thrillers to run quite similar, but the human clone angle is a new one that’s piqued my interest. Now we just have to see who they cast as the villain, since that’ll be key to injecting some fire into this showdown. Duel is set to follow Tunnel, premiering in May.

That is Kim Jung-eun of lovers in Paris??
dang!...I can't recognize her so I googled her name as as my eyes may be playing tricks on me. too much PS is nasty.

Yup... She is The Queen of PS. New drama=New Face

She looks beautiful for a nasty PS queen tho.

Clones? Is this a sci-fi drama? Might give it a chance.

What happern to her face? She looks like a cyborg!

How about SSR? (Liar Game)

Wow, I seriously haven't seen her in a drama since Lovers, with Lee Seo-jin!

Yeah, that long ago.

Wow. Agree, didn't recognize her. I had to think this is the Kim Jung-eun from Lovers in Paris and All About Eve?! She was so pretty in All About Eve...wish she didn't do anything. Maintenance of PS seems to be worse as one ages. But glad she will be back on the screen soon. I liked her in Legend.

Wow I didn't know she was in All About Eve! I only saw Kim Jung-eun in Lovers in Paris and Lovers. I watched bits of AAE when it was being aired on tv and only remember Chae-rim and Kim So-yeon. I'm kinda curious what role Kim Jung-eun played. Wikipedia mentions her in the cast but she's not in the plot summary...

She played one of the news anchor/mentor, Jang Dong Geun's old family friend's daughter who had a crush on him. All About Eve was very good...so long ago! Yes Kim So-yeon was in it too! Everyone was so young back then! Hope you finish it!

Thanks for replying with KJE's role! Now I can sleep at night :D I don't know if I'm up for another AAE marathon. But it should be interesting now that I love Kim So-yeon as an actress. (Instead of just hating her on sight back then. LOL what a character!)

Is it really Duel and not Dual?
When I use Google translate on the Korean name 듀얼, I get "Dual" as the result.

I was unimpressed by Kim Jung-eun in "Make a Woman Cry." Yes, she was good with the action scenes (and maybe that is why she has been offered this role), but she showed no emotions throughout the drama.

Maybe actresses in s.Korea should minimize their plastic surgery. They can hardly emote with all the works done on their face. Tsk, tsk..

Saving his daughter while clearing the accusation against him as a murderer? And there is a prosecutor who accidentally causes the hero to be a suspect. Sounds very much like Two Weeks except for the clone part.

with plastic face like that can she emote ?? cuz I did not watch her latest dramas. I don't understand with her obsession with PS. Its ruining her face, she used to be beautiful.