Cheese in the Trap

More cheese please! New stills for the Cheese in the Trap movie 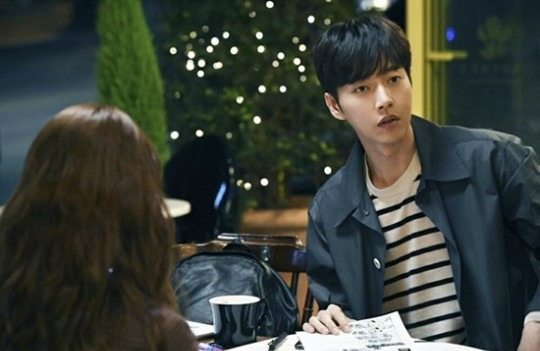 We have new stills for the movie Cheese in the Trap! Cheese in the Trap, which is based on a very popular webtoon by Soonkki, is a slice-of-life drama set on a college campus that centers around college student Hong Seol, played by Oh Yeon-seo (Come Back, Ajusshi). It follows her everyday happenings as she gets pulled into the mysterious life of Yoo Jung, played by Park Hae-jin (Man to Man).

The movie version has (mostly) a fresh cast from the drama version that aired last year (Park Hae-jin is, of course, reprising his lead role), and we get our first glimpse of them in the newly released stills. In the movie version, it’s 2NE1’s Sandara Park (One More Happy Ending) who plays Seol’s supportive best friend Jang Bo-ra, while rookie actor Kim Hyun-jin fills out the trio as third bestie Eun-taek. In the stills, we see them both stepping in protectively to help Seol when she’s harassed by her stalker, Oh Young-gon, played here by Oh Jong-hyuk (Healer). Moon Ji-yoon will look familiar to fans of the drama, since he played the same role in the tvN show, pain-in-the-neck sunbae Kim Sang-chul.

I have heard good things about Cheese in the Trap, though I haven’t had a chance to watch it yet. The drama version burned quite a few fans, but hopefully the movie lives up to the fans’ expectations. Or will that be impossible?

Cheese in the Trap is directed by Kim Je-young (So I Married My Anti-Fan) and started filming last month. 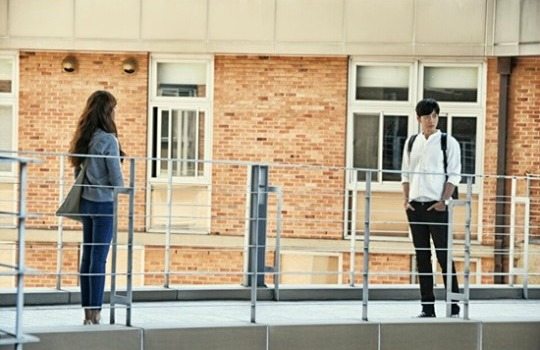 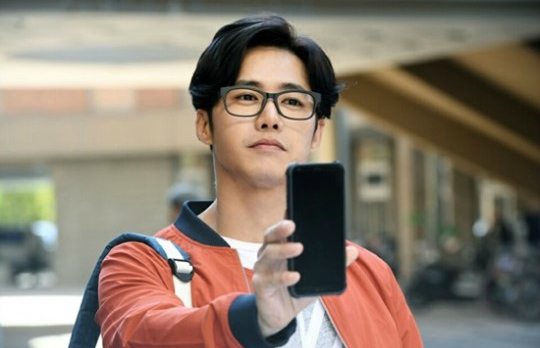 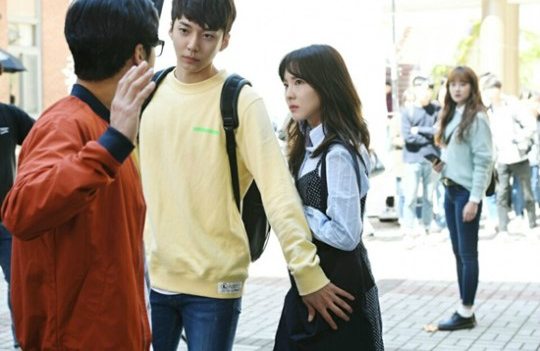 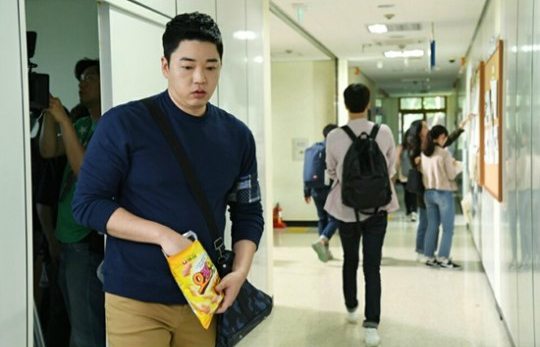 This is still so weird to see. It's like deja vu.
Also, the fact that Sang-chul sunbae is played by the same actor does not help.

True. It does feel like deja vu. I'm wondering how they're going to pull it off with what are clearly older actors than the drama version.

I'm torn. I though he was great as Sang-child in the drama. So in a way I'm glad he's back again... but it does add to the "huh, weird!" feeling I have seeing this redone so soon with PHJ.

I agree. It seems odd. I think they should have changed 100% of the cast or bring everybody back.

That would've been perfect–if they brought back the original cast from the drama. I was at least hoping Yoo Jung sunbae wouldn't be falling in love w/ a completely new Seol...

Exactly my thoughts! I don't think I would want anybody else doing Seol other than KGE.

It's indeed like a deja vu,i'll take it as a parallel universe jajja

That's actually my problem here. As a CITT drama series and manhwa fan. This is hard to watch for me. I rewatched the series so many times it's hard to replace the characters in my mind. Haha!

Aw man, Hae-jin oppa looks GOOD in those stills. And by "good," I also mean, not old! Hahaha. It's the hair and the outfits that helps him maintain that youthful image. I'm over the What Could've Beens (there's just so many), so I'm totally looking forward to this and seeing how this one turns out. Boo to no pics of Yoo In-young in character yet, but I hope that means I'll be thoroughly surprised when she finally appears.

Park Hae-jin ALWAYS looks good. But, this cast is rather old all around (for folks that are supposed to be in college). Most of them are all over 30. But, thankfully they are all so youthful. My god, Sandara never ages!!

Haha, yeah, I guess... I was just surprised he doesn't look TOO old and out of place, but I'm sure they'll be moments where they'll ALL look a little too old and out of place. That's a given, considering their rl ages, but hey, movie magic and a lot of overlooking on our end, which I don't mind. Hey, it could be worst–they could be high schoolers! (Let's not bring up the fact that we'll get some flashbacks of them in hs uniforms, heh). But I agree w/ you on the overall youthful vibes.

I think most movie/tv watchers turn a blind eye to actors playing younger. How many shows have we seen where twenty somethings were playing high schoolers? Or in the case of flashbacks, 30 to 40 year olds? TONS.

At least they are not in High School!!!
?

My Oppa is ageless. He could be pushing 50 and still play Yoo Jung and look 35. *doublewinks*

I liked the drama and I'm looking forward to the movie version. Park Hae Jin was perfect as Yoo Jung so i don't see anyone else playing his character, i hope this version is closer to the webtoon and his character gets more attention.

That's what we're all hoping (especially Park Hae-Jin and Soonkki, herself), really, that this movie version will be everything that the drama version was missing.

Yeah, the expectations are high for the film version and i hope they deliver.

It's a little awkward to see that the whole cast is quite old to play college students...

I promised myself not to be excited about the movie until I've I watched it but I just can't help it!! The pictures are enough to give me all those feels!! I need more now T_T

Still feels weird. I'm just keeping my fingers crossed that we get the Cheese ending that we deserve so I can mentally fix the drama with the movie ending whilst still retaining the story with my drama actors in mind. Also, I'm impressed with how different Sandara looks. Not as glamarous as I've always known her to be. What a difference a wig makes :).

but I def did a double take on the last screenshot as I didn't realize that actor was returning to the movie as well...he def annoyed me in the drama lol but I guess that was the point since his character was supposed to be annoying

Excited for the movie version! More Park Hae-jin is never a bad thing I say. xD
Also, y'all at Dramabeans keep writing 2ne1's Sandara Park and it makes me cry ;_; Thanks for that <3

They all still look like college students, especially Park Hae Jin! I hardly recognized him...he looks nothing like his Man X Man character.

I still expect Seol to be this petite girl.
This is not enough of PHJ in the pictures, though. O-oh, I´m gonna have some withdrawal after MxM.

This feels so weird, seeing some of the actors play the same character from the drama. Also I am not 100% on board in seeing Oh Yeon-seo play Seol. She is a good actress but somehow I am just not feeling it.

Oh man, I don't know how I feel about this. And so soon after the drama. I mean, yeah, I'm likely going to watch it. But it's a tad weird to see the same story but a mostly new cast mixed in with actors from the drama. It almost makes it feel off. Like the feeling after you've unpacked your room after moving---it's a different unfamiliar room but has many of the same items as your old room.

Except, it's not the same story. Based on few pic taken by fan there'll be more scenes in the webtoon that the drama leave out. And the second half of the story will definitely different.

I wanna be excited for this drama I really do but I still dont see why they couldn't get rid of the image of the drama by at least getting a new cast completely. But because some of the characters (especially the leading role) is played by those who played those characters before I just cant help but think of the old drama......

Not replacing PHJ is a good decision.. had they gone for 100% overhaul.. the movie would have got less interest and negative vibes from fans from the beginning..

The drama- casting, treatment was very very high quality.. the only leeway the movie had was fans being dissatisfied with the ending (feeling sorry for PHJ and anti feelings towards both seol and in ho)... casting wisemovie is more or less on track..

the girl who is playing in ha.. isn't she the sister from mask..

man after drama version of in ha.. she will fall flat.. not a fan of her acting.. and neither is she glamourous for me..

In ha is supposed to be someone, who is god level pretty so that everyone keeps falling for her..

Except for PHJ (probably new seol.. although tough).. not so motivated by the cast..

but story is so amazing.. that i would tune in.. no matter what.. although director better be good.. beause all said and done.. drama was very high quality from music to every little thing

I'll follow Park Hae Jin into whatever trap he finds himself! <3

This feels weird to me. I love the original casts so much. It's hard to replace them in my heart.

Eun-taek is the villain's secretary and right-hand man from Man to Man.
Also, I'm lactose intolerant, but CHEESE!!!!! I beg you in the name of all that is good and pure in this dirty but pretty world, be GOOD!

I'm just waiting for the release date so I can put on my calendar, I'll watch anything for Park Hae-jin!

Are you still watching My Daughter Seo Young over and over again like me? Because I don't want to be the only one who keep rewatching family drama. Lol.

Cheese in the Trap! Drama is drama, movie is movie. I don't want to tiring myself to compare of two. Tbh, I can't wait for the Movie since Soonkki involved. I'm so exciting~

Could we have an article on Park Hae-jin every day, please? It feels like Xmas every time I see his face.

Loving the pic of him. Oppa, why you so pwetty? I prefer him with his freed forehead, but he looks so cute with his bangs here. I like the other cast members. They look like the original drama characters...giving off the same vibes. KGE, I miss her even more seeing these stills.

Is the manhwa finished? Because honestly after the messy end of the drama I'd rather see what the original source did since the drama took its own turn.

Don't know why Park Hae Jin wanted to do this, maybe for redemption coz his character was written off just like that. But I really hope he won't be as cold as the tv version. You know he gave off that vibe like he was so insincere about the whole thing, like he would just betray the girl in the end, that I kinda wished she ended up with the Seo Kang Jun character, if only he is not such a loser coz I really think they hv more chemistry.

I'm curious but it really sounds weird and awkward ?

But that guy from HEALER look too handsome to be a stalker..

I want to look the korean movies

oh no! Where is Kim Go Eun! I won't watch it without her!

it would be fine for me if other characters were replaced as long as sunbae Yoo Jung is still there...all of them are good actors and actresses

ive watched Oh Yeon-seo in Come Back, Ajusshi im amazed by her role as a "guy" and she was good :-); i love Sandara Park for portraying Bo-ra i've known her since she was also an actress here in the Philippines; ive seen Yoo In-young in the series love from another star... they are all great and i'm excited to watch the movie version