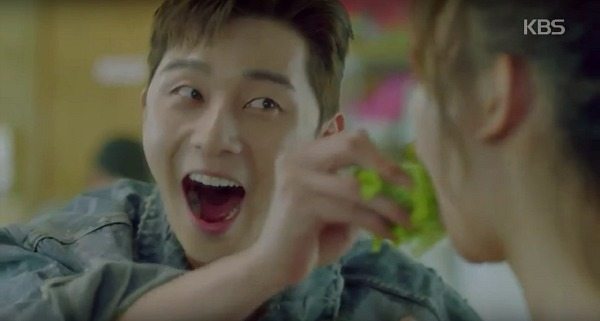 The level of petty in this new teaser is glorious. One of the reasons I adore friends-to-lovers stories is because of the constant bickering involved, and from the looks of this teaser, we’re in for some epic squabbling between our two leads.

Just to recap Fight My Way’s general premise and characters: Park Seo-joon (Hwarang) and Kim Ji-won (Descended From the Sun) star as childhood friends whose relationship is built on their mutual love of teasing each other. Ahn Jae-hong (Answer Me 1988) and Song Ha-yoon (My Daughter Geum Sa-wol) play a couple going on six years, who are the leads’ friends. These four friends, called the idiot fantastic four, all struggle to achieve their dreams in spite of their third-rate specs, and find love and maturity along the way.

The second teaser features the four friends sitting down for a meal, and I’m loving this show’s sense of humor, because the “fight” in the title is shortened slang in Korean, but it’s also the same word for lettuce wrap. We can see the polar opposite relationships on full display when the Ahn Jae-hong lovingly makes a lettuce wrap for Song Ha-yoon, complete with aegyo and airplane sounds as he feeds it to her.

Park Seo-joon and Kim Ji-won look on in a mixture of disgust and disbelief, which is the same expression I would wear in the presence of such lovey-doveyness so I love them to bits already. Kim Ji-won then mock-imitates Song Ha-yoon and aegyos for Park Seo-joon to make her a wrap, to which the latter goes, “You out of your mind?” Lol.

She insists, so he acquiesces and makes a wrap to end all wraps, to the horror of everyone else at the table. He says, “You asked for a wrap. I’ve made you one you won’t be able to forget. Ever.” Ahh, the petty, it’s amazing. He stuffs it into her mouth and she lets loose all sorts of curses behind a mouthful of lettuce, to which he quips, “I made it big just for you, to become human. With three garlics.” We end the teaser with her smirking and a bouquet of lettuce in her hands, as she builds her lettuce wrap of revenge.

Fight My Way will begin its run on May 22 after Perfect Wife ends. Let the bickering commence!! 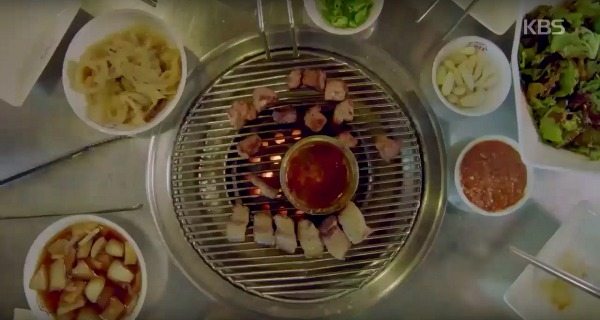 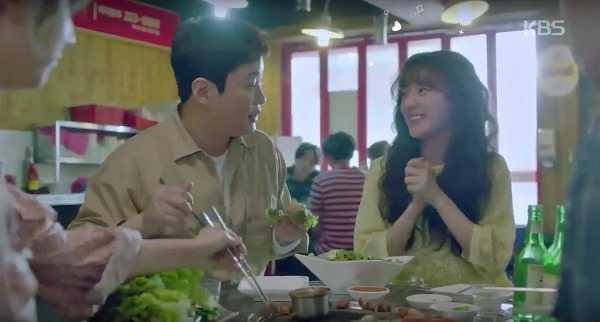 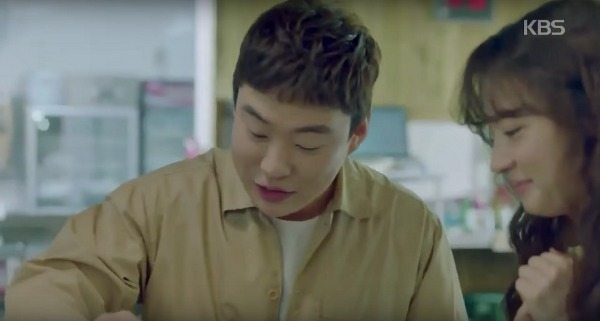 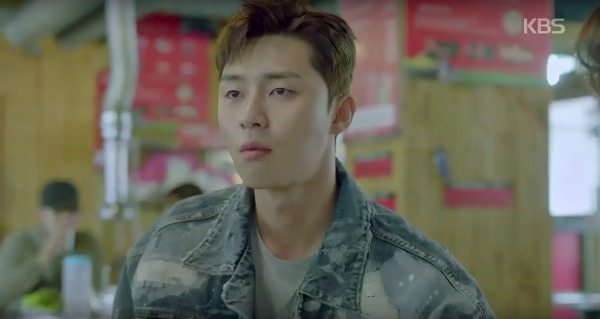 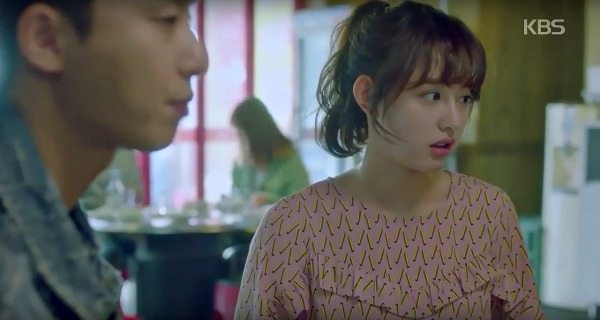 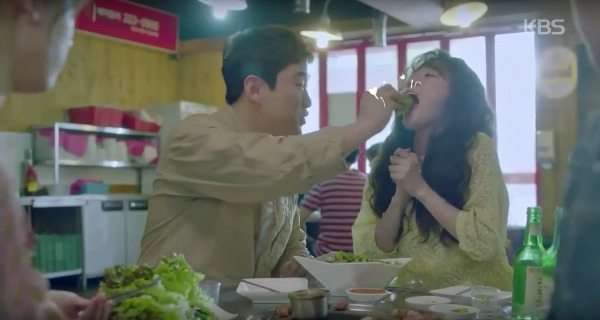 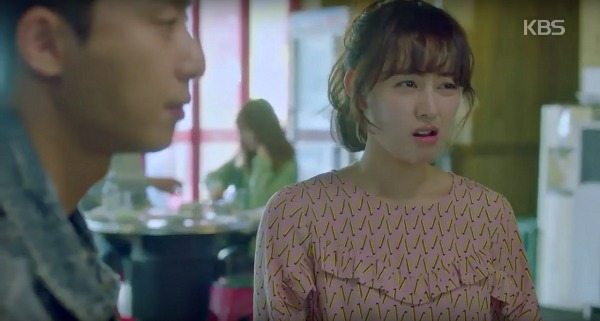 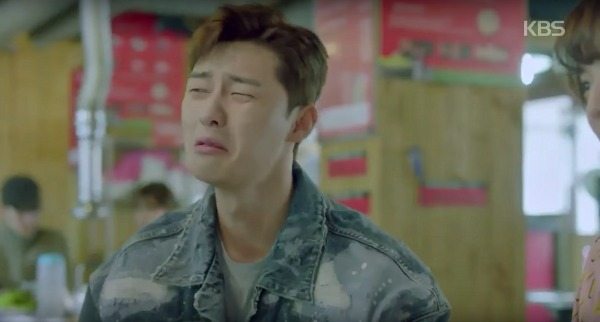 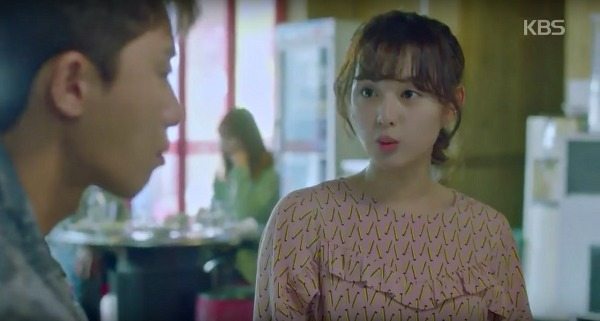 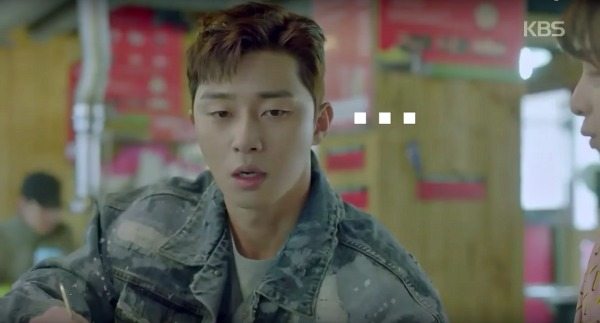 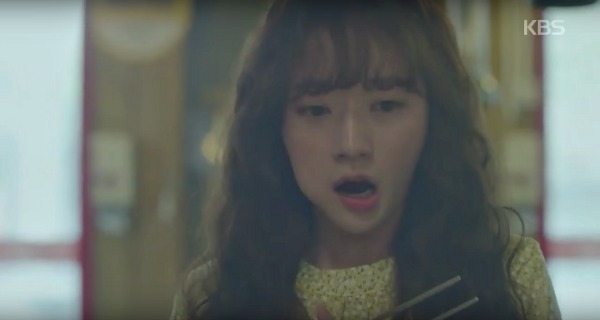 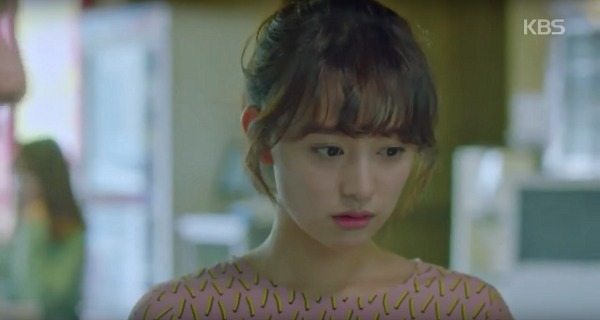 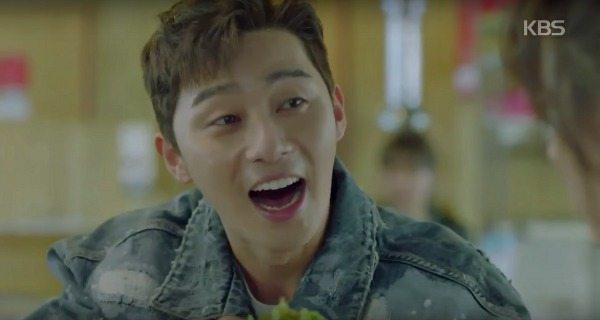 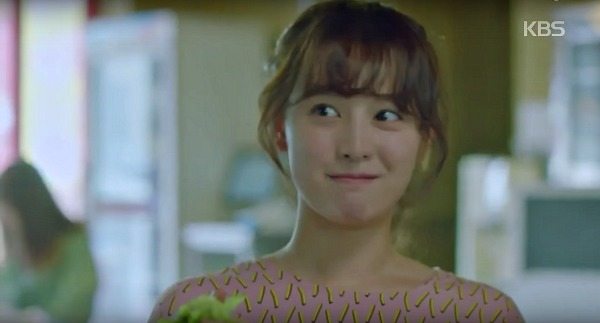 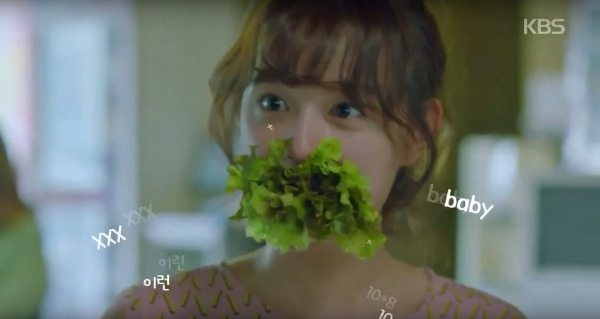 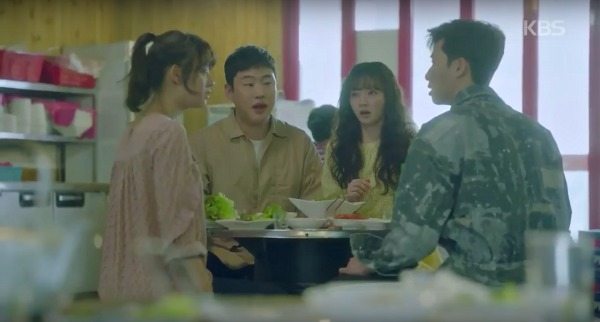 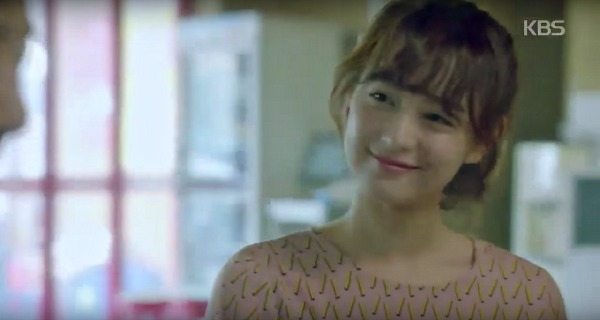 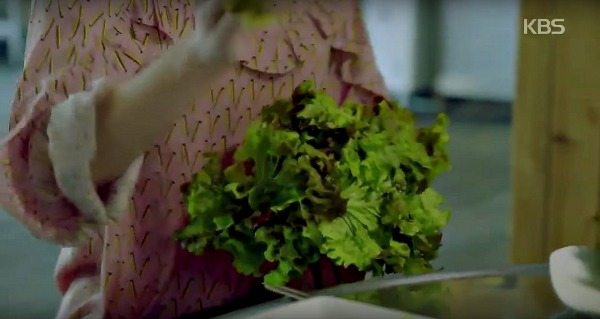 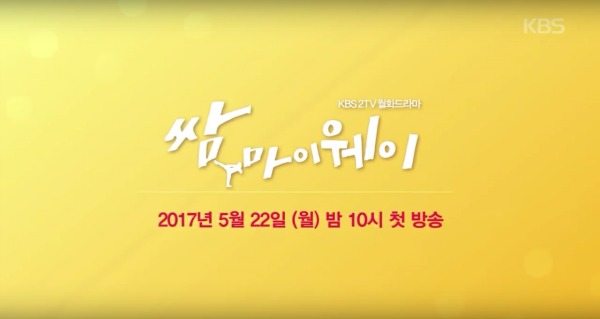 God they look so much better than I could have ever imagined. Can't wait to have some more PSJ on my screen. Hopefully less yelling and jumping in front of arrows and assured death this time, though.

Hahh you really speak my mind. And hopefully no makjang in the middle where suddenly kim ji won is park seo joon's sister as he always has tendency to fall for his sister.heh

I'm so excited for this; I love PSJ to bits and desperately hope this hits my romcom sweet spot. I've been feeling so empty post-SWDBS...

I don't know why but I always love it when characters mimic others for fun, PSJ did the best face ever for that. So excited for this show (and like a million others this month, which isn't good for my exams)

I have an exam on the 27th and I shouldn't wish for the 22nd to come faster, but how can I not?! WHO ELSE CAN RELATE? #thehardlifeofakdramafan

My only complaint is that it's now further away due to exemptions T T Otherwise I'm loving Park Seo Joon's facial expressions and muttering mouth in this clip....are you crazy? So fun

I cannot wait for this!!! They looks super adorable

They seem to have a good chemistry ♥

I already love this drama so much. I'm super excited to start watching it.

This show had me at "lettuce wrap of revenge."

I'm so just freakin' excited for this show. KJW and PSJ have great chemistry. PSJ is so awesome when he's funny and I'm looking so forward to the bickering that both him and KJW do so wonderfully. This is going to be such a hoot!!!!!

They are me when my friend couples makes me feel like a total third-wheel!

I'm loving the pettiness and the teaser is already giving me a lot of hope in terms of chemistry and bickering! Can't wait for May 22nd!

OMG!! This looks so cute!! Petty antics are always a win. I cannot wait for it to be released.

Haha, oh the shenanigans between these two, they're going to be glorious and I just can't wait. Such a bummer that we don't get this next week as originally planned, but I'm just gonna keep thinking about how much better show will be with the added time.

Finally Park Seo Joon seems to have found a character that suits him again!

I didn't find it glorious, funny, cute, etc. Forced too much.
Just me ?
Still, KJW is supper pretty

It was as much fictional as it could get. Pretty typical drama behaviour and mannerisms. Nothing real at all.

Ha! This looks like it'll be all sorts of cute. Please, drama gods, I NEED it to be good!

I don't know but I am not liking both the teasers so far. I don't find the supposed strong friendship bond between Park Seo Joon and Kim Ji Won believable at all. From what being offered so far, the connection between them feels kinda staged. Not going to pass any judgement yet but the teasers dampen my mood to even try watching.

The relationship is fixed. Right away you can tell its a fiction and all their actions are overly abused cliches. It looks entertaining and that's it. Substandard subway food.

Ok, I am so excited for all these new dramas coming up!! Maybe one of them will finally break me out of this drama slump!

Cute! Liked how they played with the word of 'ssam', hahha

OMG the tease is so hilarious ?!
Please, Please, please May 22 come faster ??

I love when Kim Ji-won try to baby talk, it's horror and cute at the same time ?

Friends to lovers is my most favourite genre. Indians would better know it 'Kuch Kuch hota hai' syndrome. Bring it on, Show.

Cute and Funny teasers aside, I really want this drama to be well written. I am trying to keep my excitement and my expectations to a minimum because I have been disappointed by dramas lately.

This is super cute and adorable. I'm excited already..

cute, cute, CUTE!!! I didn't really care about the plot at first, it's enough as long as I can see Park Seo-joon and Kim Ji-won together but now I can't wait for it to come my way already.

This gonna be my new drama crack lol

The color tone is a bit strange. I just want normal color like what our eyes can see, whats up with kdrama lately.

I know, why is everything so overdeveloped, bleached out and foggy recently?

Lettuce wrap of revenge, LOL!! This looks so fun, I can't wait!

Hahaha lettuce wrap of revenge is my new favourite thing. Pleaseeee drama gods let this be as good as it looks!!

I've watched these a few times and still laugh when i do..Can't wait for this!!

Goshhh, Jiwon and Seojoon are hilarious with their reactions to their friends being lovey-dovey. And them re-enacting it but in a non lovey-dovey way was still somehow sweet. What really got me was Jiwon preparing to have her revenge to the point that it looked like a flower bouquet.
I can't wait for the dynamic of their romance. And even more, their friendship and hilarious bickering.
I don't want to raise my expectations but this teaser already tells me this drama is gonna be a fun watch. May 22 please come faster.

I've actually never seen Kim Ji Won do comedy so I'm really looking forward to that one. Plus, Park Seo-Joon is hilarious and man, I could do with some hilarity right now. Presidential elections are STRESSFUL.

It is not possible for me to be any more psyched for this drama! I need me a tunnel/a talisman/ a walkie-talkie equipped with a video feed :-/
I am not good at the waiting game :(

(Had to delete my earlier comment because of a typo D:) I like the friends to lovers, underdogs in society x rom-com setup, and the puns (!) that are starting to go around. But I do hope the eventual comic tone isn't too overwhelming or in-your-face, or will at least be balanced out by depth in characterisation.

Though it makes the waiting longer, I'm actually happy about the delayed broadcasting date if it means that it'll buy the show time for a more solid execution, because from how late they started releasing details and teasers, the production seems to be on a very tight schedule.

PSJ and KJW is super cuteeee! and since it's KBS, I hope both of them will be guest starring at 2D1N. PSJ at 2D1N is definitely much funnier and better than his appearance at Hwarang

I'm loving these teasers and the four of them look fun together. Will definitely be watching!

This pair of buddies will be lethal for each other, won't they?
Hahahahahaaaaaa...

Yay, it looks like PSJ has found a character that suits him: petty, smiling, teasing, modern. He needs to stay away from historical dramas for a while (or at least wait until the Rebel director and production team offer him a role).

May 22nd seems like an eternity away though! Where's a time travelling device/tunnel/pond/heaven's gate when you need it?

OK, this might be cute, but it can also be annoying if they fight and scream at each other every episode. I'm going to have a headache.

hhhhhhhhhhhhh this is Hilarious!! can`t wait for the drama/bickering to start!! LOL “You asked for a wrap. I’ve made you one you won’t be able to forget. Ever.” hhhhhhhhhhh

This look fun. I'm not enjoying anything right now. Hopefully this will get me going.