Black dresses and pink stilettos for Woman of Dignity 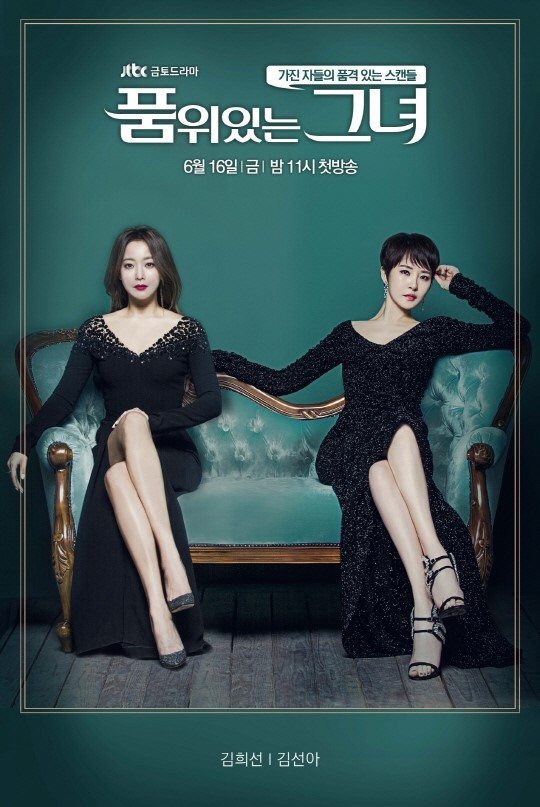 We’re two weeks away from the premiere of JTBC’s Woman of Dignity, and some more posters of the upcoming female-centric drama have been released. After Man to Man’s adorable bromance between an action star and his spy bodyguard, I look forward to the female equivalent that Woman of Dignity’s producers and its stars promise us.

The more information I get about this show, the more dissonance I feel between the plot and its purported tone, which is reflected in the posters we’ve seen. The story sounds like a pretty standard melo: A chaebol wife, Kim Hee-sun (Angry Mom) gets her world turned upside down when a mysterious and ambitious country bumpkin, Kim Sun-ah (Masked Prosecutor) enters her life, and they trade places on the social ladder. The poster above with the two ladies in black is more indicative of this makjang-ish plot, though I do love the almost goth vibe they give off in the poster.

However, Woman of Dignity has touted itself as a satirical human comedy, and with the promised friendship between our two leading ladies, I’m hoping that the tone will be lighter like in the individual shots below. The posters name Woo Ah-jin (Kim Hee-sun) as the titular woman of dignity, while Park Bok-ja (Kim Sun-ah), in a maid outfit, is described as the woman who wants to be Woo Ah-jin. Woo Ah-jin asks, “Tell me what is it you want,” and Park Bok-ja replies, “Make me like you.” They both look beautiful in these posters, but all I can think of right now is how much I want those shoes. Completely impractical, but so, so pretty…

JTBC’s Woman of Dignity will follow Man to Man in the Friday-Saturday slot, and will premiere on June 16. 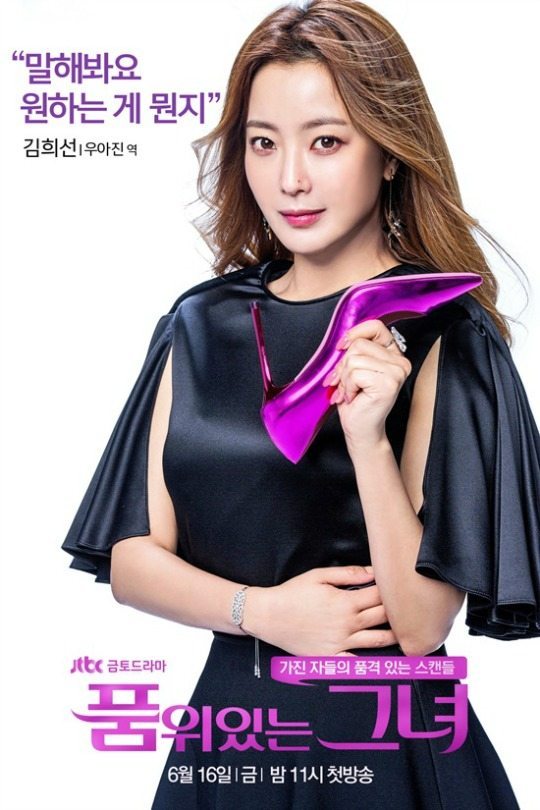 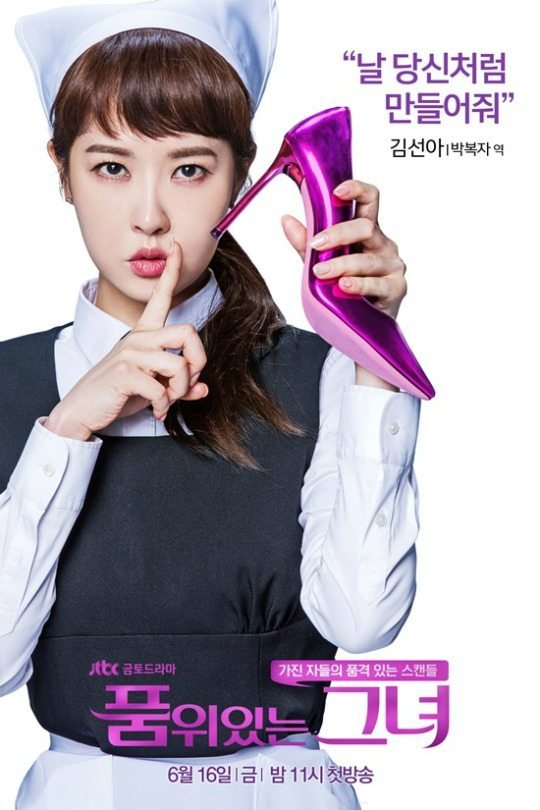 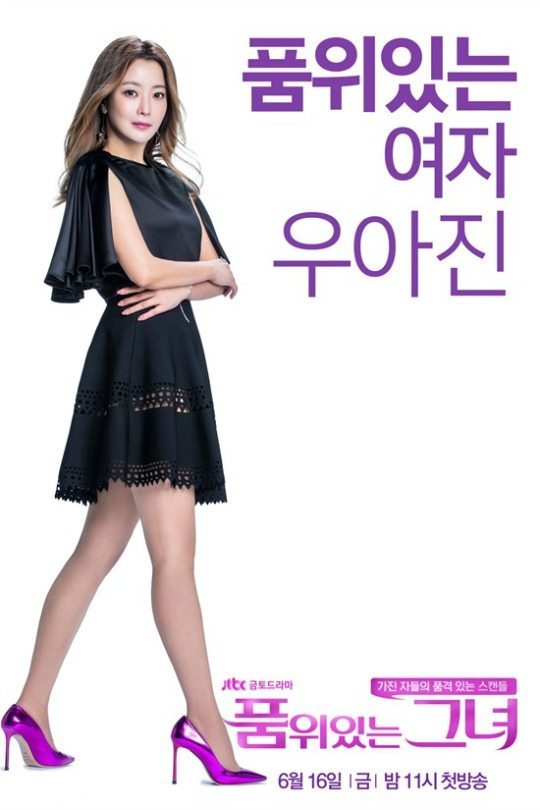 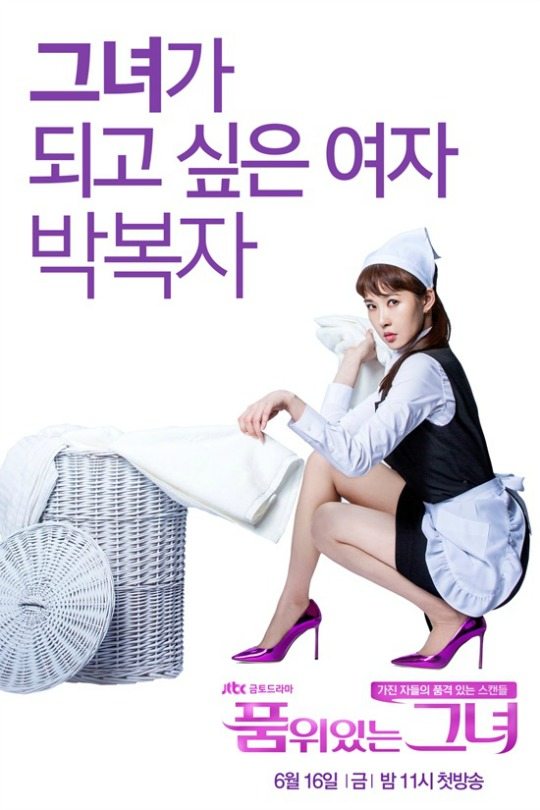 Plot twist: the dissonance between the two sets of posters (and the teasers) is intentional so people watch the first episode just to figure out what the heck the show is really about.

I like this type of promo much better than the melo teaser. They look fabulous.

Kim Sun-ah looks so cute in the second poster..! She hasn't aged at all.. Her posters this time round remind me of her character in My Name is Kim Sam-soon! Probably because of the ponytail (:

Hoping it'll be more a fun comedy rather than a melo because I really wanna see Kim Sun-ah again on my screen without wading through too much angst!

I got My Name is Kim Sam-soon vibes too! She looks amazing. So youthful!

Think she did something cos she looks so different from scent of a woman, didn't recognize her

If I remember correctly she lost a lot of weight for Scent of a Woman. I think this is more of her normal look.

Love those stilettos! Such lovely, eye popping color.
Anyhow I haven't seen a drama with female rivalry as riveting as All About Eve. Let's see how this is goes.

Well those shoes and I can't help notice those legs! Both thse women are utterly sexy! I totally am up for some womance:D

No offense, but it's difficult to be dignified in pink stilettos, let alone 'little French maid' outfits. :side-eyes posters:

I like them... the pink stilettos make a great splash of color, the dignity comes from the women not the clothes :)

Beautiful women. That's all I can think of because I'm not being given anything to work with. Oh well, I'm going to watch anyway and I hope we get a solid womance out of this.

Ah, I'm so torn. I love Kim Sun Ah and I might just have to watch the first episode just for her. I'm having a hard time getting a feel for this drama too which makes it hard to build excitement/anticipation. On the other hand....I loved Kim Sun Ah's outfit and those shoes in the top poster. Man she looks amazing!!

What would my hubs think if I dress up like KSA, in maid uniform, pink stilettos, squatting next to the hamper? Hmmm...
Darn, this lady sure knows how to pull the fierce and sexy vibe in that simple pose.

the look like they are about to stand up and sing trot songs.

Looking at the top poster with the green backdrop, I didn't even recognize Kim Sun Ah. Wow does the short do look good on her. You go girl!

I had no intentions on watching this because I'm not one for female rivalry but if the tone is light and comedic, I might give episode one a chance. It's too early to say. We'll see what else they release before the premiere date.

She had this short hair in I do I do. Very good noona drama.

Well who wouldn't want to be like Kim Hee-sun? She looks amazing!

As a fellow woman, I am so envious of Kim Hee Sun. She's insanely perfect.

Am currently rewatchaing my name is Kim Sam soon
And I must say KSA is very missed in comedy , plz noona come back to your kingdom
And the maid poster gives Sam soon vibes a lot

Both of them look great. They'll give the young actresses a run for their money. Rise gorgeous women, rise!

Kim Sun Ah is so captivating. Her looks, absolutely gorgeous, not those just pretty, but beauty with an attitude. And she is such a great actress too.

I will be watching the premiere. I love both these women

When I first saw the title, I got super excited because I thought this was going to be like a woman's version of A Gentleman's Dignity, portraying The Woman Who Still Wants To Marry-esque female relationships. Seems like that's not exactly what we're gonna get, but I'm still excited for this show and will be checking it out!!

I'm so excited to see Kim Hee Sun all rich and classy( however brief that is)!!!

The first green poster gives me Secret Hotel vibes but so totally different for the rest. Pretty interested to see what the first few episodes will be like.

I definitely watch for them, as I knew both of them are great actress with their own ways of acting. They 're gorgeous and hope this show give some satisfied with their plots.

So far I am living this drama. Bok Ja is truly a twisted sister (unni) whichever. I am enjoying the Ah Jin & Jae suk tragedy because it shows how people don't always marry their soulmate. They get married for all the wrong reasons & the love doesn't last. It becomes more obligation than anything. Ki OK & Sung Soo are similar. For better for worse should apply after all the other parameters are met. Most people don't look at it that way which is why cheating happens. Either way, great so far. Even though this week July 14 is episode 9 & 10.