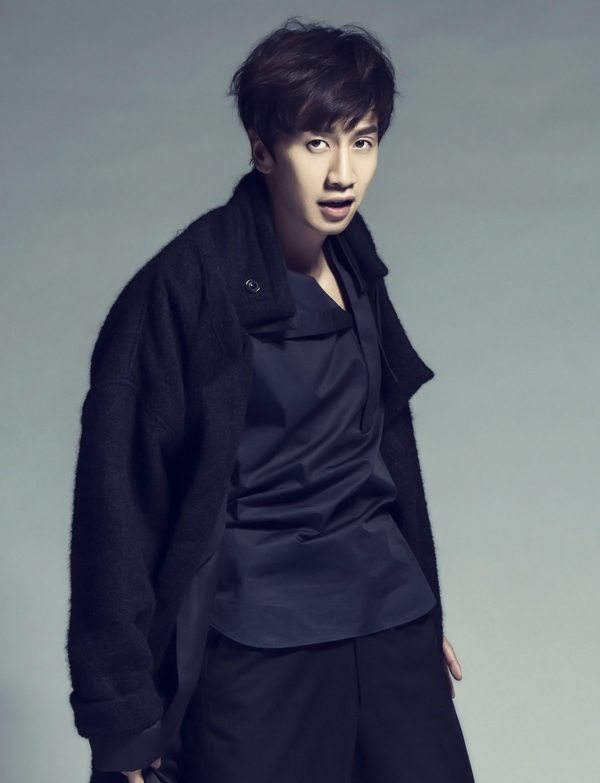 Lee Kwang-soo (Entourage) may be lining up his third drama with star writer Noh Hee-kyung, this time as a leading man after being part of the ensemble casts of her last two dramas, Dear My Friends and It’s Okay, It’s Love. There were a lot of things I loved about the realistic human drama Dear My Friends, but no one else made me cry as much as Kim Hye-ja and Lee Kwang-soo’s mother-son pair. I’m excited for him that he’s been offered a leading role, and that it’s in a Noh Hee-kyung drama; hopefully it’ll have the added benefit of erasing Entourage from our collective memories.

The new drama is called Live, and will be another collaboration between writer Noh Hee-kyung and PD Kim Kyu-tae, who are teaming up for their fifth drama following It’s Okay It’s Love, That Winter The Wind Blows, Padam Padam, and The World They Live In. An offer is currently out to Jung Yumi (Discovery of Romance) to star, and she’s considering favorably.

Live is about cops, but it’ll be a human drama rather than a police procedural or crime drama, with a focus on the daily ins and outs of police officers who work as civil servants and peacekeepers. I’m expecting to see the less glorified parts of the job, rather than the usual TV detectives who chase serial killers every day. The drama is said to include a cast of veteran cops and younger cops, and both Jung Yumi and Lee Kwang-soo have been offered roles as part of the younger generation of police officers.

I can already picture him being run ragged by his superiors and tripping over his gangly limbs out in the field, and then crying into his cup ramyun at the end of every day. If anyone is the poster boy for the pathetic underdog, it’s Lee Kwang-soo. He hasn’t even signed on, and I’m already feeling sympathy pangs for his character.

Live is aiming to air in spring 2018, though the broadcaster and time slot have yet to be determined.

Kwang-soo. My favorite giraffe in the whole-wide world! <3

So Running Man concert tour for Australia in july was cancelled for this??? because he will be busy filming the drama??

Noh Hee Kyung is the best k-drama writer in Korea.
I think she knows Kwang Soo acting well, and i bet she wrote the character thinking about him and his mannerisms.
Happy for Kwang Soo, he's really talended, his crying scenes are always on point (Puck, Hwarang, Dear My Friends and Confession) he's good at comedy but as a dramatic actor he's really amazing.

That's good to hear! I admit, I've never really watched Kwang-soo's acting projects, so I haven't seen him be more than just a goofball onscreen (I know his offscreen demeanor is quite different than his onscreen). I've seen snippets of his "serious" acting, but not enough to really have any judgments.

Oh yes please! I loved him in IOIL. I think he's a fantastic actor, but his height is an issue when deciding which female actress to pair him with.

Lee Sung Kyung would be good in terms of height difference (IF Jung Yumi declined that is) but there were rumors that they were a thing back in IOIL so that casting probably would never happen.

i don't think this will be a love or a romantic drama anyway, i think it will be more an human drama.

Anyway, I hope she worms in cameos for all our favourite old men and ladies! Kwangsoo deserves something where he won't get typecast and this is wonderful :D

Kim Kyu-Tae will be the director??? Isn't Him the Moon Lovers Director??? That guy loves the close-ups on actors faces lol.

Yep, It's Okay It's Love has crazy amounts of close-ups too but it worked that time, plus Jo In Sung looks even better zoomed in LOL.

I don't mind close up shot. At times, it helps to make viewers see all the nuance feeling actor has shown. but you have to do that at the right timing and flow it well.. He has no clue how to do that.

Ooh, yes. This sounds like an interesting show. Let's hope he takes the part.

I think kwang soo is a great actor nd underrated imo, I first saw him on RM nd I thought he was a comedian nd I heard abt him being in a drama nd I thought how am I suppose to take him seriously, I was thankfully proven wrong. He was one of the good things abt entourage, hoping he signs on nd im so proud of him for getting his first lead role

actually he was the lead in PUCK, THE SOUND OF HEART and COLLECTIVE INVENTION.

It's about time our favorite giraffe gets a starring role. Hope he doesn't become too busy for RM tho.

"If anyone is the poster boy for the pathetic underdog, it’s Lee Kwang-soo. He hasn’t even signed on, and I’m already feeling sympathy pangs for his character."

YES. Girlfriday, you said it so well. I'm so excited for this!

I'm not so excited to see Lee Kwang Soo as the lead here as I don't think he is so good as an actor even I love him in RM and not also for Jung Yu Mi's drama comeback. But I think Noh Hee Kyung knows what she is doing here, so crossing my fingers to see this drama later.

how many KS works you watched???

I actually think he is surprisingly good. He does comedy amazingly well, not surprising, but he also handles drama well too. I am looking forward to seeing him star in a lead role.

You should watch his works, he's a really good actor. His role in Dear My Friends was really heartwarming.

I have watched most of his drama, that's why I said it. If I haven't, I won't simply concluded it like that. He was quite good, but I don't think he is good enough to become a lead, not with Jung Yumi (if she confirms). He may surprise me later who knows. But for now, I'm still unsure about this. Anyway, I'm going to trust the writer to make it works.

Will Jo In-Sung be next? He is also friend with the writer?

like finally, i will love to see Kwangsoo in a lead role, i believe he can do a good job. his melo scenes are amazing. but the plot still doesnt interest me much ? & i dont think he & Yumi will be a good match, due to height differences & all. hmm.. maybe just cast either one of them? ? or maybe it's not a loveline between them? ?

I like Lee Kwang soo in RM. Havent actually seen him in a drama so looking forward to seeing him act in this.

Heol. I absolutely loved the writing for World That They Live In, didn't know she wrote It's Okay That's Love too. I'd better try to watch that, then.

Was The World They Live In that good? I keep putting it off because of Seo Hyo Rim.

I guess it's not for everybody... Even Javabeans stopped recapping it. But I love how realistic the main couple's relationship was.

holy, moly!! I just opened my twitter and saw this delightful news! Ive been waiting for him to land an actual lead role, and my wish was granted! He's not just talented, he's so hardworking in everything he do! And look where his standing right now? One the most riches celebs in korea, a lovable uri asian prince, and now he get an offer from a well known writer? That's why he such an inspiration and a good role model to me & my sisters.

wew, first leading man in Noh Hee Kyung drama. Become a regular cast in good writers project is not so bad after all...

I still haven't finished dear my friends, but kwang soo's chemistry with the actress who was his mother was so perfect. Loved how he played the urgency felt by a son who had an amnesiac mother.I have almost always seen him laughing and crying in RM's short clips lol, so watching him on screen and acting like an adult was such a heartwarming and refreshing experience. Can't wait to see him in this drama. Just hope it won't be as sad as DMF. It's depressing to take the sad pills all at once lol.

I like Noh Hee-kyung's writing and am a fan of both Padam Padam and It's Okay, It's Love. I think that this could be an interesting project for Lee Kwangsoo and I hope he accepts the role.

He should be soo excited right now and all of his family n RM won't stop tease him right after this news I could imagine it.
I'm so happy for him, he's been waiting this moment for a whole his life lol.

Haha, I also thought of his Running Man family teasing him about this. "Yaaaaaahhhhhh, we can't make fun of Kwang-soo anymore. He's a leading man, now!" *cue Kwang-soo's abashed face and "Oh shucks, Hyung!" But of course, he's secretly loving it.

This is great news!! He is a well known name, but has yet to headline a drama. I just hope the acting, writing and directing can all live up to our expectations.

I love and adore Lee Kwang-soo, but I'm drawing a blank because of the actress. I've hated her in both dramas I've seen her in. She's a good actress but her characters are so annoying. I don't know if it's the way she plays them or if that's the way her characters are written. Hopefully, this one is different. I love Noh Hee-kyung too.

Jung Yumi is definitely a good actress, but her drama choices might not always a good one and she didn't have that much of drama works since she focus more on movies.There's a reason why these annoying and flawed characters always go to talented actor, since acting a nice, charming and lovely character is not really challenging for them.

I suppose. I've just never been able to warm up to her characters.

I don't think I've seen Yumi in anything, but I agree that annoying characters are done so well when given to talented actors. If I find myself really annoyed by a character, then I know that the actor/actress is doing a great job of getting me to dislike them.

Daaaaaannnnggg, Kwang-soo. Lead role, huh? Good for him. He seems like a nice, cool guy and he's hysterical on Running Man (can't imagine the show w/o him). I hope this role will be more than the usual goofy character he always plays. I'd like to see different sides of Kwang-soo because I believe he's capable of being more than just an onscreen klutz.

Kwang-soo~~ I love him so much in RM and so far in all of his dramas. I can't wait to see him in a leading role! <3

Yeeees Noh Hee-Kyung is baaack! I miss her scripts so much... They are a jewel in a world with too many cliches.

Yay for Kwang Soo landing a lead role! If he accepts. One step at a time to catch up to his bestie, Joong Ki! hehe, in the acting world that is.

Lee Kwang-soo as the lead, with Jung Yumi as his potential leading lady? SIGN ME UP.