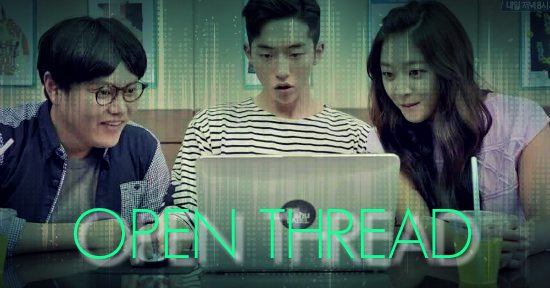 Here is your Open Thread, which is here for you to chat about anything you want, whether it be drama-related or not. Nothing’s off-topic here! Spoilers may be rife, so proceed accordingly.

Omggg I need someone to watch Forest of Secrets and discuss it with me now!! Fff it's hitting all of my investigative drama sweet spots and the mystery is so interesting already and the leads are SO CAPABLE AND AWESOME #bae

PLEASE HELP! I am in such a pickle! I recently decided to try and find the first k-drama that i ever watched but I don't remember the name of it or much of what happened! All I can remember is that the main characters met because he got into the cab/car that she was in as she was trying to leave. I think that he was in a suit and was important and I think that she MIGHT have been leaving a job interview (not sure about that though) but she was leaving a skyscraper with lots of glass. If this rings a bell with anyone please let me know! I'm going crazy and any suggestions as to what it might be would be greatly appreciated! Also, I'm fairly certain it was definitely made BEFORE 2014. If anyone has any clue, please please please let me know! Thanks a bunch!

Just want to make a plea to those of you who also watch Jdrama to watch one in particular - I only found it in the last few days. I don't speak Japanese or Korean for that matter, so without subs I get lost BUT I do like to hear the native language of original. It makes the whole thing come alive and seam real for me. So if you had told me to watch a Japanese drama (lovestory) where one of the two leads does not ever speak and communicates in writing or Japanese deaf signing language, and to add to that is only available in 640x360 (360p I normally watch 1080p!) with a few missing soundtrack problems in some episodes I would say "no chance". But do take a look at Say You Love Me - Aishiteiru to itte kure by Kitagawa Eriko. There is nothing cheesy about it .

...by way of addition, I am still watching this with three episodes to go. The acting, writing and direction is so compelling that I suddenly realised after 8 episodes"they" are only acting deaf or miming deap signing language! As if remembering your lines is not hard enough, you have to remember how to sign convincingly. I am divided between wanting to know how this drama ends and feeling hurt for any of the primary characters. I found this about the drama: "Aishiteru to itte kure(say you love me) is a hit romance dramam starring Tokiwa Takako and Toyokawa Etsushi with script by Eriko Kitagawa. Eriko Kitagawa is an immensely popular scriptwriter who has won numerous awards for scriptwriting. Her dramas are usually romantic and sentimental.

Aishiteru to itte kure was aired in 1995 and was the drama with the highest viewership that year. It led to a brief sign language craze. The theme song is 'love love love' by Drams come true, one of Japan's most popular bands. This single sold over two million and is the tenth best selling single in Japan.

In the middle of a bustling metropolis, how could it be that there is only one apple tree? No matter how much Hiroko jumps to try to pluck the apple, she cannot reach it. Fortunately, Kohji passes by and plucks the apple for her. Kohji is a rising young artist who because he lost his hearing at the age of 7, lives by only expressing himself through paintings. Furthermore, Hiroko is a young actress who practices acting with a drama troupe while holding a part-time job.

The two meet again and again in the park until one day, she learns that Kohji is deaf. Through their initial attraction, Hiroko begins to learn Japanese sign language in order to communicate with Kohji and as their relationship develops, several obstacles arise as well." Well, that's to put it mildly. As the episodes unfold there is a plot twist that looks like setting off a bomb, yet there's nothing far fetched or difficult to believe.