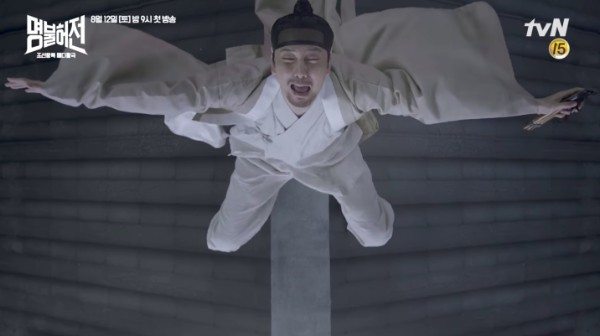 This new teaser for Kim Nam-gil’s (Shark) upcoming comedy time-slip drama Live Up to Your Name is hilarious. He stars as Heo Im, a genius acupuncturist from ye olden Joseon times who somehow meets a modern surgeon, played by Kim Ah-joong (Wanted), who is a firm believer in 21st-century medicine. The drama is about the hijinks that follow these two top-notch physicians and the clashes that happen because of their completely different medical philosophies and personalities.

Kim Nam-gil’s character is based on a real historical figure, Heo Im, who was a contemporary of the better known Joseon medical man Heo Jun. However, this is a highly fictionalized fantasy version of events, including time travel and secret double lives. Heo Im is a doctor of oriental medicine never allowed to rise in rank because of his low birth status.

Jaded by the world, he preaches common sense and status quo by day, but because of his god-gifted talent with needles, he’s allowed to become the king’s personal aide by night, amassing a small fortune for his treatments. By some strange circumstance, he travels through time 400 years later to present-day Seoul, where he encounters a new world.

I’m just super glad that Kim Nam-gil is back in dramaland, and he doesn’t disappoint in this second teaser. Charismatically, he slowly opens his eyes in a dramatic fashion, and we see he’s on the rooftop of a palatial building. He throws out his arms and announces to the sky: “I, Heo Im, will return to protect Your Majesty’s health.” Dramatic wind and music underscore the moment. Then suddenly his expression changes to one of futile helplessness and tears, and he starts bawling, “I want to go baaaack!”

The screen zooms out, and we see two present-day security guards looking confused and calling the authorities to report that there’s a crazy man on the roof of an old historical monument. Kim Nam-gil’s bowing and flapping can be seen from an Emergency Room television that’s set to the news channel, with the underlying caption that says, “Cultural monument trespasser arrested.”

The anchor’s voice in the background says that the culprit is currently insisting that he’s a Joseon citizen. Then we finally catch a glimpse of Kim Ah-joong as she glances up at the screen, sniggering at the preposterous news story. Her voiceover closes out the teaser saying: “Miraculous and talented him and her. Live Up to Your Name.”

New tvN time-travel Saturday-Sunday drama Live Up to Your Name begins on August 12 after Forest of Secrets. 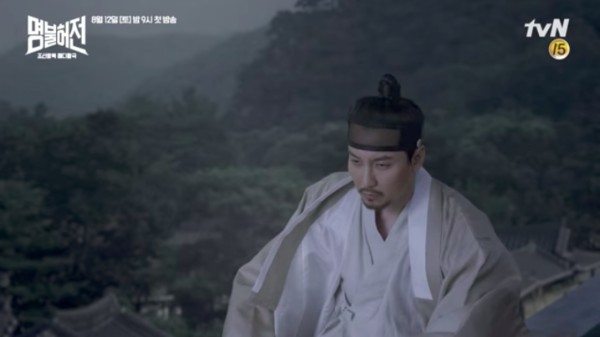 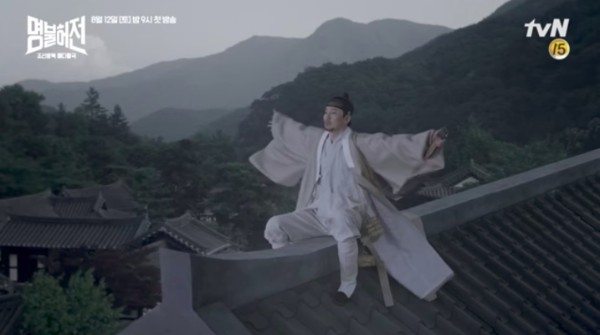 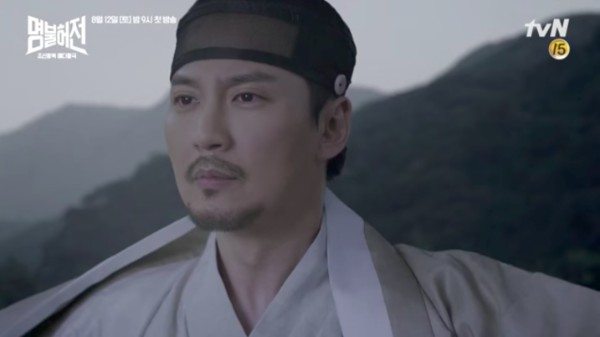 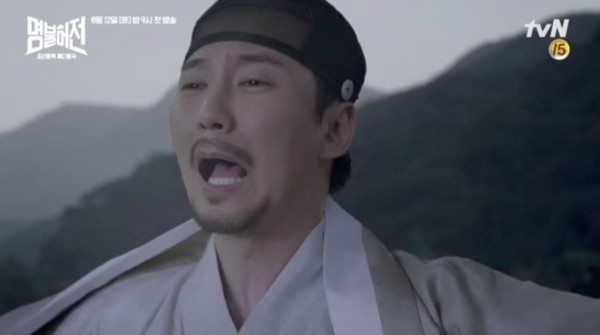 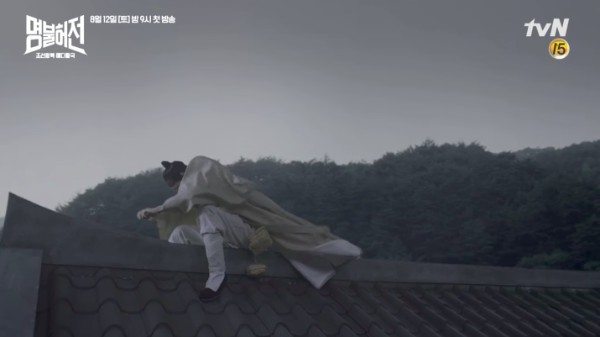 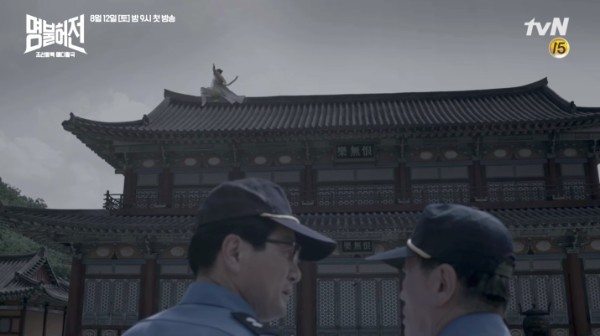 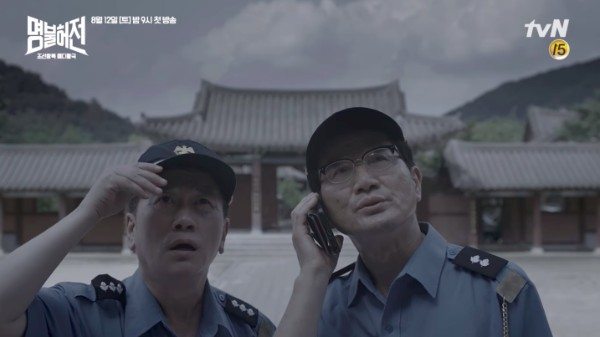 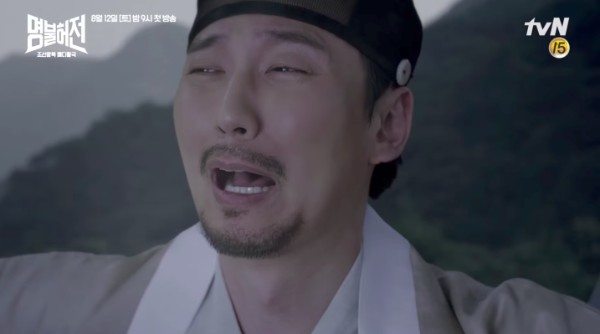 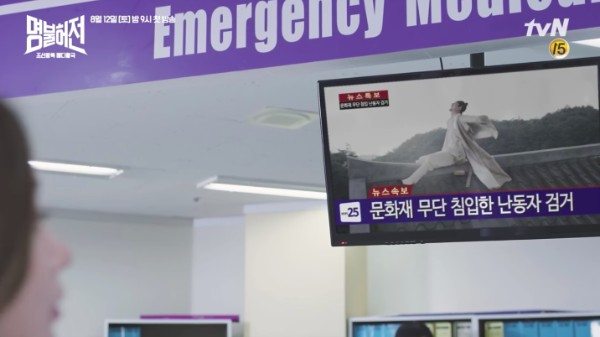 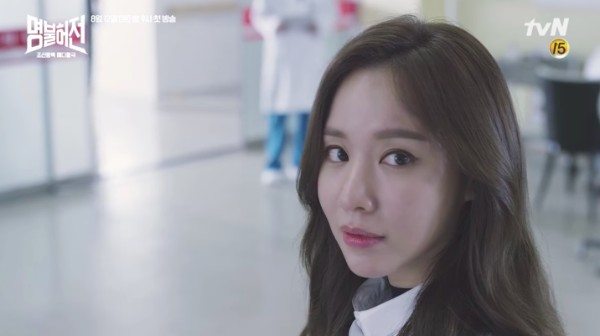 I laughed so much while watching this teaser! I'm immediately curious about this drama and the other teasers that will come lol

TvN is blessing us with the male leads in their dramas this summer.

So that's what my Heo Joon looks like when he grows up but not when he's old.
Wonder if that woman whatever is the person who he spends time with before reuniting with his "persimmon".

Note : All these references are about the drama "Mirror of The Witch" which had Yoon Shi Yoon as Heo Joon before he became the one known in history.
The drama is great btw, although a lot of people hate the ending :P

i'm still laughing -- i will look forward to seeing Kim Nam Gil return, but this time in something FUNNY and not dreary!!!
*sighs with relief*

I think I am going to have to give this a try...sold after the teaser!

8 Ace in the Trap

Why he die. actually?

He usually dies at the end of the dramas

I start to laught reading ur comment 😅...but its true...he died in nearly all his series and movies 😧

I hope KimAhJoong will be good, please.. please..

I don't recall seeing Kim Nam-gil do full comedic, hilarious acting. It's always been serious, melodramatic stuff ..... which he can do, by the way. But anyway, this is a new side of him I've never seen and it sure is interesting!

in Queen Seon Deok, Bidam was really fun when he first appeared. Then the layers started peeling off as the show progressed.

Try to watch Pirates that is comedy and he makes you laughed.

who is the writer?

no track record then..

LMAO. Looking forward to this

This looks very promising. The setup reminds me of Rooftop Prince, but with a medical bent. I hope the execution is loads better. *adds to list of upcoming dramas to watch*

I'm hooked. I will be waiting for this drama

18 Fatcat lost her way while on semi-hiatus

This is hilarious!! They better have more of such comedy in the drama, I'll surely watch it lol

Kim Nam Gil that I know only play a baddas melancholic gangster...never know he can pulls a funny role like this. Looking forward for this drama!

Wow, the line of Chungmuro actors from Lee Je Hoon (Tomorrow With You), Yoo Ah In (Chicago Typewriter), Jo Seung Woo (Forest of Secrets) and nowwww.. we have Kim Nam Gil! Although both Lee Je Hoon and Yoo Ah In had no luck with their drama (low rating) but their drama are still the good ones. Hope this drama will be good too!

I'm sorry but what is Chungmuro?

He looks hilarious, flapping on the roof and having a meltdown. :D I'm kind of excited to see this!

Thanks for the update, tineybeanie!

The stills and teaser look great. The things people will do to accumulate ch'i. LOL! KNG makes the cutest cupola. ;-)

Keeping my fingers crossed that Heo Im lives to a ripe old age.

Korea's equivalent of Hollywood. So if someone says they are Chungmuro actors, they are film actors and not tv.

This was a reply to @bqk318. For some reason it didn't post properly.

Teaser looks nice enough. Like both the leads, and hoping this doesn't disappoint.