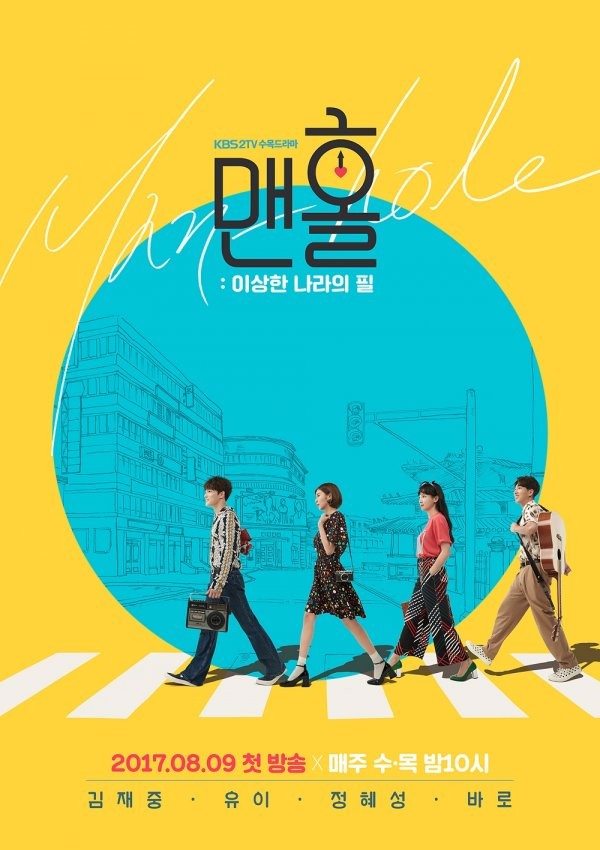 I can’t wait for Manhole to come out. Before all the promo, I was pretty ambivalent about the plot and the cast, although I’ve come to really like UEE (Night Light) as an actress after Marriage Contract. But with each teaser and still, I’ve grown to anticipate this late summer drama the most. The newest round of character posters have been released, and they’re so funky bright. I mean just look at that Beatles-themed poster—doesn’t it make you want to watch too?

Manhole is a time-slip comedy about an unemployed man, played by JYJ’s Jaejoong (Spy) whose best friend, played by UEE, is getting married in a week. The only problem is that she’s the woman he’s had a crush on for the past 28 years. So when he accidentally discovers that a manhole in his neighborhood is a portal through time, he uses it to try to prevent her wedding and declare his feelings.

Hijinks ensue when he finds out that changing even the most minor thing in the past leads to huge effects in the present, and he has to go back and repair the damage. I love his expression in his poster. With crazy eyes, Jaejoong says in his character poster: “You think you can marry a man that’s not me?” His face shows exactly the bae-you-gone-cray feelings I would have if I were ever in that situation.

Meanwhile, UEE looks completely oblivious to his feelings, as she smiles brightly and asks in her poster: “You’re coming to my wedding, right? You’re my best friend, you know?” Baro (Angry Mom), who plays Jaejoong’s wannabe rival, clenches his teeth with a determined look, while his poster reads: “No matter what, I’ll win over you. If your life is ruined, my life will be a success.”

Last but not least, we have Jung Hye-sung (Moonlight Drawn By Clouds), who will be UEE’s rival. Contrary to her smiling expression, her poster reads: “Going on a blind date? Bullshit! Going on an arranged matchmaking date? Bullshit! Now you’re getting married?!” 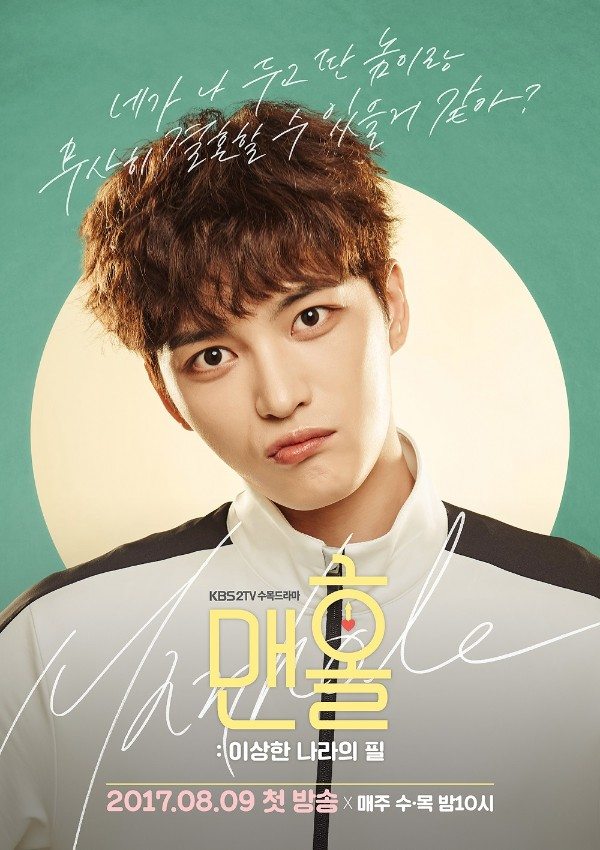 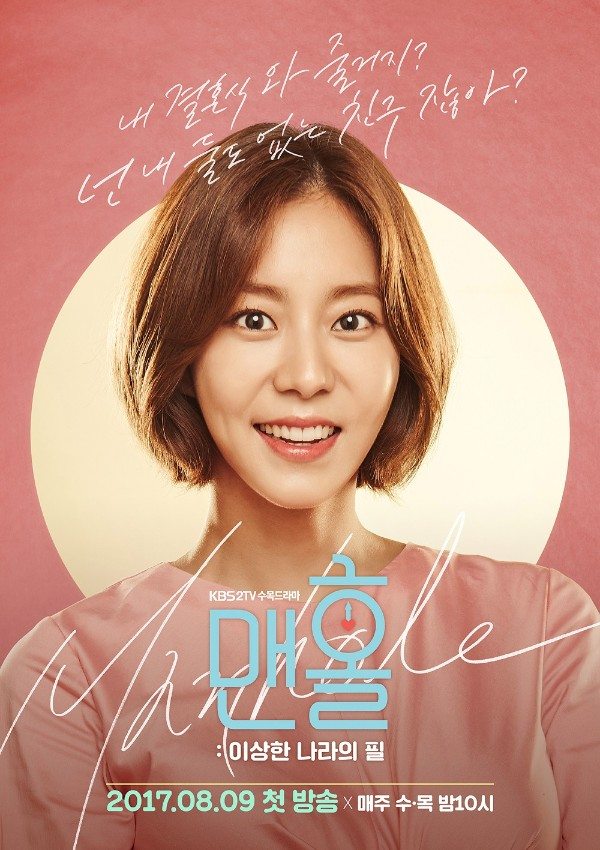 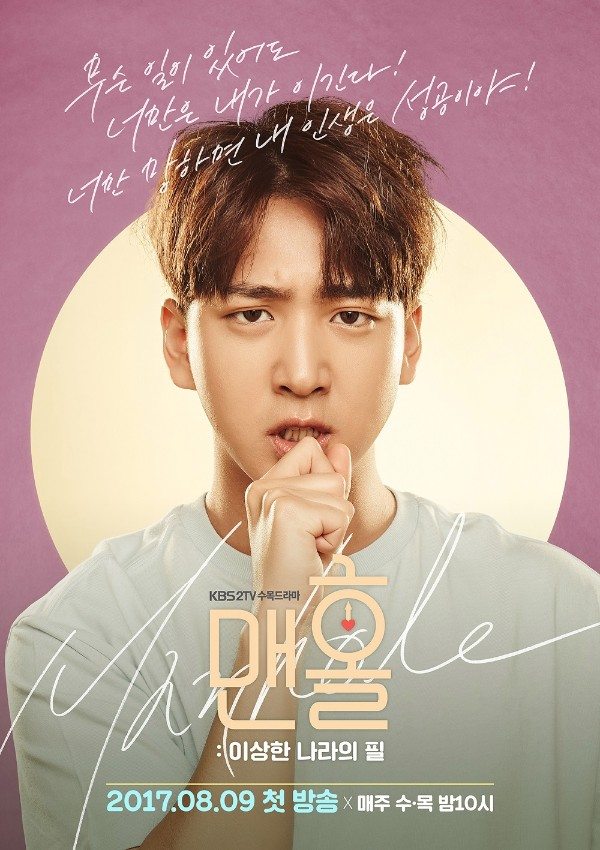 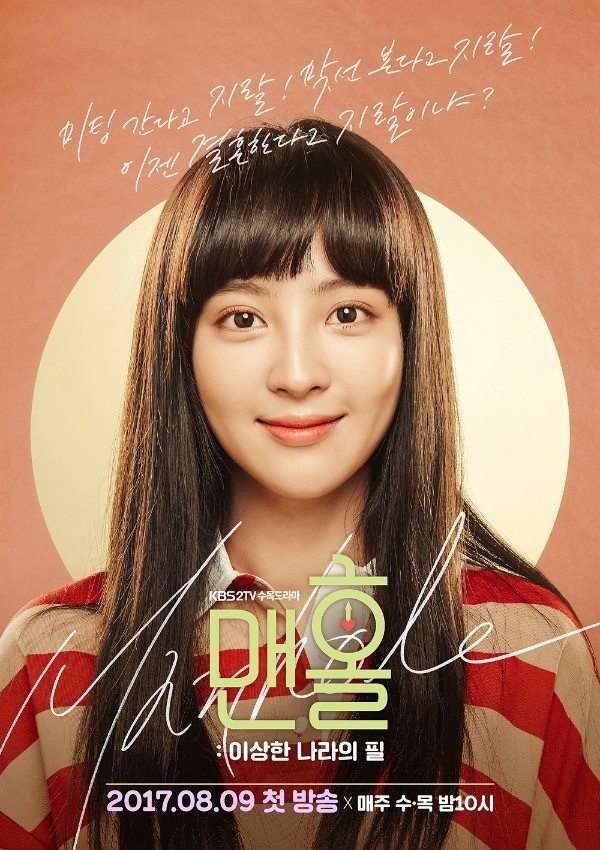 Love the bright posters. Will def check out this show. ?

I don't even plan on watching this show (yet, since I've given up on romcoms for the time being) but I am enjoying the hell out of these promotional materials. So cute and fun.

I'm really digging the vibe they're portraying for this show -- please deliver! I just want to end summer with a light, fun show.

I'm really liking the design style and direction of the posters. Really amps up the quirkyness of the drama.

The production team are really nailing the aesthetic - love a bit of retro colour blocking!
Gah, I'm undecided - as cute as the promos have been so far, I'm hesitant to pick up yet another 'time slip' show after The Best Hit and currently Reunited Worlds. Is it just me, or is Korean TV's obsession with time travel getting a bit repetitive?! ?

I agree about kdramas being way into time travel recently, but the PD of Reunited Worlds clarified himself that Reunited Worlds has absolutely no time slip involved in it.

I'm loving this drama's promotion. So bright and cute and fun. Let's hope the drama itself will follow suit.

Loving everything about the promotions for this drama! The funky retro aesthetics for the posters, trailers, and even the costumes are definitely doing their job of making me curious about the show.

I had no desire to see this, but the wacky fun promotion has won me over to at least check it out.

First poster is sooo pretty! Loved how all posters repeat the "hole" ^^ Will he go back as far as the 60's then..?

One of the drama that I am anticipating. I love love love UEE but truthfully I am having Jung Hye-sung fatigue. I don't dislike her but I wish it was another actress just to see a different performance of a 2nd female lead. I know she is good and she delivers but it's just me that wants variety. It will also be my first time travel drama as I did not watch the others (Best Hit, Reunited Worlds, Tomorrow With You...)

11 Fatcat lost her way while on semi-hiatus

Love the burst of colours in the posters. It somehow gives me the retro style vibe.
Also the first poster reminded me of the manwha "cherry boy, that girl" :-P

Oh yeah. Hopefully it won't be anything like 'Cherry Boy, That Girl' though.

Something tells me you didn't like that manwha ?
For me, it was kind of weird, I'm sure this drama is going to be nothing like that?

Sounds like a good watch! The synopsis reminds me of "Operation Proposal"

My anticipation for this drama is wayyyy high right now! Having watched like two dozen dark, serious thriller/crime shows in recent months (they are all excellent, of course), I am in dire need of watching something funny and wacky for a change! These posters are just perfect like the two trailers that preceded them hahaha! The four leads were spot on with their facial expressions mirroring their respective persona and those one-liners really crack me up! I haven't seen such top notch promos for a comedy in a long long time, whoever was in charge of these is a genius xDDD!!!

I agree. God knows how the finale of Seven Day Queen will be. We'll need something to help us recover.

Ha, you can see the rage in Jung Hye-sung's eyes.

All the promotional materials have had a bit of an offbeat, quirky vibe, which has been interesting. Let's see if this transfers over to the show. Will check this out and give it a try.

Has Kocowa monopolized this one also? I'd like to watch it, but can't with all the buffering and Kocowa having no Roku app. Grrr!

Hmm... it's a KBS drama, right? So, yes, probably. Unfortunately (?), KBS is among the 3 broadcasters streaming on Kocowa (KBS, MBC and SBS). And just when I decided to pay for subscriptions to Viki & DF :/

The Butterfly Effect without the doom and gloom? My Best Friend's Wedding without Julia Roberts cry-smiling? I am allll over this!

Love them ? !!! Especially the main poster! These posters have character, artistic direction, and tell me a story … which compels me to find out more about them. Yay! ?

I'm excited to watch this show.