The housemates reunite for Age of Youth Season 2 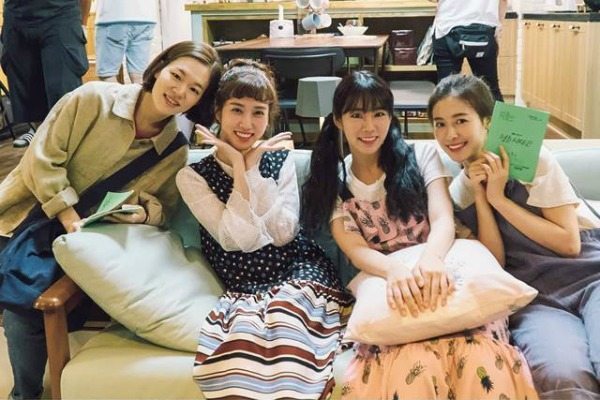 Aww yeah, we’re finally getting the Belle Epoque crew back together for their second year, almost a year to the day of wrapping its first season. Season 2 is set a year after we last left the girls, coinciding almost perfectly with the actual airdates: The first season wrapped on August 27, and this new season will open on August 25.

There are a couple new faces in the mix, too, and while it’s too bad we won’t get to see some of the same actresses back for Round 2, I’m still really looking forward to this season and am ready to welcome all of the additions to the cast. In the still above, pictured are four of the main housemates at the Belle Epoque share house, who are:

Han Ye-ri as the taciturn eldest of the house, who has by now graduated and has successfully joined the workforce; Park Eun-bin as the bubbly glue of the household who has a roving eye but zero dating game and is, as always, desperate to score a love life; Han Seung-yeon as the naive one who survived an abusive relationship last season, who took a year off from school, and is now back; and newcomer Ji-woo who is replacing Park Hye-soo as the Eun-jae character, who was the maknae of the house and has suffered the first heartbreak of her life.

I’m super bummed that this means the adorable maknae-and-sunbae romance came to an end, but I’m clinging to the hope that with the sunbae actor (Shin Hyun-soo) slated to return, we’ll get a Persuasion-esque reunion storyline. A girl can hope! And while I know it’s very strange to have a new actress playing a familiar character, I’m keeping an open mind about Ji-woo since I think it could work in this kind of story. Moreover, the producers explained that Ji-woo was a finalist when casting for the original Eun-jae, so she must have a lot of qualities that they saw in the role from the outset.

Then in the still below, we have one of our new additions, model and rookie actress Choi Ara, whose character is brought to Belle Epoque because of a particular letter. Looks like we’ll be retaining that air of mystery that was a fixture of the first season, woven in between all the roommate antics and bonding storylines.

Age of Youth 2 will follow Woman of Dignity in JTBC’s weekend timeslot, and premieres on August 25. 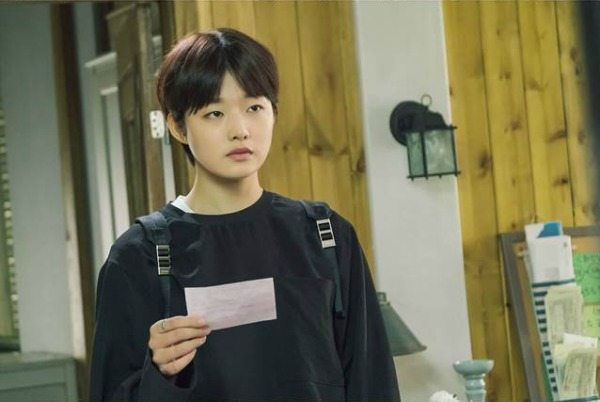 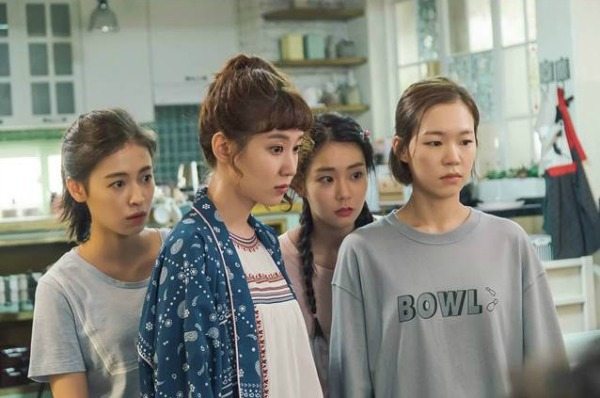 I want to watch it but at the same time I don't want to. Maybe I should just wait till 4th ep or so.

Why you don't want to watch? Because Ji Woo?

Aka Error. I have till 7 whole episodes to go- yay me. xx

I think it'll be a bit weird to see different actress playing Eun Jae, but I'm not gonna put a lot of expectation on this season. I'm gonna watch this drama with an open mind.

I think that's the key to a successful watching experience–to go in with an open mind and little to no expectations. It doesn't always work, but it also doesn't hurt to be open-minded and give things a try.

Really expecting this drama, I curious will there a 'mystery' just like the ghost in first season?

I think the first few eps might be a bit weird with the new Eun Jae but sinc I'm excited with the stills, I'm keeping an open mind and preparing myself well to adapt to the changes. Oh well, if you can't beat them, join them. This is one show I don't want to miss.

I'm honestly so glad that we are being treated to a second season that I'm willing to overlook Eun jae's actress. I'm sure she'll pull it off if we don't close our minds. Tho I'm a bit sad over Yi Na's character since she was one of my faves, she was such a badass.
The chef that our eldest was dating won't come back?
I'm very intrigued about how HSG will cope with her trauma and if it will affect her life in college and also about the role the newcomer will take in the Belle Epoque crew.
Since Age of youth I haven't found another drama that touched the strings of my heart like that, the way the episodes were narrated always left me with something to think afterwards. I grew attached to ALL the girls.
Will wait patiently.

Oh yeah, Kang Sunbae was my fave outta all the Belle Epoque girls, so needless to say, I was super bummed about her storyline ending. I'm trying to get over it, but it's gonna be hard when she shows up for an episode or two and then leaves us for good. Too cruel, Show.

Cutie boy chef better come back! They were both so cute. Here's to hoping they stayed in touch all this time because the way he was totally smitten with her was way too cute and their relationship was cut too short.

Ye-eun was one of my least favorite outta all the girls, but the way the show left us with her character immediately made me much more interested in her. I'm definitely interested to know how she's doing and how she's coping with her trauma.

I think this season is gonna be an emotional roller coaster ride.

I am surprisingly ok with the other actress playing Eun Jae's role, for now. Might be because she is exuding the right vibes in those pics. And I remember Ji Woo from You're All Surrounded where I found her very good, so I have some confidence and hope in her ability to pull off the character. It's naturally an off-putting idea at first, but it can be done.

I need this to be good because while the first season was a true gem even as a standalone, it didn't necessarily feel like an all-around complete story.

Yep, saw Ji-woo in You're All Surrounded, too. Even though she was a fireball, she also had a lot of feisty spunk and was very charismatic. I'm hopeful for her take on Eun-jae.

So looking forward to this! But, will definitely miss the adorable romance and park Hye soo, but it's hard to see second seasons in kdramas, so I ll take whatever I get! Also, curious to see how Han Seung-yeon's character has coped up after a year, since the ending made it look like she had not overcome her trauma. Also, jtbc has been consistently doing well this year, so hope this drama does well too and that it's good. Please be good.

And good luck for the exams! Hwaiting!

The will mark the first season 2 of any kdrama I've watched. So I'm reasonably excited even though I'm a little bummed all the original girls didn't come back.

I want a good and fun romance for Park Eun Bin's character! Watching her flail over it would be too fun.

I'm still a little scared, but also extremely hopeful for this season! The stills alone are already giving me s1 vibes.

I loved how the first season was focused on the girls and not so much the guys that surrounded them but I have to admit, the actors that are gonna be in the second season are making me excited!
Ahn Woo Yeon (still suffering from Circle withdrawal so yay!), Kim Min Seok (is always a cutie), Onew (let's hope he can follow up after the DOTS hype, fighting!) and of course Sohn Seung Won (who I'm glad came back for the second season because his love-line never got a chance in the first one).
What about Yoon Bak though? Isn't he coming back for a reunion with sunbae?

Despite the major casting changes, I'm still very much excited for s2. Honestly, I didn't like the idea of having Eun-jae replaced by another actress, but I also didn't really like Park Hye-soo all that much, so I'm now very much welcoming the idea of having Ji-woo take over the role. I have faith that she'll do it justice, and maybe even add a little extra oomph to it, too.

Other than that, I can't wait to see all the familiar faces and excited for new faces, too. I'm already interested in Choi Ara's character and her acting. I like her character's tomboyish looks, based on the stills. I'm also excited to see the return of the oppas! I already miss Shin Hyun-soo since Ruler ended, so can't wait to see tall and handsome sunbae again! Also also, can Ji-won and her sunbae pick up where they left off? What was that little tease of her sunbae suddenly looking at her with heart in his eyes and sweetness in his voice? I need more of that, please! Do not tease meh, Show!

I am so psyched for this. But also not. Because Park Hye Soo. And Sunbae. And because i truly truly hoped for season 2. But then this is what they did to me.

Ji Woo kinda resembles Park Hye Soo, but a lot more bubbly looking, and a different air of innocence. But I'm not so sure how I'd feel about her playing PHS's character. I'm more inclined towards having her playing a new housemate

Ahhhh, I really can't wait for this. Age of Youth has such a warm place in my heart. How the girls bonded throughout the first season from reluctant roommates to true friends, in the simplest of ways, through everyday trials and hardships really touched a spot in me. I love this type of slice of life where the bond between women is the center of the story. I laughed and teared up in equal measure while watching the first season and I can't wait for the second, new additions and all.

So so so stoked to see Park Eun-bi and Han Ye-ri back and I can't wait for their storylines continue!

I loved Age of Youth, and I think it was a lot more open-ended than her other shows so I'm glad we're getting more of it...but I almost wish she were doing something new. I shouldn't take Park Yeon-seon writing anything for granted (nor her working with the likes of HYR and PEB), but at the same time I'm feeling more curious/anticipatory about what she'll do after this show.

I wanted a second season for this show so bad I think I'll take whatever comes. The trick with second seasons (at least in my opinion) is to remove them from the first and judge them on their merits separately. So my mind is open for whatever may come~

OMG I still haven't watched season 1 with 4 currently airing dramas on my plate. I wish I had Naruto's ninja skill to split myself

Does anyone know a website that has english subs out yet?