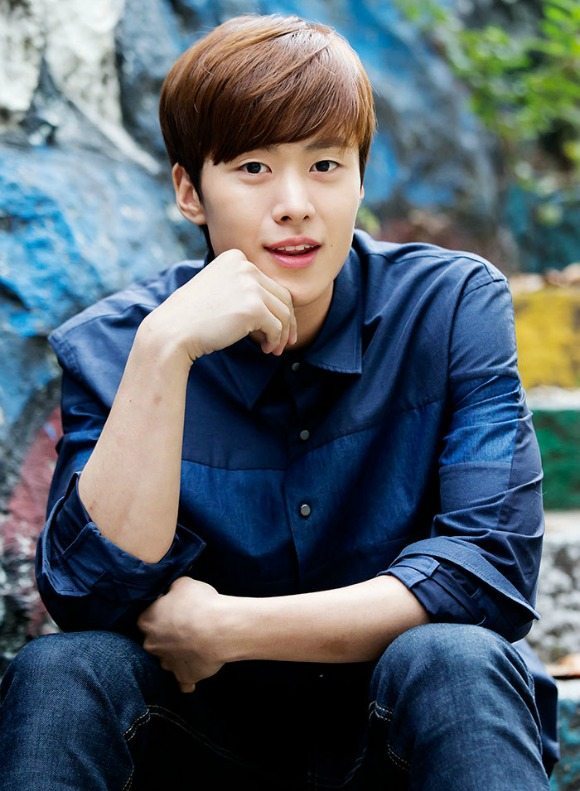 Do they mean to cast this role ironically? Because when I think of Gong Myung (Bride of the Water God 2017), wonder kid genius professor is not exactly the first thing that comes to mind. He’s currently considering an offer to star in the new KBS drama Mad Dog, which is about a special investigations team made to catch white-collar criminals that specialize in insurance scams. If he signs on, he’ll be going to work for Yoo Ji-tae (The Good Wife), who has been offered the role of the Mad Dog team leader.

The new series is a cat-and-mouse chase drama, except here the metaphor is dogs chasing cats—more specifically, the Mad Dog team of investigators who will hunt down the “copycat” criminals who repeatedly use the same scams to defraud people of their hard-earned money. It promises sensational thrills and large-scale insurance cons based on real-life crimes. Yoo Ji-tae is being courted to play the leader of the investigation squad, a veteran detective with twelve years of experience and a near-perfect track record for catching the bad guys.

Gong Myung is up to play a leading role as Professor Kim, a young geeeeeeenius who has a degree in physics from The Technical University of Munich, a master’s from Oxford, and is a professor of psychiatry at Yale School of Medicine. I’m trying to keep a straight face, I swear. The character is an expert in the human brain, and he’s handsome and athletic to boot. On the Mad Dog team, he’ll use his exceptional skills to analyze and solve cases that detectives with decades of experience can’t even crack, and they’ll be forced to acknowledge his abilities.

I actually had positive things to say about Gong Myung when he played cute puppy dog characters in Entertainer and Drinking Solo, and I heard he was good in the mini-drama Individualist Ji-young too. But his recent stint as a wind god in Bride of the Water God 2017 often has me cringing, because he makes a mighty deity seem like a whiny teenager, which I don’t think is intentional. I can only hope he’s better sticking to human characters and will fare better in his next drama. I just have this image in my head of Yoo Ji-tae facepalming at every Mad Dog team meeting. Who knows, maybe it’ll be a light capery comedy and I’ll have worried for nothing.

Mad Dog will follow Manhole on Wednesdays and Thursdays beginning in October.

"has a degree in physics from The Technical University of Munich, a master’s from Oxford, and is a professor of psychiatry at Yale School of Medicine" When did he start studying ? In his mother's womb ?
I can't picture Gong Myung as a genius he's too... puppy-like.

He is too puppy-like. I think he has a potential as an actor, but for now I can only see him in puppy-ish role. I just can't buy him as a professor.

he's way too perfect as slacker brother. Anyway let's see what will happen

He's an expert in the human brain, too...reminds me of Jang Hyuk Oppa in Beautiful Man. But Oppa is no puppy, he's a lion...rawr!

Here she goes, raving about her new Oppa!

*Screams in shock* Why are you here?

Oppa is our lion!

lol Beautiful Man. The title supposed to be like that: Beautiful Voice, Shine or Go Beautiful.

I wouldn't mind taking a college course from Professor Puppy.

I lauhed so much I am coughing. Thinking of all the post doc people I know who went to Harvard and Yale... and then we have the Kdrama genius who just apparently did swan in to be their professors for Medical school. Gotta love the delusional writers. And the Korean genius however good looking or young or a child prodigy can't do it in that Kdrama timeframe.

Aw, he was amaaazing in Individualist Ji Yong! Sad that he/his character isn't doing as well in BOTWG.

But I think of the 3 I've watched in that acting group 5urprise he's in with Seo Kang Joon and Lee Tae Hwan, he seems to be the most talented so far

I like Kang Tae Oh as an actor the most in this group. It's sad that their agency doesn't really promote him. Gong myung acts well too & compared with the other two, he is better.

Because one of his daily dramas aired over there and his popularity in that country surged to new highs that it's no joke.

That was not a kdrama, right? I know it was something like co-production drama between Vietnam and Korea.

I hope he will get more exposure in kdrama. I'm watching him now in You're Too Much and I think he has a potential to grow bigger.

Ohh, Kang Tae Oh was in Twenty Again as the young Woo-Chul. That's the only time I've seen him and that role was too short. Seems like it's the 3 who are being promoted heavily

I agree for Kang Tae Oh ! He acts more in daily and makjang-ie weekend dramas. I want to see him in a mini-serie for once.

Hopefully his next project will be mini series.

LOL one of Noryangjin idiots suddenly become genius professor in a year!

Well that was a mental image I didn't know I wanted to see.... but did.

I know they may make him older in the drama but... a 23 y.o. with a PhD? Not only that but at professor level? And also whilst managing to do such a change of subjects between bachelors and professorship? o.O

Also wow, random shout-out to TUM, you don't see that every day in a drama

Yeah... Now they cast 20 years old actors in this kind of role. Let see if they will make it believable.

LOL they need to keep it realistic esp when casting such a young actor. I think going with Oxford/Yale graduate is enough to give off genius vibe.

This BABY as a professor? Haha, just kidding. We are the same age and I can't imagine myself as one right now.

Anyways, I think he is incredibly cute and I've always wanted to watch something with him, but Bride of the Water God doesn't seem really interesting. Is it worth watching for him?

Nah, his scenes in Bride of the Water God so confusing to what, every time his character try to do something, other characters stop it.

I read about it too. I'm excited to see Yoo Ji Tae back, but I'm not so sure with all these castings. Hwa young was good in Age of Youth so hopefully she has something more to offer. I don't really buy with her acting as a bratty youngest child in FIS but I'm liking her character sometimes lately.

Glad somebody is trying to keep a straight face.

I can't manage it when I read sentences like that. Love the DB writing style.

i actually think he acted ok compared to the other 3 in BOTWG, its just that his character essentially goes nowhere or seems to do random things for no reason which is just poor writing not poor acting .....

... but yeah phd + professor + expert in human brain + good looking + athletic + rich ---> kdrama writers need to chill a little .. this is reminding me of kang cheol of W

It's like writers want to create the perfect in term of competence but it sounds so unrealistic that's not convincing haha.

LoL, even Kang Choel was never that perfect, he's also a webtoon character.
However this guy suppose to be real, right..

a degree in physics from The Technical University of Munich, a master’s from Oxford, and is a professor of psychiatry at Yale School of Medicine. I’m trying to keep a straight face, I swear. The character is an expert in the human brain, and he’s handsome and athletic to boot.

Now they're just being ridiculous. Is he supposed to be perfect?? Characters have to have some kind of flaws

somehow I need a character like SeoDongJae. Full of flaws yet still attracted me to watch him.

I haven't absolutely hated him in Water God, but he hasn't done anything for me, either, and it would take a very great deal of something (brain transplant?) for me to buy him as any kind of genius.

I actually love Gong Myung in BOTWG. In fact, I think he's acting circles around the leads. I love watching him go from grinning like a devious little boy to scowling like a demon. His character is just petulant and self-absorbed, which isn't palatable for most. I don't know how he would perform as a geeeeenius, though.

HA these specs makes want to bury myself and forget about finishing my humble bachelor degree.

good project does make alot of difference for bringing the best in actor. he was really put a decent performance in individualis jin young, and wonder why he is not put an equally good performances?

" I just have this image in my head of Yoo Ji-tae facepalming at every Mad Dog team meeting."?OMG woudnt that be awesome!
Why cant dramaland have regular graduates rather than geniuses????

I don't want to see him wasting space in a drama with Yoo Ji-tae, which I'm eager to see. Gong Myung's limited, and a pretty mediocre actor. He was fortunate to be given some simple roles where he didn't have to do anything before, but BOTWG has shown he's pretty terrible when it comes down to it.

Getting tired of seeing actors coasting off their visuals when their skills lag far behind and are mediocre at best. Give the role to someone better. There's plenty of actors.

all i can imagine is Park Bo Gum take this role

I wouldn't be mad at it... (But I think he has too much sense to take a role with qualifications that outlandish)

how does one become a professor of psychiatry when he had a degree of physics? am i too dumb for this/

I don't think I agree with girlfriday on this one. Im happy myung has a lead role and i think we should give him a chance to try something knew. Hey, he just might surprise you. You'll never know *shrug