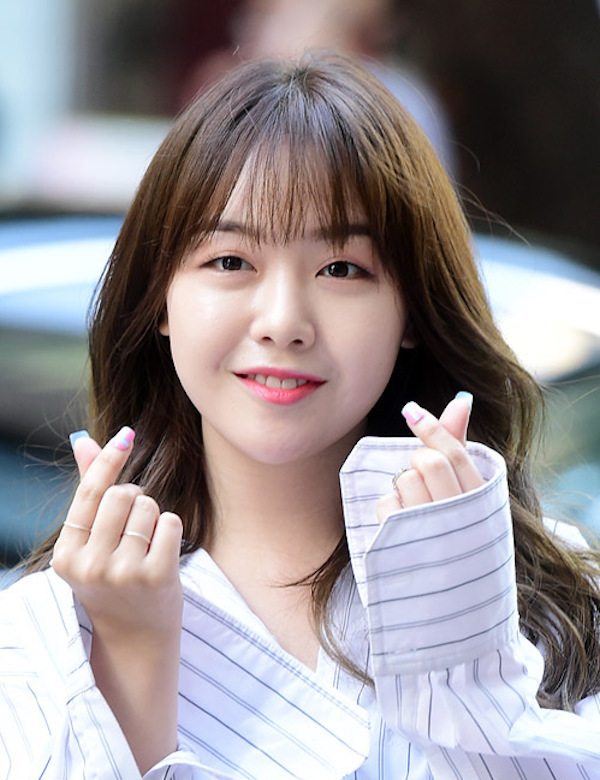 I didn’t know what to expect from Girl’s Day Minah, but her splash debut through Beautiful Gong Shim was a refreshing surprise. I found her to be extremely relatable in her daily struggles and even in that hilarious wig, which is why I was pleased to hear that she’s considering a new drama project, I’m Not a Robot, which is about a young man who falls in love with a robot.

She’s still only in the early stages of reviewing the script, but I hope she confirms because I think she’d be awesome at this role: The character is described as a young woman who has strong athletic skills but a low IQ of 94, and while inside she’s feminine, nobody sees that. She grew up knowing everything about cars because her father owned a mechanic’s shop, and she plans on opening up her own establishment. She barely entered an athlete’s college using her judo martial arts because she’s no good at studying. But her optimistic personality helps her get along with people very well, and she’s the type of person who can’t pass by an injustice unnoticed. Lastly, although she can’t cook, she’s No. 1 at eating and drinking. Wow, that’s exactly the type of girl I’d want to be friends with.

The question is how her character works with the premise, since it doesn’t sound like she has anything to do with robots, cyborgs, or androids. The articles state that she’s up for a leading role, so perhaps there’s another lead, or maybe we’ll get a birth/creation secret somewhere?

MBC’s I’m Not a Robot will air in October, following the end of Hospital Ship, Ha Ji-won’s upcoming medical drama.

Via Xports News, IS Plus

Tags: I'm Not a Robot, Minah

Omg this sounds perfect for her. I would LOVE to see a female mechanic as the lead in a drama, that sounds awesome. This actually has me thinking of the book Cinder by Marissa Meyer. Cinder, the main character, is a mechanic and a cyborg. Maybe there will be something similar with Minah's character,

Ahhh I love Cinder!!! Such an amazing book with a badass heroine! And a charming prince;)

Yesss! The whole series is just so entertaining. I love it. :) Marissa Meyer knows how to write fun books.

She does! I love the whole series too! All the characters are so fun and interesting. It was hard to put it down! ?

Ah Cinder!? This is making me want to re-read the whole series!

I loved her as Gong-shim, she was so adorkable, would love to see her in a drama again but what happened to the fallen-angel drama? Wasn't she considering that?

She was amazing as Gong shim! The comedy there was gold! ?

It was and that wig, so hilarious!

The wig was the best part about her!

Was kinda bummed when she stopped wearing it at the end. The awkward wig completed the Gong-shim character, imo.

Bwahahaha! End of ep one! He comes out looking like Cleopatra! Aw, man, I died laughing! XD

"what happened to the fallen-angel drama?" I liked the story when I saw the DB post previously , hoping to have more news about it :)

Yes, me too, I liked that better than this, I'd be a little sad if she's already rejected that!

I'd actually like her to be in that project instead of this because that drama sounds better. Idk, maybe I just don't like the idea of having two robot dramas around the same time because I know that Seo Kang Joon's robot drama will be aired in Nov and this drama premise kinda pop up out of nowhere from MBC.

Hell yeah! I really hope it will happen, the character seems perfect for her.

I think this would be perfect for her too, but what about the other Angel Drama? I wonder if she's choosing between the two.

Hmm... since she knows a lot about cars, her father owned a mechanic shop, and she even wants to have her own shop one day, then... she'll probably somehow get entangled with the robot and end up helping the robot? That'll be cool. They could be bffs! Idk what I'm talking about. Okay, bai~~~

I had so much fun watching her as Gong Shim, I'm looking forward to seeing her again!

I want a geniuuus girl with social awkward personality and 'midas touch' in handling her work as a heroine. She is cooler than the hero. ? Just for once....

Minah was a pleasant surprise in Beautiful Gong-shim. Looking forward to seeing her in this new drama.

Minah! Miss seeing her in my computer screen. Please take the role.

I'm a bit confused. It says the drama will be about a young man who falls in love with a robot. So, the robot is a female? And that is going to be Minah if ever?