Premiere Watch: Manhole, Live Up to Your Name 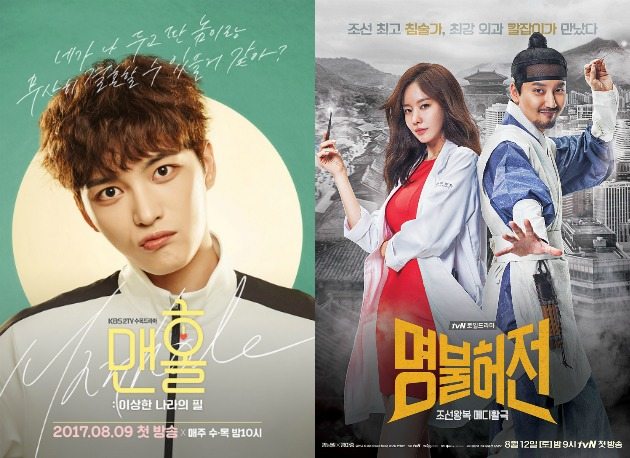 We’ve got two time-travelers headed our way this week and they both seem like hilarious goofballs—one’s a loser and one’s a genius, but you wouldn’t know which is which from the stills alone. Despite the fact that both new dramas this week are fantasy time-slip stories, they’re actually very different in setup, and I’m expecting two very different shows. As a bonus, it looks like they’ll both be delivering on the laughs, which is definitely a welcome thing. 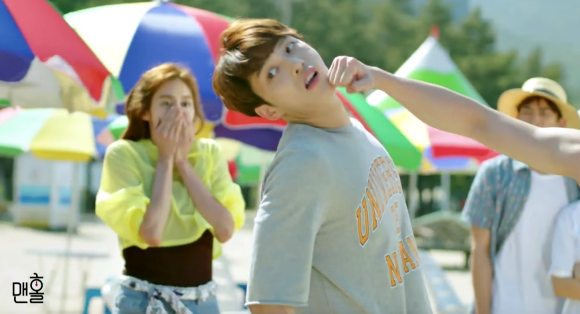 Reasons to watch: This drama looks wacky and fun, thanks to some awesome teasers and a great premise—a slacker gets a wakeup call when the love of his life announces that she’s getting married to another man, and he uses a manhole to travel back and forth in time to prevent the wedding. But the price of his time-travel is that it’s random and he can’t control where he travels to, and every little action he takes in the past changes the present. I can’t wait for the unintended side-effects, which are bound to be hilarious.

This is Jaejoong’s army comeback drama, and I think he’ll be really cute opposite UEE, who’s done a string of dramatic projects in recent years—they’ve earned her cred as a solid dramatic actress, for sure, but I’m looking forward to seeing her do something light and fun again. The producers’ credits are all over the board—PD Park Man-young did family dramas Strange Daughter-in-Law and Sweet Secret, second PD Yoo Young-eun worked on Mystery Queen, and writer Lee Jae-gon comes from the Special Affairs Team TEN franchise—so it looks like fantasy rom-com will be a new realm for them. But I’m already sold on the premise alone for this one. 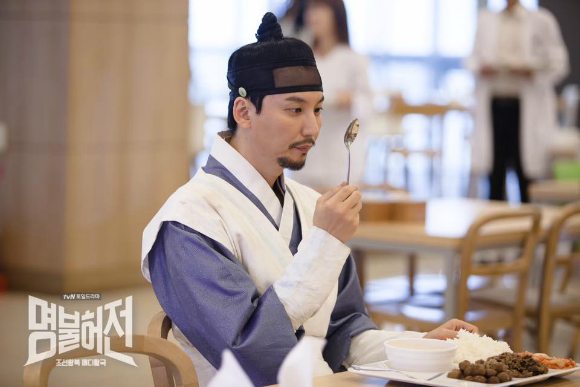 Reasons to watch: Kim Nam-gil. Do we need any other?

This one is all about the fish-out-of-water hijinks, as Kim Nam-gil travels 400 years in time from Joseon to the present and fumbles his way around modern-day Seoul (and ends up looking a bit like a mental patient because of it, hee). He plays real-life historical figure Heo Im, a brilliant acupuncturist, and he’ll butt heads with Kim Ah-joong, a contemporary surgeon. The time-travel element is what keeps this drama from seeming like any other medical drama out there, and from the promo material that’s been released so far, Kim Nam-gil is having a blast with this comedic role.

PD Hong Jong-chan directed the amazing Dear My Friends last year, and writer Kim Eun-hee (not THE Kim Eun-hee of Signal—this one is a different writer) co-wrote Queen’s Classroom. I feel good about the producers and the comic take on the mashup between time-travel, medicine, and romance. But mostly I’m thrilled that Kim Nam-gil is coming back in a sageuk, even if it ends up being for all of five minutes in the premiere.

Tags: Live Up to Your Name, Manhole, Premiere Watch

Live Up to Your Name looks fun, and it'd be a nice change of pace. Hope it is as amusing as the teasers.

Manhole - not a fan of either lead & the whole time travel to deal with failed relationship thing feels slightly done to death.

I feel like I've only ever seen it done poorly in Operation Proposal? I'm wondering where else you've seen it? Anyway, that particular drama left a bad taste in my mouth so I admit to feeling hesitant about this premise, but this drama seems to be a more wacky and comedic take so I'm hoping it'll become an exception for me.

Yay!! Live Up to Your Name.. Please be funny, light and worthy to watch..

Looking forward to Manhole. Please be as funny and wacky and crazy as the teasers promised.

Lol. Reason to watch: Kim Nam-gil. Might check it out just for him.

Definitely watching Manhole though. I love everything about it so far.

I smell a mutant baby drama where the guy's first love is a surgeon and he goes back in time to stop her from marrying the time-traveler from Joseon.

Omg I thought this was good mutant baby drama material too! Now that premise would be something I'd like to watch, so long as the writer has good creds and the girl gets to do some time travelling of her own too. ?

I second this!! That plot would be such a fun drama to watch. Imagine if writers started picking two dramas randomly and combining the plots. The dramas would be way more interesting

I'm looking forward to Manhole premiere!! Can't wait for it. As for Live Up To Your Name, I'll wait for reviews first because I've way too many dramas that I'm watching right now.

I'll check the first two ep of Manhole next weekend (my drama schedule is already full for the week), Live up to your name seems good too , but not enough time so I'll wait the reviews and maybe binge watch it later this year ^^'.

I'm really looking forward to 'Live Up to Your Name'. It looks like a blast! From the 6-minuted extended preview I saw, it looks like the time-traveling hijinks will go both ways. I thought I saw Kim Ah-joong donning hanbok in Joseon as well.

I've looking forward to both of these so much, all thanks to the teasers. Manhole in particular feels like it should be a hoot, but this wouldn't be the first time a good trailer has led me astray. Anyway, fingers crossed!

Do we know who'll be airing these series? DF? Viki?

I'm interested in both but have a sinking feeling I won't be able to view them.

Not sure about 'Manhole', but DF is carrying 'Live Up to Your Name'.

Manhole is KBS so probably the dreaded kocowa... I'm really sick of that site already lol. Still haven't even tried the free trial.

Have your seen my rants? Fan Wall - very short post with the meat in my replies to myself.

Viu is definitely subbing both! At least for SG Viu :)

Looks like DF will not have "Live Up To Your Name After All", at least in the US. This is the message I just got on their site: "Due to last-minute licensing issues, we are not able to make this series available. Still interested in a fun time travel medical drama? Check out Faith or Time Slip Dr. Jin!".

I'm all for Manhole. I might wait before starting Live Up To Your Name because my schedule is already well furnished.

Was at first only planning to watch Live Up to Your Name, but after reading the synopsis of Manhole it looks really interesting too. I do want some light-hearted rom-coms during the week, other than School 2017 and seeing that The King Loves might turn darker soon :"D

sIGH dramas. If only I could have 48 hours a day.

Live Up to Your Name!! I'm so excited. Man-hole looks pretty cool too. Although I am also a little shy after watvhing Operation Proposal. Not that it was a bad drama but there is something so frustrating about watching someone mess up over and over and over...and over! Lolll

Looking forward to BOTH of these shows! <3

Thanks for the timely reminders for both these shows, girlfriday.

MANHOLE wasn't quite on my radar until the past day or two, thanks to a string of intense shows (SEVEN DAY QUEEN, I'm looking at you) -- and "finale fatalities" spread out over more than a month that have bummed me out over the body count. Frankly, the title was much less appealing than the premise at first, although I can see the homage to Alice's Adventures in Wonderland. As long as the manhole in question leads to dry utility tunnels and not sanitary sewers (ewwww!), I'll be happy.

LIVE UP TO YOUR NAME had me at Kim Nam-Gil, along with its reverse-FAITH twist.

I'm grateful that both the shows premiering in the coming week are comedies. I need levity, eye candy, an opportunity to turn off my brain, and total absence of scheming Joseon ministers. Oh, and hold the gummi brain fetuses, please. ;-)

Kim Nam Gil and Lee Jun Ki back in the dramaland in the same time. I'm blessed. I have waited for Live Up to Your Name so please don't disappoint me, Kim Nam Gil!

Looking forward to both! Ready for light, airy, and fun!! And, who doesnt just want to look at Jaejoong.....I mean, really!! I am down for that!! :)

Kim Nam-Gil got me hooked in my first K-Drama, 'Queen Seondeok'. I've never looked back.

not a big fan of manhole, the male lead is too cringy and too clingy